Skip to content
You are here
Home > Advertorial > The perfect label 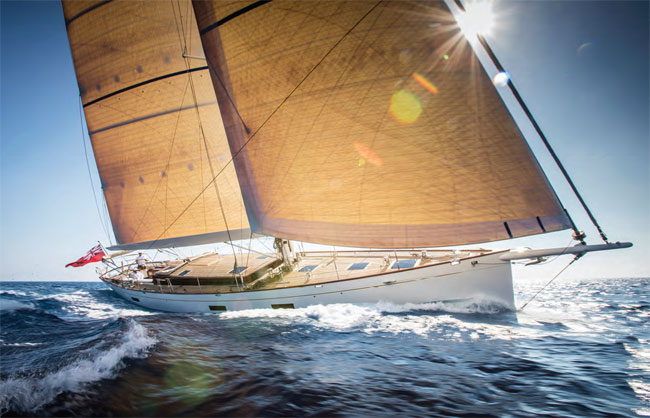 In a still-growing field Mark Speirs’ team at Performance Classic Yachts are doing an exceptional job of delivering genuinely exciting sailing performance with the most elegant blend of aesthetic styles.

To see Performance Classic Yachts’ PC66 as an elegant, sedate, traditionally styled cruiser may be an accurate first impression, but it would also be to seriously underestimate this yacht’s true capabilities.

From the plumb bow and fixed bowsprit alone it is easy to see the design influence of traditional pilot cutters and the smacks of the 19th century. But as your eyes are drawn aft to the angular style of the superstructure, be it either the deckhouse or the flush deck version, along with the long sweeping overhang and the counter stern, each provides subtly different classic details to form an impressive and striking overall appearance that is greater than the sum of the parts. And yet this is a design that is about far more than just looks.

‘The exhilarating feeling one gets from helming a responsive yacht is the exception not the rule these days,’ says PC Yachts’ founder and CEO Mark Speirs. ‘And while we all enjoy charging along in a good stiff breeze, I think the sensation of perfect balance and trim, especially when sailing in light winds, is what separates the ordinary from the excellent. So for me, the ability of the yachts to be first and foremost terrific sailing boats is where we start with all of our models.’

In an era where internal volume and aggressive looks on the outside are two cornerstones of contemporary style and where performance and handling often get pushed further down the list of priorities, it is refreshing to hear of a cruising yacht builder that aligns its priorities in this way. Yet there is still no avoiding the fact that when you see any of their yachts, it is the distinctive looks that grab you first. Under the skin though, such details make their own contribution to a technical specification and performance that will take you by surprise.

While the plumb bow helps to create a long waterline length, the bowsprit allows the genoa tack set at the extremity of the bow, maximising the foretriangle area. The result is a contribution to an impressive sail area -to-displacement (SA:D) ratio that is well in excess of some more modern looking performance cruisers. When it comes to displacement, the PC66 weighs in at around 23,500kg, lower than several of her more modern looking rivals. So, with a decent sail plan, a modest displacement and an impressive ballast figure of 8,500kg, it is clear that the basic data provides evidence that the C66 has the potential to deliver an impressive performance.

The VPP data backs this up. Upwind in 10kts she slices along at 8kts which increases to 9kts in 20kts of true wind. Off the breeze she matches the true wind speed in 10kts at 110° true and peaks at just over 12kts in 20kts true. The PC66 is clearly no slouch.

The concept began after Speirs had been impressed by the distinctive style of the 37ft Wally Nano and commissioned Hoek Design to create a 66-footer in a similar style. After taking delivery and cruising it extensively for two years he received plenty of flattering compliments about his boat, convincing him that there was a market for this type and size of custom-built cruiser. But it was a call from someone he had met on his travels who said that they wanted to build a new 66 that drove the message home. So, as the lines of the next 66 took shape, so PC Yachts was born.

Launched in 2014, PC661 Mazu was built in wood-cored epoxy using West System, while the 2018 PC662 Sultana was built using carbon skins with Gurit Coracell M-foam inside the hull and deck, vacuum bagged and supported by a carbon-reinforced grid system.

Such different construction techniques are a clear indication of the versatility that is possible within the range.

‘We are not tied to one method of construction,’ Speirs explained. ‘Instead, we offer our clients the ability to build in a material of their choice from a West System type epoxy wood core to a full carbon composite layup. We believe it is important to be able to adapt when it comes to construction to allow for the varying amounts of equipment that may be installed.

‘Depending on the core material, hulls can be either built on a male mould (wet layup) or infused in a female mould with decks infused in female tooling.’

This ability to work with a range of construction techniques, along with the contemporary underwater configuration where a shallow canoe body, a fin and bulb keel along with a skegless rudder are the norm, are among the ways in which PC yachts can deliver modern performance.

Indeed, when you look at the deep, secure cockpit, control lines led aft and the large single wheel it is easy to see how this layout inspires confidence in those who are looking for an elegant cruiser that will be as comfortable and secure on a blue water cruise, as it will be oozing elegance during a daysail in the Mediterranean.

‘To me, a boat has to look right and perform well and that cannot be achieved to the level we are looking for by building using chopped strand mat, polyester resin and heavy plywood bulkheads. It is modern materials and structural engineering techniques that help to bring these boats alive. You only have to look at displacements with others in this size range to see how well we compare.

‘As with any modern composite design, structural engineering is very important and here we work with Mark Bishop of Waterfront Composite Solutions. He is based in the USA and is a very experienced composites engineer having worked on projects such as Ran 7, Leopard 3, Azzam Abu Dhabi while working at the Farr office.’

PC Yachts are built in Turkey by Bodrum-based Metur Yacht. Established in 1983, they have considerable experience in cold moulding using the West System and were the first company to do so in Turkey. Since then, their work has expanded into composite construction and numerous Hoek designs, including for André Hoek himself.

The bottom line is that while their striking appearance and compelling performance figures make for a tantalising prospect, PC Yachts are custom-built boats, which in itself can be an intimidating prospect for clients that haven’t been through the process before.

‘Building a custom boat is a dream for some people, and for many in this group it remains just that,’ continues Speirs. ‘Be it the expectation of high costs and/or the complexity of pulling the project together, it’s easy for them to feel that a one-off boat isn’t on the cards. I know how they feel, so I wanted to alleviate these issues and create a process that clients will not just enjoy, but at a price that will compare well with a production boat. And when it comes to the financial concerns about building abroad, our clients’ contracts are with a UK-based company that is the prime contractor responsible for the fulfillment of the contract, to project-manage the build under UK law.’

At €2million (ex tax) for a fully equipped carbon 66 the cost certainly compares well with others in this size range where base prices can often be 30 per cent higher.

When it comes to the 66’s interior, below decks this boat continues to impress with an interior style created along the lines of a New England beach house. Again, it’s a refreshingly different approach that grabs attention the minute you step below.

‘The first 66 was designed for family cruising, so a large owner’s cabin wasn’t required. Instead, there were four spacious double cabins with a crew cabin forward. Boat number two has two guest cabins aft and an owner’s cabin just forward of the mast and a crew cabin in the forepeak.’

While the 66 has been a natural focus of attention, the company is also busy with several other exciting new projects including a PCr 52ft spirit of tradition daysailer/racer with fun written all over it. Once again, performance is at the heart of this design with an ample 108/223m2 sailplan, a displacement of just 8.2 tonnes, a fin and bulb keel that contributes to a 45 per cent ballast ratio and a skegless spade rudder.

Drawn by Chris Peart, this is also a design that embraces sustainability. The hull is planned in stripped cedar with the possibility of using woven flax as the laminate with a plant-based epoxy while the deck itself uses Lignia instead of teak. The electric propulsion will be from Oceanvolt with a power regeneration system and solar panels.

In addition, the company is currently building its smallest boat yet, a 47ft weekender due to be delivered next year for a Japanese client as well as having a 55 in build.

‘In today’s world where so many boats tend to look similar it is difficult for an owner to make their mark on a boat. And of those that do, some create boats that are so different that they date very quickly. We believe our skill is in being able to bring together performance with distinctive yet timeless looks.’