Skip to content
You are here
Home > LATEST > The Ocean Race: Second leg of European tour gets underway from Portugal 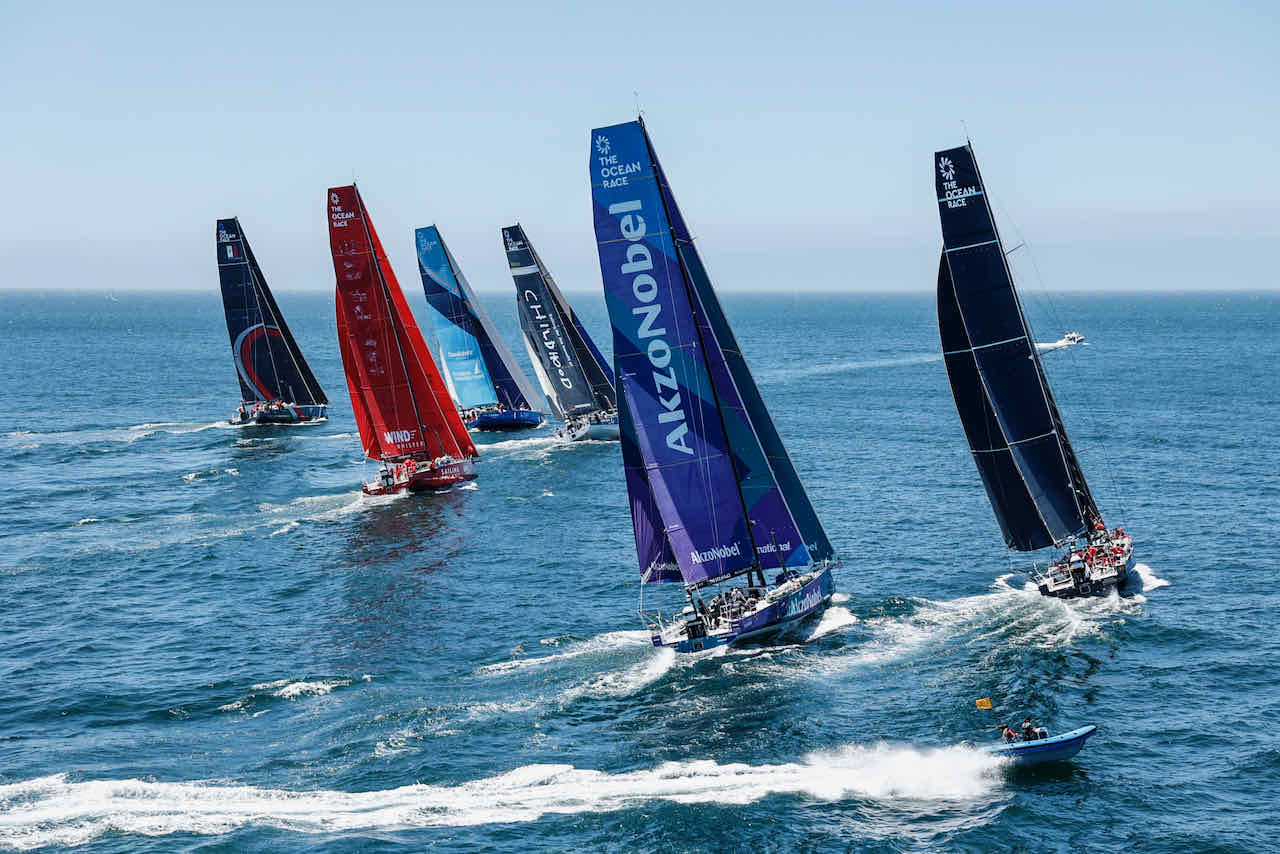 The second leg of The Ocean Race Europe got underway today in Cascais, Portugal where the event’s 12 professional yacht crews representing nine countries from around the world set off on a four-day offshore passage to Alicante, Spain.

Having arrived in Cascais on Wednesday June 2 at the end of the three-day opening stage from Lorient, France the sailors had only a few days to recover before returning to points racing yesterday in a coastal sprint as part of the local Mirpuri Foundation Sailing Trophy regatta hosted by the Clube Naval de Cascais.

Overnight the teams had to quickly switch mindsets from inshore to open water offshore racing as they take on what weather forecasters predict will at times be a wild and windy trip to Alicante, Spain.

The course for leg two sees the fleet pass Portugal’s coastal capital city Lisbon and then south on to Cape St. Vincent, the southwestern-most point in Portugal and Europe.

Here the boats will turn southeast towards the Strait of Gibraltar – the narrow and highly congested waterway which divides the Iberian Peninsula from Morocco in Africa, and marks the entrance to the Mediterranean Sea.

Conditions in the Gibraltar Strait are expected to be fierce, with headwinds peaking to 40 knots on Monday when The Ocean Race Europe yachts are expected to pass through.

Once into the Mediterranean the most direct route is along the Spanish coast to the finish in Alicante. However, depending on the prevailing weather conditions the crews may opt to sail a longer route in the hope of finding better winds that will get them there quicker.

“The wind starts to go up a lot in the Strait of Gibraltar,” said renowned French yachtsman Sébastien Josse who is racing aboard the IMOCA 60 CORUM L’Épargne (FRA) that tops the class standings leaving Cascais.

“We have two options in the Strait: one is to stay in the north on the left coast. It’s maybe a lot of tacks in a narrow zone but with less wind. The second option is to cross the Strait and go to Morocco, but we are in really strong wind – 40 knots and less tacks.

“That’s just a few hours and after that the wind drops completely and we start the new race upwind in light air to Alicante – and we don’t know yet what weather we have.”

Having proved right the old sporting adage of never ever giving up with a surprise win in the VO65 class on leg one, the skipper of The Austrian Ocean Race Project, Gerwin Jansen, said his young crew would be giving their all like always on the way to Alicante.

“We enjoyed the win like we should,” Jansen said. “But we have also tried to get the expectations down a little bit. It’s not quite normal that the young team wins like that for the very first race. So now we are ready for leg two, we’re going to try to push as hard as we can.”

“It’s going to be downwind sailing to the southern part of Portugal. Then we go into the Straits of Gibraltar and we’re looking at pretty strong winds upwind with choppy waves. So it’s going to be tough on the crew, tough on the boat, and we have to survive the fight.”

After a short delay to allow a new breeze to stabilise IMOCA 60s were the first fleet to start leg two, with all five boats powering off the line on a short fast northwest reach to a turning buoy marking the exit point from Cascais, where Thomas Ruyant’s LinkedOut was the first to round.

“We’ve been able to confirm through race management that everybody on that motorboat is okay and we sent a group of our support team to accompany them into the marina, which they were able to do unassisted and under their own power. I can also confirm that everyone on our crew is also okay,” said Charlie Enright, the skipper of the 11th Hour Racing Team.

“We take full responsibility for what happened on the water today. We are back in the marina assessing exactly what happened to our boat. We’ve definitely sustained some damage to our port foil. We’re working with the shore team and the design team to see what that means for our participation.”

After approximately two hours ashore, the team signalled its intent to restart the leg later on Sunday evening.

Meanwhile, the seven VO65s were a spectacular sight as they lined up in close formation on the first reach. As if to prove that their leg one win was no fluke The Austrian Ocean Race Project crew got the jump off the line to lead the VO65s at the Cascais exit mark.

Before leaving the dock in Cascais a baton from the Relay4Nature initiative was passed from the Portuguese Mirpuri Foundation Racing Team VO65 skipper Yoann Richomme (FRA) to Chris Nicholson (AUS) skipper of the Dutch AkzoNobel Ocean Racing VO65.

The Relay4Nature is a baton relay for the ocean, which aims to encourage world leaders to radically increase their ambition for nature, human and ocean rights across all policy and actions and to unite for stronger ocean governance.

On leg one from Lorient the Relay4Nature baton was carried aboard the winning IMOCA 60 11th Hour Racing Team (USA) and passed to the Mirpuri Foundation Racing Team by Swiss crew member Justine Mettraux.

Based on the latest weather models the teams are predicted to complete leg two in four days, and so are expected to arrive in Alicante on Thursday June 9.