A brand-new German ocean racing team aiming to compete in the next edition of The Ocean Race around the world in 2021-22 will race for the first time next weekend in the 605-mile Rolex Fastnet Race.

The founders of Offshore Team Germany are hoping to rekindle the spirit of the legendary German syndicate Illbruck Challenge which famously won the 2001-02 Volvo Ocean Race aboard a Whitbread 60 skippered by American John Kosteki.

The ceremony was a major milestone for the campaign and marked a two-and-a-half year project to get the IMOCA 60 to its current state.

In Spring this year the boat was handed over to Jeff Brown in Gosport, England. Brown – an IMOCA 60 expert, having been a former project manager for Alex Thomson Racing – completed the final fit-out including installing a new keel, along with new rigging and electronics.

For the team’s first competitive outing in the Rolex Fastnet Race starting on Saturday August 3rd, they will race with five sailors and one on board reporter – as per the IMOCA 60 fully-crewed rule to be used in The Ocean Race. 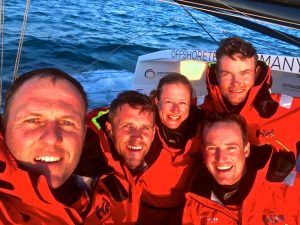 The boat will be racing using conventional straight dagger boards, but the team plan to design and build foiling boards to use when they take on The Ocean Race.

“After the route of the upcoming The Ocean Race is revealed, we will start with the design of the foils. And then we still have a lot of time for preparation,” says Kuphal. “There will be a large fleet of IMOCAs for the Fastnet Race. But we are the only ones sailing in fully crewed mode to find out what The Ocean Race could feel like.”