Skip to content
You are here
Home > LATEST > The Ocean Race: Offshore Team Germany hold their nerve for IMOCA class victory in Genova 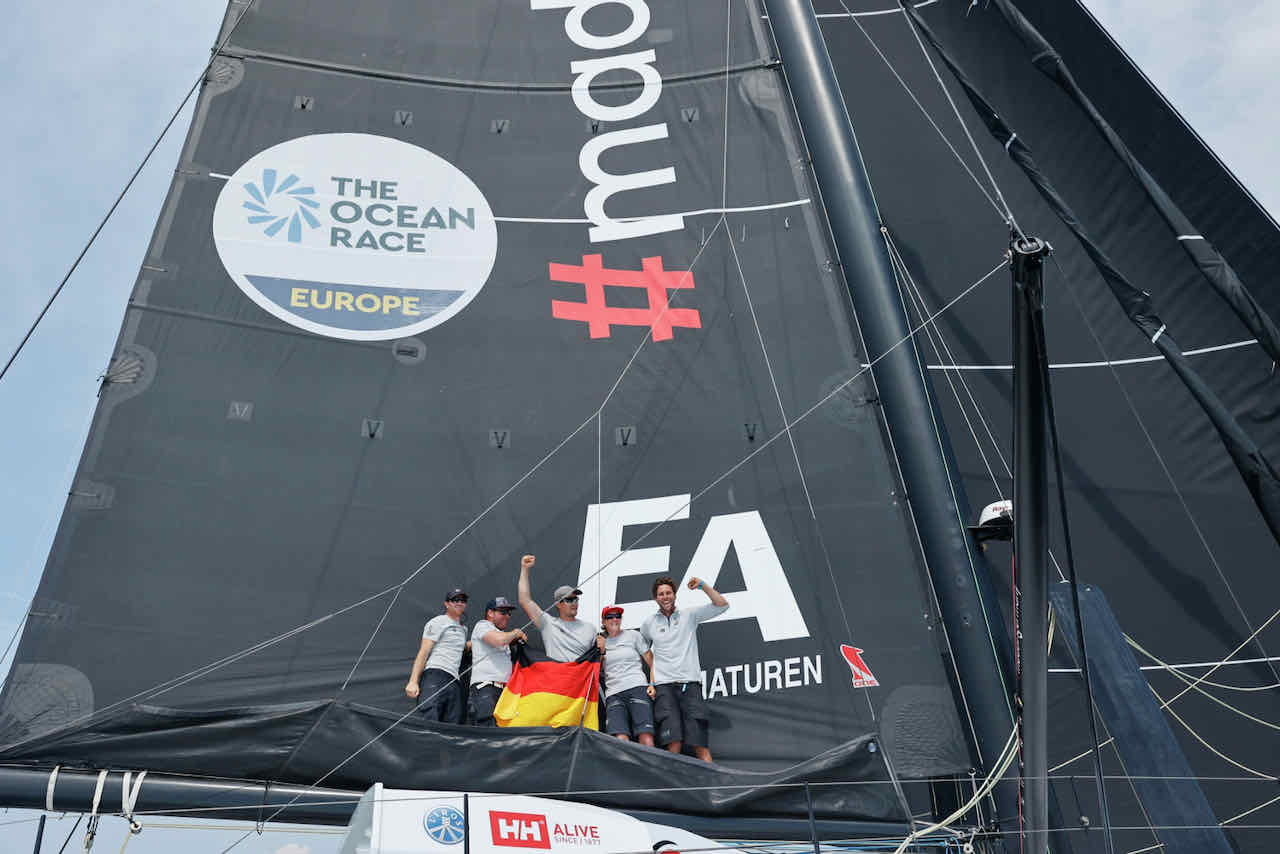 Offshore Team Germany – the non-foiling IMOCA 60 skippered by German Olympian Robert Stanjek – has pulled off a spectacular victory in the third and final offshore leg of The Ocean Race Europe.

After almost four days of racing since leaving Alicante, Spain on Sunday afternoon the German team arrived in Genova, Italy at 0936 UTC / 1136 CEST locally today, having taken full advantage of their yacht’s superior light wind performance compared to the four other foil-equipped entries.

Stanjek and his crew – navigator Benjamin Dutreux (FRA), Annie Lush (GBR), Phillip Kasüske (GER), and onboard reporter Felix Diemer (GER) – made an early split away from the rest of the fleet when they headed north soon after leaving Alicante.

Despite some slowdowns in the light and patchy winds around the Balearic Islands, Offshore Team Germany were mostly able to make steady progress along the 600-nautical mile (nm) / 1100-kilometre (km) course and at one point had opened up a close to 100nm/185km lead over the chasing pack.

That lead was eroded considerably in the last 36 hours as the foilers found some stronger breeze that allowed them to sail closer to their true potential, but when the German entry crossed the line in the Gulf of Genova this morning the chasing pack was still over 20nm/37km away.

© Sailing Energy/The Ocean Race
“Actually, it was not our plan to escape from the fleet, but sometimes things turn out a bit different than you plan it,” Stanjek said. “All our routings were north of the Balearics and so this was, for us, a clear call – and I thought some other teams would decide the same.

“We climbed up the Spanish coastline north and then we found a lane offshore with good pressure, and all of a sudden we lifted from the fleet like crazy. Within five or six hours the split was so massive and for us it was a gift. Since that moment, we were aware that we have to sail our own race because the difference between the fleet and us was already 50 miles.

“But this race was about so much more than the hardware,” Stanjek said. “I think one of the key factors to me was Benjamin [Dutreux] in this race. He’s a very good navigator, very clear and tough strategist. I think we both worked well together. It was probably me doing a little bit more the risk management on his advice – but he did a great, great job.

“And the whole team also stayed focused and awake. We had difficult parts in the race where everyone closed in, and we had no breeze at all. Sailing upwind in an IMOCA in three knots is not really fun.

“This is just the start of let’s call it a second career. I’m not a standard offshore sailor. I’ve raced in the Olympic classes for a long, long time. But after the Olympics, I started to enjoy offshore sailing. So I hope this race will bring us closer to the start to the next Ocean Race. I can’t actually wait to to get to the starting line.”

Second place in the IMOCAs went to the blue hulled LinkedOut, whose skipper Thomas Ruyant had been downbeat before the leg about his boat’s chances of performing well in the forecast ultra-light wind passage.

Nevertheless, Ruyant’s crew, who led the fleet offshore last night in search of more wind, were today able to overhaul the American 11th Hour Racing Team in a drag race on the approach to Genova.

The points awarded to the top three IMOCA finishers in this leg mean that each of Germany, LinkedOut and 11th Hour Racing Team will have an opportunity to win The Ocean Race Europe with the right result in the Coastal Race on Saturday (see below).

Two boats finished early in the evening on Thursday, with Bureau Vallée drifting across the line ahead of CORUM L’Epargne, who were finished in place when the Race Committee shortened the course and awarded them fifth place for the leg.

Earlier today, it was the Mirpuri Foundation Racing Team earning a spectacular come from behind win in the VO65 class over AkzoNobel Ocean Racing and Sailing Poland.

For the weary sailors, Friday holds the promise of a quieter day of scheduled, local pro-am sailing.

But the pressure stays on as today’s results mean both the IMOCA and VO65 podium positions for The Ocean Race Europe will be decided by the results of Saturday’s Coastal Race. Bonus points are awarded to the top three finishers in each class – 3 points for a win, 2 points for second, and a single point for third place. With the standings so close, Saturday’s results will determine the winners of The Ocean Race Europe trophy.