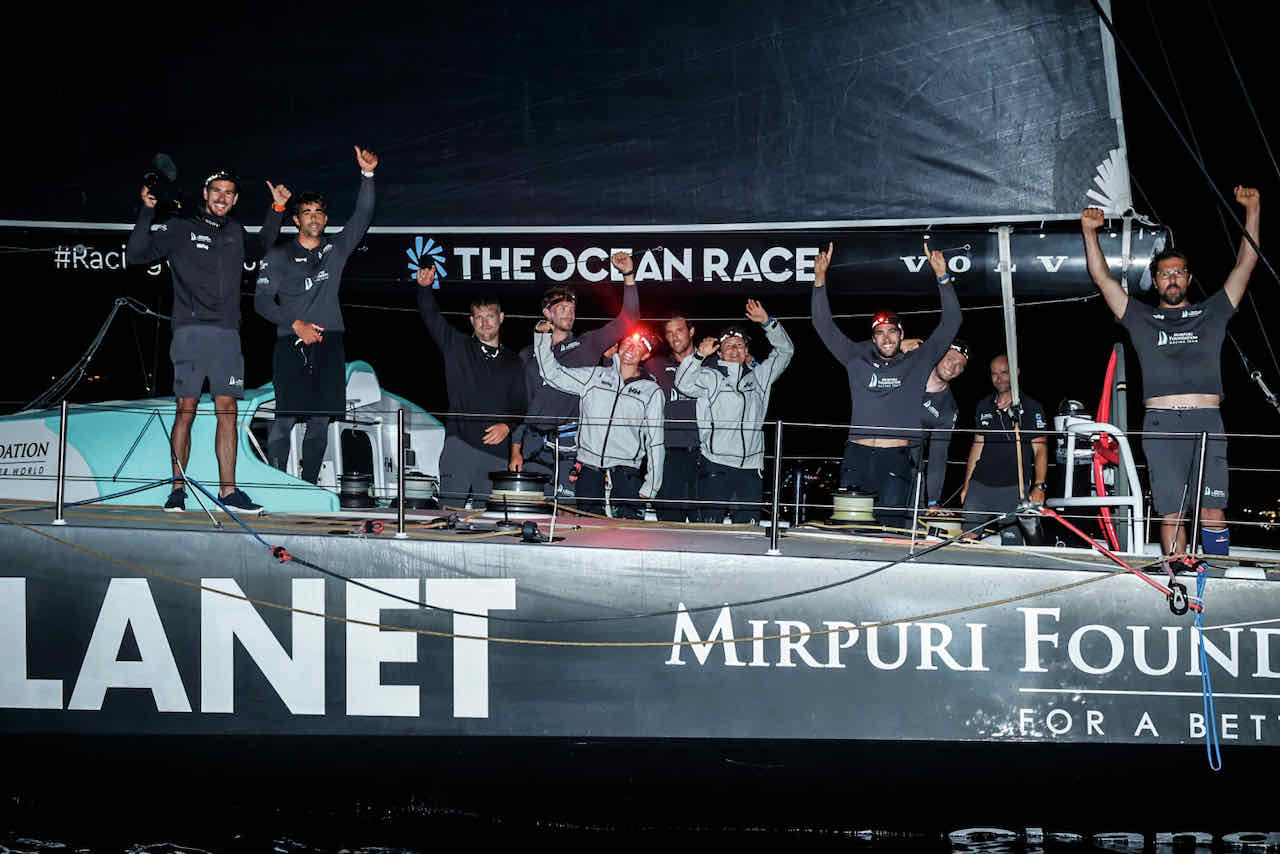 The third and final offshore leg of The Ocean Race Europe came to an exciting conclusion in the early hours of Thursday morning in Genoa, Italy when the Portuguese entry Mirpuri Foundation Racing Team pulled off a come-from-behind victory in the VO65 class.

It was pitch black in Genova when the Portuguese team, led by eminent French offshore skipper Yoann Richomme, finished the 600 nautical-mile (nm) / 1100-kilometre Mediterranean leg from Alicante, Spain at 00:51:57 local time, after around three and a half days of racing – predominantly in light and fickle winds – since leaving Alicante on Sunday.

Hours earlier Richomme’s crew – who started leg three tied on 11 points with AkzoNobel Ocean Racing at the top of the VO65 leader board – had been in third place, 10nm/12km behind the long-time fleet leader Sailing Poland (POL), skippered by Bouwe Bekking (NED), and four nautical miles adrift of the second placed Netherlands entry Team Childhood I, led by Dutchman Simeon Tienpont.

Sensing that the breeze along the Italian coast would fade away as night fell, the Portuguese team made the bold decision to tack away from the fleet in search of new wind further offshore. It was a move that looked risky initially, especially given that their heading initially appeared to be taking them away from the finish line.

Ultimately the gambit paid huge dividends as they were eventually able to tack back towards Genoa in the best breeze of the evening, and within a couple of hours had leapfrogged themselves into the lead.

“What a comeback!” Richomme exclaimed shortly after the finish. “A crazy, crazy leg – it felt like two weeks of sailing. We fought hard. We knew that until the finish it wouldn’t be over because Genova is complicated. It’s more of a game of chess in these conditions than proper sailing.

“The crew was amazing, we kept on fighting all the way, very calm. Team Poland moved into the lead with a tiny move near Mallorca and we thought we would never get them back.

“But we knew there was a little move to do in the Gulf of Genoa. We knew it was the favoured side, but then all the others kept on moving inside the bay. We thought it wasn’t going to happen for us and then suddenly things turned.

“We knew we were in the right position, but we didn’t expect to overtake Team Poland and win it – we thought we would be fighting for second.”

The Netherlands team was in fifth place before heading offshore in parallel with Mirpuri Foundation Racing Team, but soon moved up to second as the new breeze brought them powering in from the southeast at speeds over 13 knots, overtaking Erik Brockmann’s Viva Mexico (MEX), Team Childhood I, and Sailing Poland to take second place.

“This was a big relief,” Nicholson said moments after stepping off the AkzoNobel boat. “We got ourselves behind early on in this leg and when that happens all you hope for is another chance. Fortunately, there was plenty of opportunity to be had today and we grabbed hold of several of them.

“There was plenty of thought that went into it. Our routing and everything we had told us to go the way we did go. But sailor’s instinct would have sent us closer to the shore. For once, I listened to the science, and in the end we chose what we thought had the best chance of success.”

In contrast to the excitement aboard the first two finishers, the Sailing Poland crew, who had led the VO65s since early in the leg, dropped back to third place but were able to salvage a podium position and enough points to still have the potential for an overall race victory with a win in the Genova Coastal Race on Saturday.

With the Leg 3 victory, the Mirpuri Foundation Racing Team consolidates its position at the top of the leader board on 18 points, with AkzoNobel Ocean Racing second on 17 points and Sailing Poland hanging with the leaders on 15 points.

This sets up Saturday’s final coastal race – where points will be awarded to the top three teams only (3 points for a win, 2 points for second, 1 point for third) – as a showdown to decide the overall VO65 class standings in the inaugural edition of The Ocean Race Europe.

Team Childhood finished close on the heels of the Polish team to secure fourth place, ahead of Viva Mexico and AmberSail2. The Austrian Ocean Race Project were beset by calms on final approach to the finish line, but ghosted across in seventh place just before 10am local time.

The IMOCA 60 fleet is expected to start arriving in Genoa from early afternoon local time. At 10am local time, the leader, Robert Stanjek’s Offshore Team Germany (GER), had just 9 miles left to run with the chasing pack of IMOCAs some 30+ miles back.