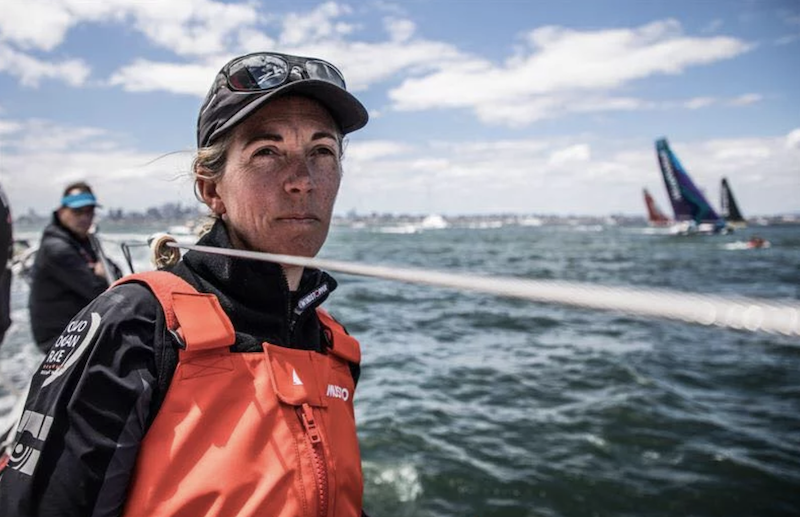 British professional weather forecaster and ocean racing navigator Libby Greenhalgh made her name in The Ocean Race during the 2014-15 edition when she took the navigators seat aboard the all-female entry Team SCA. In the last race she was called on to take over as navigator of the Hong Kong entry Team Scallywag from Cape Town onwards.

In the latest of our exclusive series of interviews with Ocean Race sailors past and present we quiz Greenhalgh on the challenge facing the teams in the next edition which is scheduled to start in the Autumn of 2021.

The two things that struck me were firstly that the leg from Cape Town, South Africa to Shenzhen, China will be an absolute monster, and secondly the number of stops there are going to be in Europe.

The big leg to Shenzhen is going to take in excess of 30 days and covers new waters for the race. For me that’s exciting as it is an area of the ocean that you don’t normally necessarily rush to traverse – but ten that makes it interesting and exciting. That said though, it is likely to be slooooow at times.

The number of European stops means that after racing around the world you have these mini races at the end which are super intense and almost more knackering than the longer legs. This can be difficult to deal with because you have already done so much to get that point and then the race can be decided in the short, fast blasts.

It will be interesting to see whether the Cape Verde stop opens up an easterly option on the in the Atlantic. There was chat about this in the last race with the removal of Fernando de Noronha [off Brazil] as a passing island.

Racing around Indonesia and across the South China Sea is going to be challenging on the leg from South Africa to China.

Two less pitstops doesn’t overly count from a sailing perspective, but from a logistical point of view, yes it does. Probably the biggest impact will be the turn-around time after some of the bigger legs. Thinking back to the Melbourne to Hong Kong and Hong Kong to Auckland turn arounds last time, these were long legs in quick succession and a lot of teams did a bit of a reset in the Auckland stopover when they finally caught their breath. So perhaps teams will be a bit more rested next time around.

I guess this leg is popular because it has a bit of everything, plus everyone is generally excited for the off at the very start of the race around the world. The Cabo Verde stop is interesting because normally you are trying to pick your way around them, or through them so you can get set up for your westerly position to cross the Doldrums.

I think it is going to keep this leg a lot closer potentially, as a small split at this point can amount to a lot the other side. Possibly people will be running the routing to see if the easterly option is there and in the 60s they might even have considered this in their boat design. But – given the design and types of boat – I think generally there will be the usual trying to squeeze a bit further west and off you go.

The leg from Cape Town to Shenzhen, China will be testing for the crews as is features plenty of Southern Ocean sailing as well as taking the fleet through the Java Sea for the first time. What are your thoughts on that leg?

Much like the previous dashes to Abu Dhabi, coming out of Cape Town and pushing south into what we call the Southern Ocean to catch the first system will be key. Deciding when to turn left and head north out of the Southern Ocean will be the first major call. Much like the South Atlantic St Helena High, there is the South Indian Ocean High that will be the first system to try and negotiate by – ideally – sling-shotting around the bottom of it and then turning north towards Indonesia when you have almost made Australia.

Crossing the doldrums will be tricky and unpredictable – much like it always is – but finding a narrow point or the best place is where historical research will come in handy. However you will also be dictated to by your positioning as you will need to cut through Indonesia into the Java Sea leaving Borneo to starboard before entering the next minefield.

That minefield being the South China Sea and from this angle of approach you could be tempted to go much nearer to, around, or even through the Paracel Islands and Spratly Islands. That will come with political problems as well as the problem that the area has not really been charted. I am sure there are some fairly interesting stories from the Volvo 70 days when they went to Qingdao!! The timing means it will likely be in the winter season down there and no monsoons. It could be a pretty chilly finish!!!

The biggest difference here is the need to get north to go around the UK. Generally on the transatlantic route you often get close to the ice off Greenland, and on this next one they will almost certainly have more chance of seeing ice here than the Southern Ocean.
Weather system patterns can vary so much at that time of year over northern Europe and so there will be doubtless be plenty of practice routing going on to look at all the different possible obstacles on the way across.

It’s good to see a longer final leg and this will be a tough one with some very different stop start points – due to tidal gates and shipping lane restrictions – dominating decisions early on and potentially creating splits in the fleet as it crosses the Bay of Biscay. There could be opportunities to pick up thermal conditions along the Portuguese coast and after squeezing in through the Straits of Gibraltar it could be a case of rolling your lucky dice in the Mediterranean where there will be coastal hoping transitions. It will be a super tough finish for the crews.

To finish off, is there anything you would like to comment on regarding the course or the next edition of the race? Please feel free to answer any questions you think we should have asked!

The course was always going to be the same but different and it is nice to see the introduction of some slightly different legs.

I guess the big question is how the legs will be scored? Will it be a case of ‘double or bust’ points for the big legs and on the final leg?