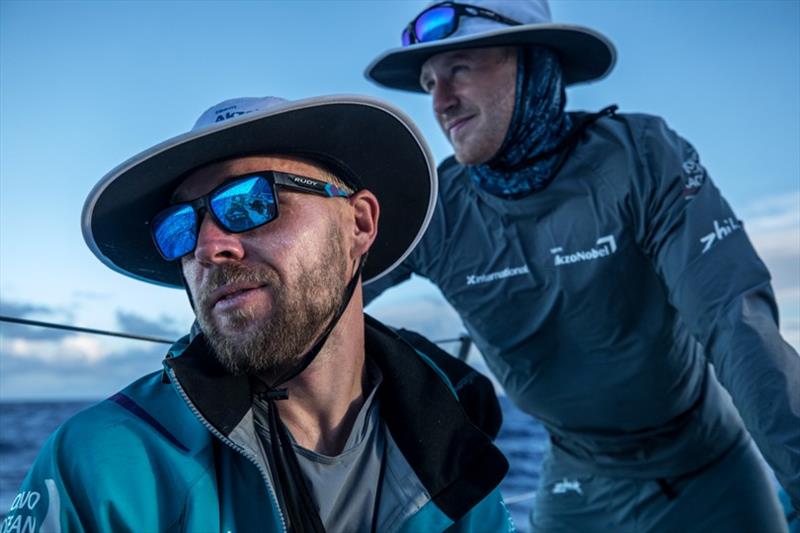 All true sports fans want to get closer to their favourite sportsman or sports woman. They want to know how their heroes are feeling, what they are thinking, to understand their challenges and how they motivate themselves on and off the field of play.

Professional sportspeople around the world have been quick to recognise this demand and most make effective use of their social media channels to interact directly with their fans and to help build their individual brand identities.

Although it’s the mainstream sports that have the biggest social media footprints, the sport of ocean racing is one of the very few that can connect the fans to the competitors while they are engaged in the heat of the competition.

Driven largely by the need to find a way of keeping people engaged with racing that takes place predominantly out of sight of land, The Ocean Race has pioneered the use of embedded journalists who capture the on-board action – good and bad – and beam it back to us fans back ashore.

Although (aside from the extreme working conditions) this sounds like a simple enough brief – just film, photograph and write about what’s happening on board each day – doing that for up to three weeks at sea requires considerable preplanning. Most OBRs leave the dock each leg of the race with a structured editorial plan of some sort to help them avoid running out of creative ideas mid-ocean.

As is often the case with the creative process, sometimes an idea can unexpectedly morph into something much better than the original concept. This certainly was the case with team AkzoNobel in the last edition of The Ocean Race, when for Leg 2 from Lisbon to Cape Town OBR James Blake was tasked with producing a candid three-minute weekly wrap up of the crew’s highs and lows of the previous seven days.

The idea was to break the leg into a number of stages by having different members of the crew on camera talking fans through the critical moments of the previous week. Cut in some nice action footage and there you have it, a nice piece of engaging social media content.

“Have some fun with it,” Blake was told. “Feel free to get creative!”

So that is exactly what he did.

Certain that if he stuck to the letter of the original brief the end result would be staid and boring, Blake opted to collaborate with the team’s Danish boat captain Nicolai Sehested and bowman Brad Farrand from New Zealand to come up with something more entertaining.

It is worth noting here that although the two sailors differed personality-wise – Sehested’s outward persona being serious and focused, while Farrand came across as affable and light-hearted – the two were close long-time friends who has sailed and travelled together a great deal.

What the trio came up with turned out to be a hilarious segment called “How was you week?” where the Sehested and Farrand sat together – typically eating freeze-dried food – to discuss their last week at sea.

The conversation revolved around a set of funny video clips Blake had put to one side from his hours of filming around the boat (think Blooper Reel) – beginning with a close up of Sehested turning his head on deck to unexpectedly receive his birthday cake in full in the face.

“I thought that was what you do in Denmark,” Farrand says semi-sympathetically after the clip.

The gags are largely visual, so take a look at this first episode for yourself to get a proper feel for the content.

Although all three were happy with what they had produced Blake was a little nervous when he sent the package back to race HQ via the Inmarsat satellite network, wondering if he had strayed a little too far from the original brief.

His fears were unfounded though as the communications team instantly recognised the segment’s potential to evolve into a popular long-running and potentially viral social media series. That, in fact, is pretty much what happened.

Encouraged – perhaps better to say egged on – by the communications team, Blake, Sehested and Farrand went on to produce “How was your week?” videos for the rest of the race (despite Blake on occasion being rotated out to other teams).

The series became some of the team’s most popular online content and even got the two sailors recognised in the street at some of the race stopovers around the world.

Aside from the skilful filming and editing of Blake and other OBRs, the videos worked so well primarily because they were fun to watch. Much of the reason for that was that Sehested and Farrand’s obvious close friendship shone through in every one of them.

Although the dialogue was clearly pre-agreed the truth was that the pair were not really ‘acting’ as this was largely how they behaved with each other every day anyway, whether the camera was on or off. They were just two good mates having fun together, sharing a huge adventure and making the best of the good times and the bad times as they came along.

The fans could see that – and they loved them for it.