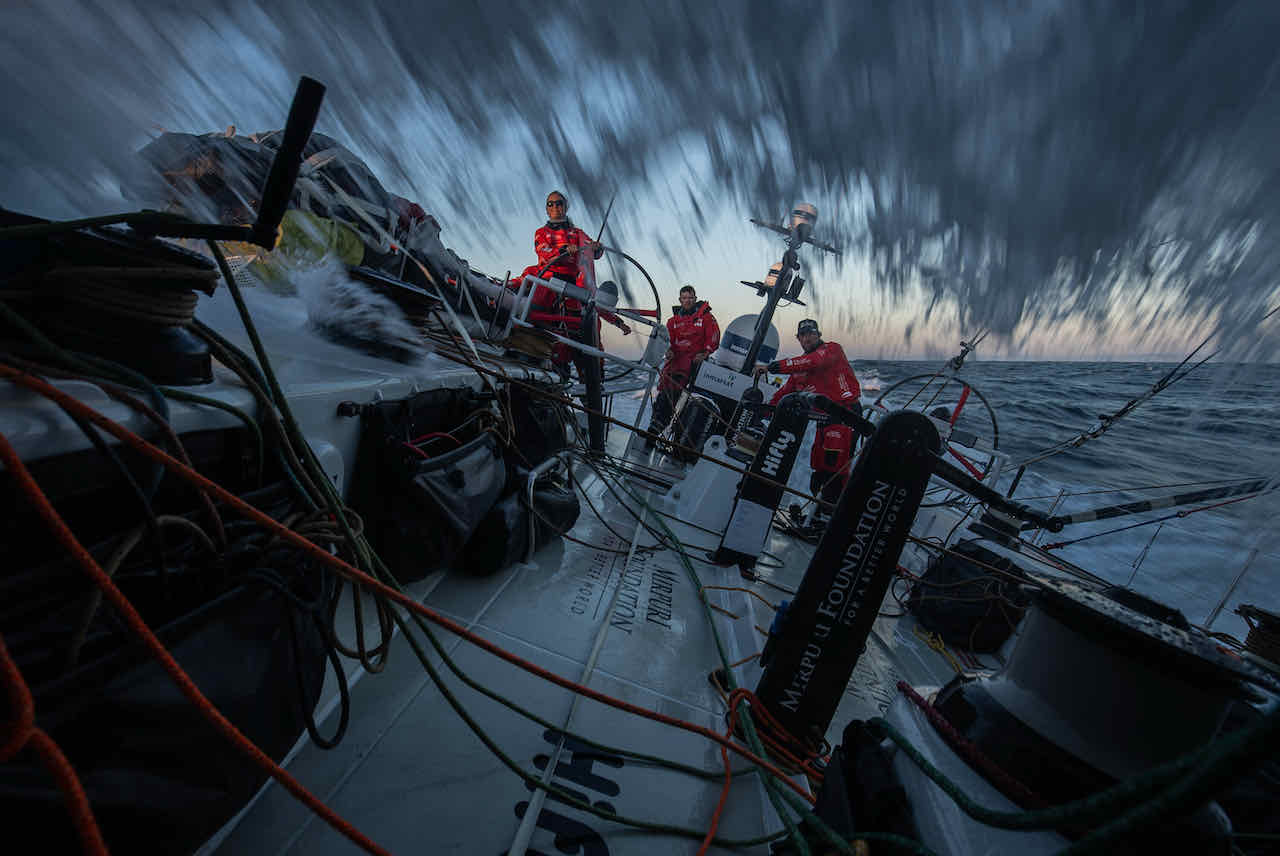 Freshening winds off the northwest tip of Spain have meant significantly faster sailing for the 12 professional crews representing nine countries racing from Lorient, France to Cascais, Portugal on the opening leg of The Ocean Race Europe.

After spending much of the first night and day of the leg engaged in a prolonged series of gybes criss-crossing the Bay of Biscay in light to moderate breezes, since passing the longitude of Cape Finisterre yesterday evening the crews have been enjoying straight-line sailing as they head almost directly west towards the turning mark – a virtual waypoint out in the Atlantic.

Thomas Ruyant’s French foiling IMOCA 60 LinkedOut was the first boat to make the final gybe to the west at around yesterday afternoon, followed almost instantaneously by the US-flagged 11th Hour Racing Team, skippered by Charlie Enright.

As the breeze steadily ramped up this pair were soon ripping westward in close formation, and overnight both crews locked into a nice angle and sea state that, for a couple of hours at least, saw the leading IMOCA boats averaging close to 27 knots of boat speed. Those are impressive performance stats and a significant early indicator of the performance potential when racing IMOCA 60s fully-crewed. Extrapolated over 24 hours, it would be a record-breaking pace.

“Last night was fast – really fast,” said Seb Josse from on board CORUM L’Epargne, in fourth place on the IMOCA leaderboard as of Monday afternoon. “We were going at over 30 knots. But now the wind is starting to drop a little bit… We have to manage the transitions as the wind will ease off and go to the left, so we can expect to use a bigger headsail, and to have really light winds. But the transitions will be really quick… and during the next night it should be really fast (again).”

Josse is referring to a weather transition bringing lighter winds that will likely see the backmarkers closing the gap as the leaders approach the turning mark. But conditions are forecast to strengthen again as the fleet gybes through a left hand turn and sets up on the layline towards the finish off Cascais, Portugal.

In the VO65 fleet, the Mirpuri Foundation Racing Team from Portugal remains in control of the seven-boat fleet today with an 11 nautical mile (nm) lead over the Dutch-flagged AkzoNobel Ocean Racing, skippered by Chris Nicholson, in second.

Speeds across this fleet of identical boats have remained very even, with all the crews pushing their boats at over 21 knots and just 10 miles separating the top five boats.

“It’s fascinating how the teams are so close, even after like twenty five, twenty seven hours of racing, you wake up after your shift, you go on deck and you see the other teams so close to each other,” said Deimantė Jarmalavičiūtė from AmberSail-2. “And being in the ocean, it’s an amazing feeling.”

With fast reaching conditions forecast to resume on the way back from the Atlantic turning mark the estimated time of arrival in Cascais for the first boats home remains near midday on Wednesday June 2.