Skip to content
You are here
Home > LATEST > The Ocean Race: All to play for during final night at sea for European race fleet 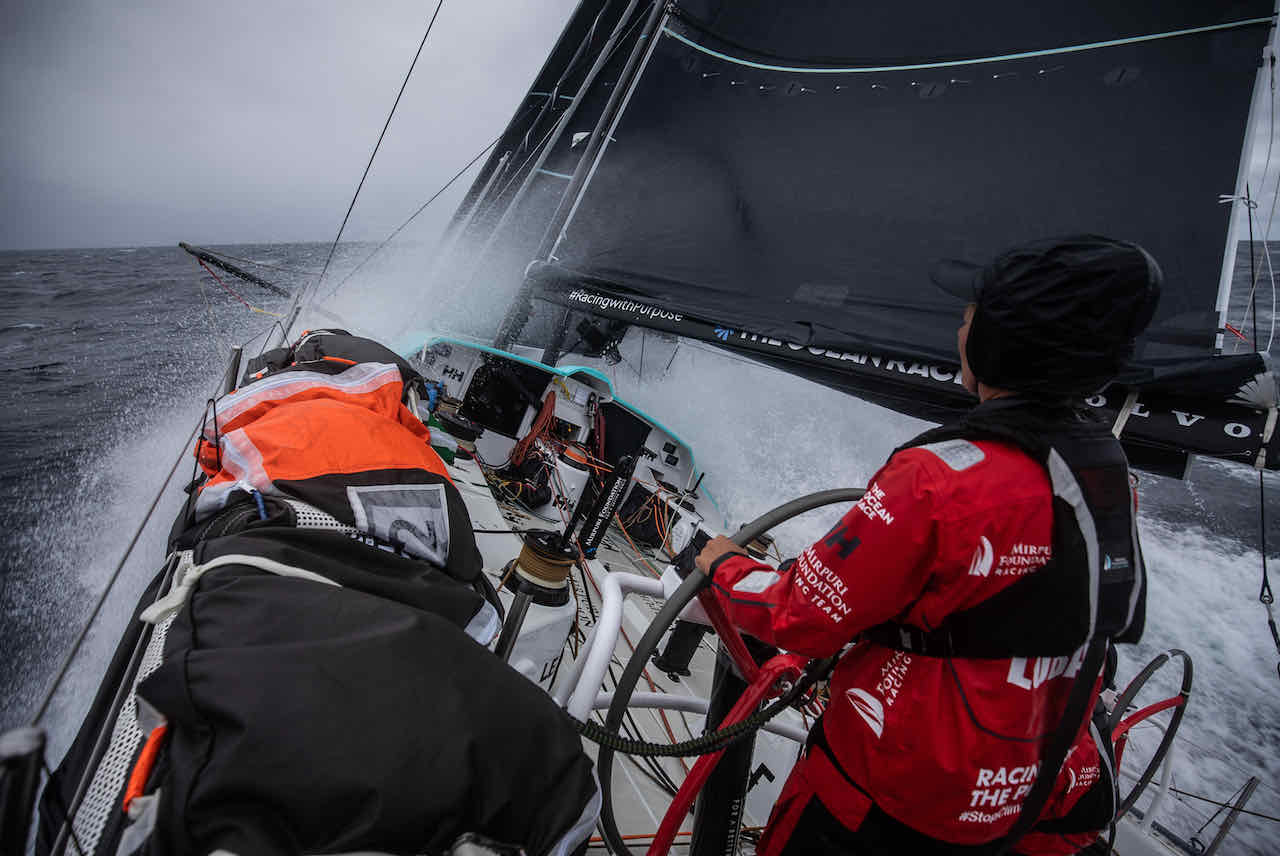 After an adrenaline-fuelled day of power reaching through the Atlantic the 12 weary crews competing in The Ocean Race Europe are facing a challenging final night at sea as they close in on Cascais, Portugal – the finish of the race’s opening leg from Lorient, France.

The northerly winds strengthened as the fleet rounded the virtual Atlantic turning mark early this morning, and that meant some exhilarating high-speed sailing for the crews in both the one-design VO65s and the development rule IMOCA 60 class as they headed back towards Cascais.

In the IMOCA 60 class, the fierce foiling match race between Thomas Ruyant’s French entry LinkedOut and the American 11th Hour Racing Team, skippered by Charlie Enright, continued to rage. The two boats were neck-and-neck on the way out the turning mark with the American boat getting there just ahead at around 0140 UTC.

From there the narrowly separated duo raced flat out towards Cascais at speeds touching 30 knots as they traded the lead back and forth several times.

At around 1100 UTC on Tuesday the LinkedIn crew appeared to seize the initiative by gybing away to the south – apparently in an effort to stay in the strongest winds. The move did not go un-noticed by their rivals and the 11th Hour Racing crew followed suit some 40 minutes later.

Both crews are pushing their foiling boats hard and the two IMOCA 60s were clocked at speeds up to 25 knots this afternoon. Positioned slightly nearer to the finish line than the French crew on LinkedOut, 11th Hour Racing top the leader board Tuesday afternoon, but with plenty of racing action to go before they reach the finish line in Cascais the final result is still in doubt.

In the VO65s, Portugal’s Mirpuri Foundation Racing Team skippered by Yoann Richomme continues to sail a near perfect race at the front of the seven-boat fleet. The team rounded the virtual turning mark around 30 minutes ahead of the second-placed Dutch entry AkzoNobel Ocean Racing – skippered by Chris Nicholson – with Bouwe Bekking’s Sailing Poland, and Simeon Tienpont’s Childhood I (NED) also in hot pursuit.

“It’s been pretty windy since yesterday afternoon and we rounded the virtual waypoint a few hours ago and we’re heading back to Cascais now,” said Jack Bouttell, watch captain on the Mirpuri Foundation Racing Team boat. “It should be a very wet and windy day, I think.

“We’re leading the 65 fleet… So I think we’re in a pretty good spot. I think the main stress will now be just obviously going fast today, but then in the approach into Cascais it gets light again and managing that will be the last big hurdle I would say.”

It is noticeable on the race tracker that AkzoNobel Ocean Racing has been sailing a lower and slightly faster course than their rivals ahead and astern. As the day wore on their southerly track steadily increased the lateral separation between them and the other three VO65s.

In terms of distance to the finish, this dropped them down to third behind Sailing Poland, but given the gybe to the south executed further down the track by the two leading IMOCA 60s, it could be that the AkzoNobel Ocean Racing crew have positioned themselves well to make gains during the hours of darkness. Only time will tell, but as in the IMOCA 60 fleet the battle for line honours looks likely to go right down to the wire.

The ETA in Cascais will be influenced by conditions near the finish. Estimates for the first finish range from 0800 local time (UTC+1) to around noon. The full fleet should arrive within about four hours from first to final boat across the line.