Skip to content
You are here
Home > Recommended > The Ocean Race: Aarhus, Denmark announced as stopover for 2021-12 edition 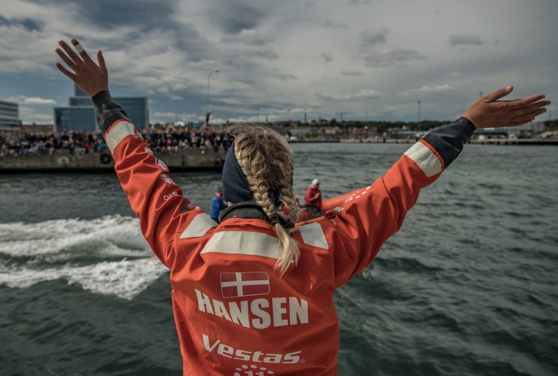 The organisers of The Ocean Race have revealed the first of the stopover cities for the next edition of the fully-crewed race around the world.

Although there is no confirmation at this stage of the overall racecourse for the next race – due to start from Alicante in the winter of 2021 – the Danish city of Aarhus has this week been confirmed as a full stopover venue.

Aarhus’ inclusion is not a major surprise after hosting a successful and popular “fly-by” of the fleet in the last race on the way from Gothenburg, Sweden to race finish at The Hague in the Netherlands last June, when huge crowds turned out to watch the six-boat fleet round a turning mark in the middle of the harbour at the centre of the city.

The Aarhus fly-by was a special moment for the two Danish sailors in the race – Nicolai Sehested, boat captain on Dutch entry team AkzoNobel, and Jena Mai Hansen on the Danish and American-flagged Vestas 11th Hour Racing.

“Aarhus is a modern, innovative city, with strong historical ties to the ocean and to sailing – as we saw when this same facility hosted the Sailing World Championships last year,” said Richard Brisius co-owner of The Ocean Race. “

Through the talent of great young sailors like Nicolai and Jena in the last edition of the Race, plus veterans such as Jens Dolmer and Stig Westergaard, Denmark has long played an important role in the Race.”

The Mayor of Aarhus Jacob Bundsgaard said the partnership with The Ocean Race: “demonstrates beyond a shadow of a doubt, Aarhus has achieved an absolutely unique position as a world-class arena for international sailing events”.

“When The Ocean Race docks in Aarhus in 2022, we can look forward to an epic sporting event for maritime Denmark and a fantastic celebration on the waterfront in Aarhus for everyone.”

More stopover ports for the 2021-22 edition of The Ocean Race are expected to be announced in the coming weeks.