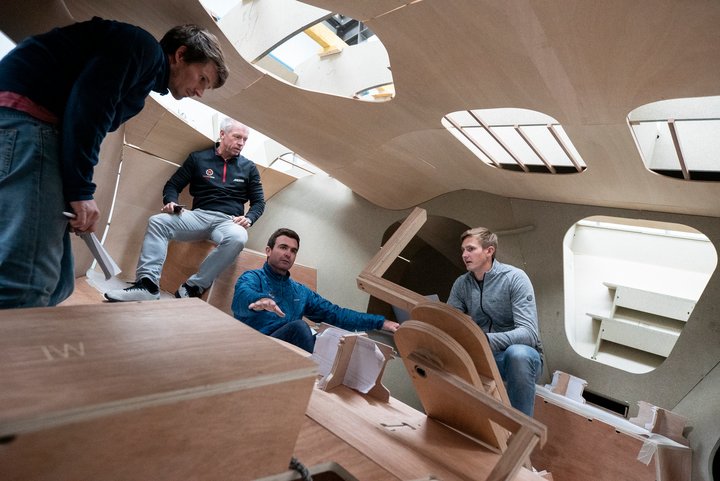 US sailing syndicate 11th Hour Racing Team is one step closer in its ambition to challenge for The Ocean Race 2022-23 with the announcement that the Team is building a brand new IMOCA 60 in Brittany, France.

Skipper, Charlie Enright, and Team CEO, Mark Towill, have brought together three of the most experienced and successful offshore racing expert organisations to conceptualise, design and build the boat.

The new IMOCA 60 is being designed by Guillaume Verdier, one of yacht racing’s most prolific designers with America’s Cup winners, Ultime record-breakers and was involved in the design of four of the last five Vendée Globe winners. Verdier brings together the very best minds in the offshore sailing world to work collaboratively across all areas including structural design to routing, engineering to computational fluid dynamics.

11th Hour Racing Team’s strategic partner for the technical and performance aspects of the new boat build is MerConcept, led by offshore racing veteran François Gabart who won the Vendée Globe in 2012. MerConcept, an Entreprise à Mission [purpose-led company] more recently led the build of Apivia – the latest generation foiling IMOCA, which is a front-runner for the upcoming single-handed round the world race.

A group of nearly a dozen engineers, designers and analysts are working on the analytics and data for the performance analysis of the new design.

The boat is being built by CDK Technologies, based out of Lorient and Port-la-Forêt, France, who have constructed many of the leading offshore sailing boats in the sport, including the last three winners of the Vendée Globe and the largest racing trimaran ever built, the Maxi Banque Populaire V.

“When we learned that The Ocean Race was going to be open to a development class we jumped at the opportunity,” commented skipper, Charlie Enright. “We’ve done two laps of the planet now in the one-design Volvo Ocean 65s and are very excited to take this next step in the Race with a custom design and build process.”

Team CEO Towill agreed, “The challenge that we have in front of us now is taking an IMOCA 60 and turning it into a fully crewed Ocean Race boat and integrating sustainability at every step in the process. It’s something that no-one’s ever done before and that to me is the most exciting part of our campaign.”

The Ocean Race co-owner Johan Salen spoke in July 2018 about his vision for teams to embrace the design challenge. “By opening the next race to the IMOCA 60 and the VO65, we intend to attract the very best sailors, designers and teams in the world to take up the challenge of competing in the pinnacle fully-crewed around the world race. The introduction of the IMOCA 60 brings a design and engineering element to the race that keeps us at the cutting edge of technology and performance and will be appealing to the most competitive performers in our sport.”

The boat is being built to fit The Ocean Race’s unique racecourse with up to 10 stopovers (including two additional equator crossings with a leg to Asia), which includes more upwind and tight-reaching sailing angles. Additionally, it was designed to meet the strict rules incorporating a crew of five (four male, one female) and one Onboard Reporter (OBR), and a heading-only autopilot. The new 11th Hour Racing Team IMOCA 60 will be the first of its kind in the Class.

Enright explained some of the challenges in designing the new 11th Hour Racing Team boat, “IMOCA 60s are typically built for single-handed racing therefore teams are allowed a smart autopilot which uses additional boat data, including wind angle and heel of the boat, to help keep the solo sailors on track. These boats are built with a tiller-system and sailors hand-steer less than 5% of the time, and are reliant on the autopilot for the rest.

“Whereas in The Ocean Race we are restricted to a heading-only autopilot which is not as accurate so it’s more effective to hand-steer our boat 100% of the time. As a result we have had to design our boat with twin steering wheels. A lot of thought and time went into the cockpit and deck design to ensure that our those driving have line-of-sight to the front of the boat and can see the sails, the wind conditions and sea state.

“This is all part of the exciting design challenge that entry into The Ocean Race 2022-23 has brought us. It keeps the Race true to its DNA of sailors helming the boats around the world,” he concluded.

The Team started the new design process in June 2019 and are now at the stage of having a completed hull with the deck structure currently underway at CDK Technologies.

Armand de Jacquelot, Project Engineer at MerConcept commented, “One of the interesting challenges for us was to merge the two cultures: the single-handed French one with The Ocean Race. The 11th Hour Racing Team boat will be the first IMOCA 60 of this generation; that’s an exciting situation but also brings a lot of questions.

“We have spent maybe three times the normal time working on the answer to some of these questions like the cockpit configuration. We built a full-scale mock up in the yard so the Team could come and ‘play’ inside the boat. We’ve changed it three times and pivoted from one concept to another. It’s been quite a tough job to achieve the answers and to find a solution for this cockpit, the livability and the requirement to be driving nearly all the time, but I believe we have done it successfully.”

Over the course of the build, 11th Hour Racing’s sustainability team, including a team member on-site in France, is measuring and evaluating the environmental impact of the entire build process, while also researching alternative materials and techniques including the use of flax in low weight-bearing structures in the boat. This is part of the Team’s overall ambition to leave a positive impact on the environment at the end of the campaign.

The Team’s sustainability learnings, driven by Damian Foxall and Amy Munro, will identify key impact hotspots through life cycle assessment. The team are working with the IMOCA Class to develop and set sustainability standards for future builds and will be publishing and sharing resources with the maritime industry and sailing community to encourage the implementation of sustainability plans.

Sustainability Manager Foxall commented, “From the outset as a Team we decided we wanted to have a neutral impact on the environment, but doing less bad is not good enough. We want to make all our areas of operation and influence net positive and regenerative.”

The boat build announcement is the latest news from the Newport, Rhode Island-based Team, which boosted its crew lineup two weeks ago.

“We recently announced three new crew members, Simon Fisher, Kyle Langford and Rob Greenhalgh, and will be trialing further crew members to join 11th Hour Racing Team. Thankfully we have a very supportive partner in 11th Hour Racing who has allowed us to stick to the original plan and vision, supporting an extra year’s worth of testing, trials, training and racing in the build-up to The Ocean Race 2022-23. It’s going to be an incredible journey,” concluded Towill.