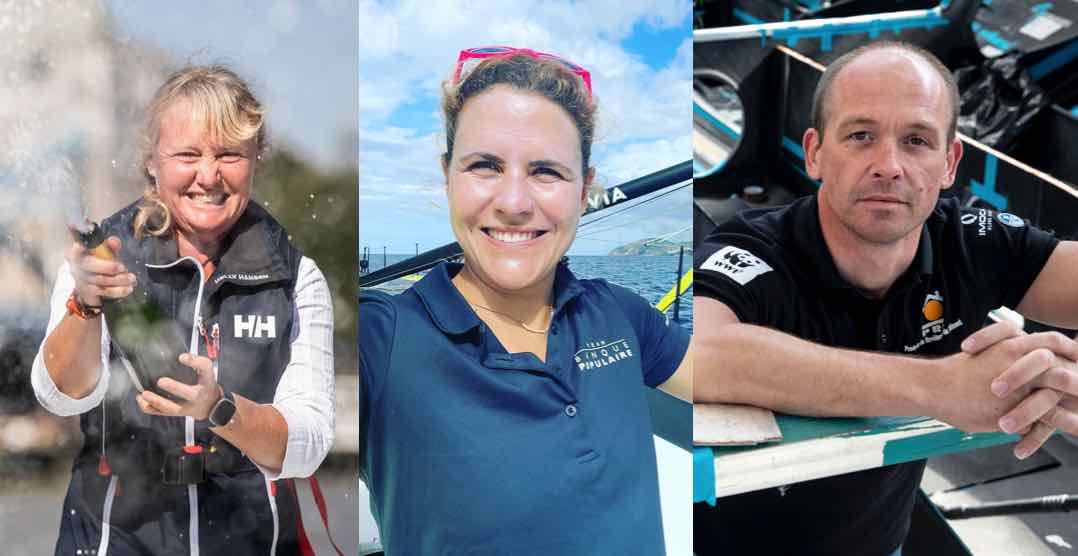 There is nothing like an IMOCA sailor who is stuck on land. Just ask Pip Hare, the British Vendée Globe finisher who did not take part in the Transat Jacques Vabre as she and her team continue preparing their new boat for next season – writes Ed Gorman.

Hare, who finished 19th in the Vendée Globe on debut on Medallia, now has the old Bureau Vallée 2 (formerly Banque Populaire VIII) on her hands and she can’t wait to get back on the racecourse next year.

We asked her what it was like watching the Transat Jacques Vabre from the sidelines and she summed it up in one word, without hesitation: “Horrible,” said the sailor from Poole on the English south coast.

“It’s been interesting for me to be on the other side of it,” she added, “kind of just the whole thing of waking up every morning and the first thing you do is reach for the Tracker and see what’s going on.”

Did she feel detached from what was going on out there on the Atlantic? “I guess so, yeah,” she replied. “For me, especially, you kind of imagine where you would be, where you would be sitting within the story of that race. But it is very much a feeling of being on the outside looking in.”

Her fellow Vendée Globe competitor, the French sailor Clarisse Crémer, who won the hearts of her fellow countrymen and women when becoming the fastest women to sail solo around the planet, is another IMOCA athlete currently “between boats.”

Crémer will be taking possession of the current APIVIA after next year’s Route du Rhum. In the meantime, she will be on the crew delivering the boat back to Lorient from Martinique, where she has been working on behalf of Banque Populaire.

The 31-year-old sailor, originally from Paris, has been looking on the positive side of not being able to take part in the Transat Jacques Vabre – the chance to rest.

“At first it was a bit frustrating to see everybody taking the start of the Transat Jacques Vabre and being left on the dockside,” she said. “But it’s nice to have the opportunity to rest as well because, for sure, we had a big year with the Vendée Globe and The Ocean Race Europe. So I am trying to make the most of it and think about the positive aspects.”

Crémer says that being away from the water and from the intensity of racing has only underlined in her mind her commitment to the sport. “I think what’s nice is to have the opportunity to push the ‘pause’ button and to take a few months and weeks not to be on the highway of sailing, sailing, sailing all the time,” she explained.

“For me it’s natural to say ‘yes’ to every sailing opportunity, but in some way I am now forced to take a rest and it’s a very good thing. Right now I am more sure about my passion for sailing than ever before because not being on the water has reminded me how much I like it.”

While other IMOCA skippers like Boris Herrmann and Maxime Sorel have been taking a break with the likes of Hare and Crémer, Kevin Escoffier has been busy racing the Ultime, Banque Populaire XI, alongside Armel Le Cléac’h in the Transat Jacques Vabre while he awaits delivery of his new PRB-sponsored IMOCA.

Escoffier says he was keeping a close eye on the 60ft monohulls as he and Le Cléac’h raced to third place in the big trimarans.

“For sure I have been following the race for the IMOCAs as well,” he said in Martinique. “Although I was racing an Ultime, I am still interested in the IMOCA fleet and what I saw was that the boats that were launched for the 2020 Vendée Globe are getting better and better, faster and faster. I think each time we say we are getting to the limit of what a monohull can do, we see that these boats are faster and faster upwind, reaching and downwind.”

Escoffier believes that one of the best things an IMOCA skipper can do while awaiting a new boat or a re-fit is to get out and race in another class. “I definitely believe in our sport that we have to sail on different kinds of boats to be able to find the different feelings,” he said.

“We know that we have got more and more technical boats in the IMOCA Class – there is more and more data on board. But to find the last few percentage points of performance, that help you to go faster than the other boats, you need to add feeling to the numbers. Every time you sail on great boats, like the Ultimes or the Ocean Fifties, you discover new things that will help you go faster on your main boat.”

Hare has always been a sailor who likes to get out on the water as much as possible to build her confidence. Being confined to land – or not racing – leads to feelings of doubt and insecurity which she cannot wait to push back on. “

The big thing for me is always that my confidence is grown from time on the water,” she said. “So from that point of view it’s really been a struggle for me not to be doing this race (the Transat Jacques Vabre). I know it was the right thing – not to do it – but you just feel like you’re missing out the miles, you’re missing out the experience and the opportunity to get in there.”

The 47-year-old Briton who went to France for the start of the race at Le Havre, says she kept a beady eye on the sailors in the race who she knows she will be racing against in the next Vendée Globe. One of those is Romain Attanasio who has been getting to grips with his new foiler, Fortinet-Best Western, the former Malizia II.

“I’ve really been watching Romain a lot because he went through a pretty similar rapid transition to his next boat after the Vendée as I have done,” she said.

Hare will be coming out of the blocks with all guns blazing next year, as she seeks to re-establish her presence in the IMOCA fleet on board the former Bureau Vallée 2. After re-launching the boat in March, following a three-month refit and foil upgrade, she will probably head to Portugal for some early season training and afterwards go straight to the start of the Bermudes 1000 race at Douarnenez.

After that she will take on the second edition of the Vendée-Arctique-Les Sables d’Olonne in June, then the fully-crewed Round Britain and Ireland Race, then the Défi Azimut and finally, the small matter of the Route Du Rhum.

“All of that is why I was not rushing to do the Transat Jacques Vabre,” she summarised breathlessly.