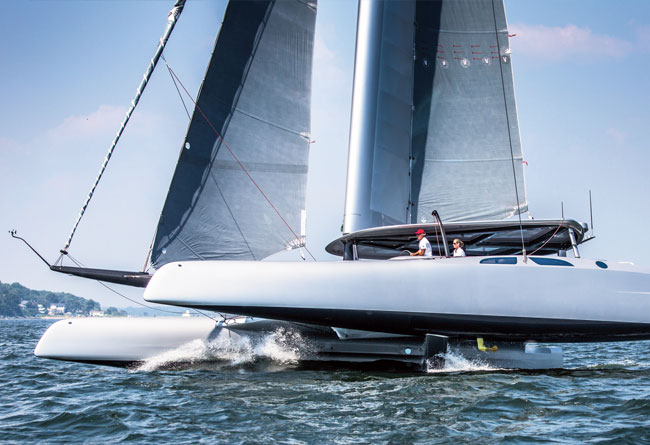 Much-awaited by her enthusiastic following of fans of the smartest high performance sailing ideas, the Eagle 53 is about to get airborne.

Tommy Gonzalez and his team at Fast Forward Composites have gone slowly and carefully with their Eagle Class 53 project, recognising that previous attempts by others to leap towards the promise of foiling large multihulls have had unsuccessful and even dangerous outcomes.

As he says, it took years of efforts at the America’s Cup to apply the focus on research, design and testing to start to get it right at that level, and without those resources then understanding the nuances of control in this design space dictates a more measured and methodical approach strategy to understand foiled flight to get it right.

So it’s exciting to see that after a winter of testing and refinement in the Caribbean and now a summer of testing close to the shop in Bristol, the Eagle Class 53 has made great progress in its quest to be ready for harnessed and controlled flight. Gonzalez and his team have been using a Stilleto 23 cat as a scale model to test ideas before trying them on the Eagle Class 53, and can report progress in the following areas:

Machine learning: to completely understand and be efficient with the control of the T-foil surfaces on the rudders and centre boards, there has to be a process of handling the immense amount of data coming from the control surfaces. The field of machine learning provides guidance on letting a computer learn through the testing process where the ideal settings should be to achieve optimal performance. This is an innovative and clever method to semi-automate the testing process towards the eventual goal of having automated settings for the foiling surfaces based on parameters of wind speed, wind angle, sea state and the desired course steered. Eventually trial and error will not be necessary in sailing/flying an Eagle Class yacht because of this development of autonomous foiling controls.

Sail and wing development: the first 3Di sail produced by North to fit to the back side of the solid wing had a 12 percent chord depth, and the team is now reduced that to only nine percent as the efficiency and speed increases and drag decreases. Tommy and Randy want to see this reduced even further to only 6% to minimize the curvature in the wing, reduce drag, and thereby pointing higher allow even more speed. Testing in St Barths showed upwind speeds of 15-19 knots are possible.

While the foils have been designed to articulate as much as 12°, in testing with C-foils they have been limited to only 4° to allow for better understanding of their effects on performance. Gonzalez says they are perfecting the technique of “skimming” the Eagle with the current C foil configuration. This mode keeps the windward hull just kissing each wave while the leeward hull is lightly skimming the surface for a fast and controllable mode.

Substantial work has been done on the wing bearings. The original design’s outer and inner races of titanium bearings in aluminum saddles proved problematic at tight tolerances due to the differential thermal expansion characteristics of the two metals. With this in mind, the saddles have been redesigned to have an outer race onl

Clysar shrink films have been used on the wings to allow for inspection of the framework structures for any evidence of damage, breakage or cracking, and none have been found. However, it was found that the weather in the Caribbean elevated the temperatures within the wing to very high levels while in the subtropical sun, and the strength of the material in these conditions was only good for four months, so new Oratex fabric is being fitted.

A smaller ball and cup at the base of the wing was devised to spread load over a greater area. This has reduced rotation friction.

‘The winter season taught us a lot,” Gonzalez says. “The 200 miles of sailing in big breeze and waves from St. John to St. Barths and back taught us the boat is structurally sound and can take a beating. Big waves can break over the boat, but exit straight out the back. At times we had 12 to 14 people on board, which is significant weight for this boat, and we noticed only small effects on performance, and none on seaworthiness or safety. With as many as eight on board we could fully skim. Our top speeds in these tests reached 28kts sustained.’