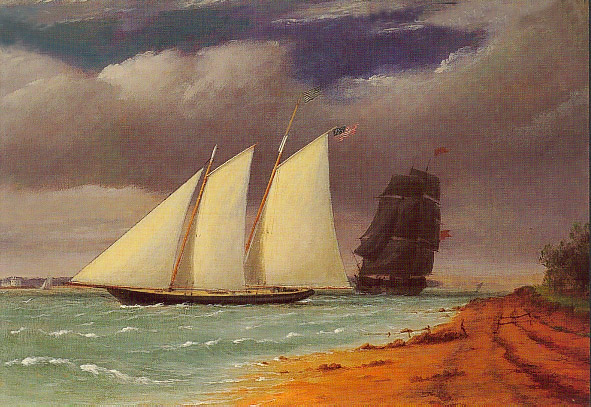 Annemarie Scholte – author of Sparrowhawk on the Horizon, the historical novel based around the original £100 Cup race that ultimately led to the creation of the America’s Cup – sees some similarities between the modern day arbitration cases about three of the current challengers and the goings on back in 1851.

Reading the recent press coverage of the amendment to the Protocol of the 36th America’s Cup, and the acceptance of the validity of the three late entry challenges, reminds me of the very origin of this glorious sporting event; when a newcomer challenges the sailing establishment and faces (multiple) obstacles. In 1851, when the Americans wanted to show the Brits how far they had come in terms of building fast sailing yachts, they ended up having to prove far more than they’d expected.

A small group of New York Yacht Club members decided to come over to England to set the record straight; to show that the young nation was not only capable of making fast steam packets and sailing ships, but that they could produce the fastest sailing yachts as well: seaworthy and race-worthy.

It quickly became apparent it wasn’t the only responsibility resting on their shoulders; shortly before arriving in Cowes with their schooner America, they discovered that they were expected to restore American pride.

The Great Exhibition – the first World Fair – was in full swing in Hyde Park, London, and as it happened, the American contribution to that fair had received bad press. This was regarded as so embarrassing that the American team was warned – by their own countrymen – not to return home, ‘when they would sail to England and not win the race’.[1]

Several English newspapers added to the pressure by suggesting the Americans had come ‘to challenge all the world’.[2]

Having faith in their innovative yacht, they nevertheless continued their journey to Cowes believing that England would give them a fair chance in a race against a ‘selected vessel’ [3] , so that the ‘relative proficiency of the two countries in yachting might be publicly shown’.[4]

With such a race in mind, the Americans spurred the British on by sending a number of challenges to the Royal Yacht Squadron, asking them to pass them on to their members and to any other yacht club in the country. However, not even betting money could tempt the British sailing gentry; no one seemed interested in a race. On the other hand, there was a lot of interest in America as she looked different with taut sails and her bow as sharp as a knife blade and a rumour started (untrue) that she contained a hidden propeller as she was ‘too fast not to have some sort of engine.’[5]

With no official race forthcoming, America unofficially joined races in the Solent and it became clear that ‘Brother Jonathan’s’ novel looking yacht was capable of being victorious and of teaching the ‘rulers of the waves’ a lesson; this only served to increase the unwillingness of the English sailing community to engage.[6]

Arguably, the Brits had good reason to be reluctant to take up the American challenges as they weren’t prepared for the match-race that the latter had in mind. Given that most English yachts were built ‘for comfort and cruising’[7] , or, as one reporter called the boats of the Royal Yacht Squadron: ‘yachts for seasick prone owners who take to yachting for fashion’s sake,’[8] it meant that any race between the vessels was considered as a contest ‘between vessels built for different purposes’.[9]

Meanwhile, the British press were up in arms, with one reporter questioning the courage of the British sailors, comparing them with a ‘flock of woodpigeons rendered almost motionless by fear’ after seeing a sparrowhawk appear on the horizon – the sparrowhawk being America.[10]

Surely, the reporter stated, ‘the whole race of aquatic sportsmen in England won’t discredit themselves by running away or evading a contest’? Adding that in doing so, yachting would lose its ‘credit of being a nursery for bringing up our national naval spirit to a respectable and well-grown maturity’.

The (fictional) reporter in my novel likens such evasive behaviour to an outright defeat, exclaiming frustratingly: ‘if you choose not to fight, consider yourself beaten’.

There are further examples over the ensuing years of challengers who have frustrated the Defender – for example when the Canadians challenged twice in the late 1800’s with what turned out to be ill-prepared yachts, seen then by the NYYC as such a waste of time that they amended the original Deed of Gift to prevent the same happening again. Although it hasn’t always felt that way, the principle of a ‘fair playing field’ seems obvious. And indeed for 2021, the AC75 Class Rule has been developed to ‘regulate all aspects of the boat to ensure fair racing whilst leaving plenty of freedom for innovation’.

Therefore, it’s great to see that the ‘playing field’ for 2021 hasn’t been kept unnecessarily small and a solution has been found through the aforementioned amendment of the Protocol. Allowing the new entrants to participate is not unlike 1851, when the Americans were finally able to race. As none of their challenges were accepted, they eventually gave in and registered America – just before the deadline – for the last Cup-race of the annual RYS regatta, the £100 Cup. This match had been opened especially to ‘clubs of all nations’, not just to members, something not normally done in those days. However, the RYS needed to waive another rule to let the Americans participate: that of their one-owner rule, as America was owned by a syndicate.

In the end, sportsmanship prevailed, underlining the spirit that stood at the birth of not only the Great Exhibition, but also of the race we now know as the America’s Cup: to be ‘a friendly competition’.[11]

Annemarie Scholte is the author of ‘Sparrowhawk on the Horizon’, an historical novel based around the £100 Cup in 1851.