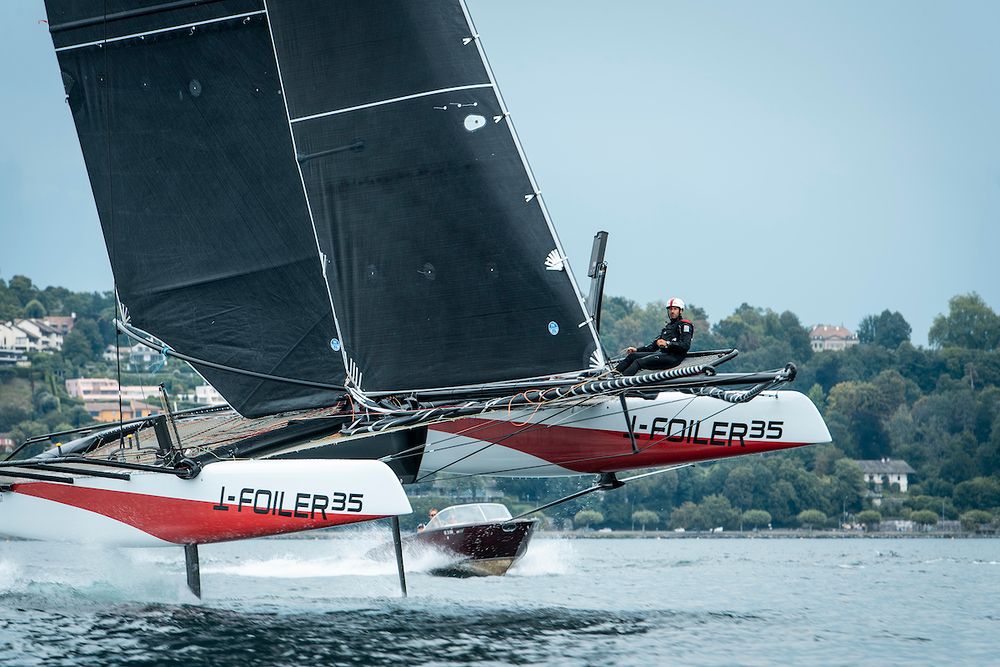 On Tuesday, 20 August, the next generation of high performance foiling catamaran was unveiled as the TF35 splashed on Lake Geneva for its first test sail.

Compared to its predecessors, the TF35 has been designed with the ambitious brief to offer top level foiling to a wider audience of sailors. With earlier take-off speeds, guaranteed foiling upwind and down and a fully automatic flight control system, the TF35 uses the latest in foiling technology, both to improve performance and simplify high speed foiling while making it easier to race.

Having lead the process of development to create the D35, Ernesto Bertarelli is once again one of the committed group of owners involved in the development of the TF35.

Bertarelli explains: “My hope for the new design is that it is not only as successful as the D35, but that it also becomes a competitive class internationally on open waters. The TF35 is one-design, very high performance and, most excitingly, is designed to foil upwind in light conditions.

“I love racing on the lake and the camaraderie of the owners we have involved in the project. Once all the boats are up and running successfully then racing on open water will bring a fresh challenge to the competition,” he adds.

A project 21 months in the making, the innovative TF35’s journey from first concept to first splash was spearheaded by an experienced design team. Gonzalo Redondo and his group at d3 Applied Technologies on the aero/hydrodynamic design and performance, Dirk Kramers (SDK Structures) on the structure design and engineering, Luc Dubois on design and flight control development, Marc Menec (IS&3D Eng) on design and 3D modelling and Adam May on design. With the addition of Jean-Marie Fragnière in charge of the production and build.

“What we have created is super innovative and totally new,” explains Menec. “Our brief was to create a boat that would fly in very light wind, to be driven by an owner driver and to have electronic stability. It has been a really exciting project for us as a design team as we have created this crazy high-spec racing machine but that will be raced by small teams.”

Key to the success of the boat is the one design flight regulation system, which fully automates the height and pitch of the foils, allowing for a smooth and stable flight and the sailors to fully focus on the racing.

Compared to other flying boats which demand the complete concentration of helm and trim, and coordination of the crew, the TF35’s automatic flight control maintains the TF35’s ride height, as boat zero helm Jerome Clerc explained after the first test sail: “Tuesday was amazing. Considering it was the first time the boat has touched the water, it is a real credit to the design team how impressively easy it was to foil so quickly. We have been testing the flight control system and the foil design on a development boat, a small cat, over the last couple of months so this was an early indicator we were on the right track.

“The boat felt very stable and the plan over the coming months is to learn and develop further the flight control systems to ensure we get it just right. In stronger winds we are confident that the boat will feel secure reaching 40 knots.”

TF35 class manager Bertrand Favre adds: “We have been very fortunate to have passionate and committed group of owners supporting the project.

“The last few weeks have been intense with the assembly of boat zero. Our first day of sailing went far beyond our expectation, in only nine knots of breeze we were comfortably foiling reaching 17 knots boat speed upwind and 23 knots downwind with a very stable flight.”

The TF35 will now undertake a period of on water testing before the boat is officially launched in September. From there the eight boats, currently in production, will be completed and launched over the winter period allowing the teams to train ahead of the 2020 season.