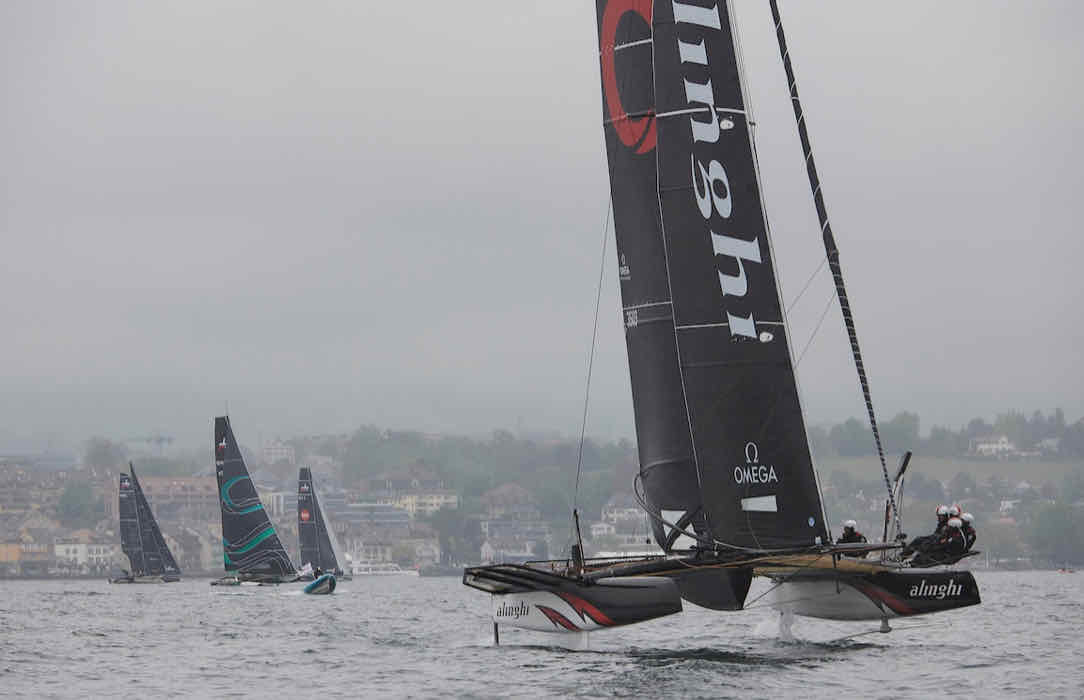 Ernesto Bertarelli’s Alinghi has won the first TF35 Trophy event of 2021 after to little wind forced the cancellation of racing on the third and final day of the regatta.

At the skippers briefing in the morning PRO Benoit Deutsch warned that the day looked difficult as the early sunshine was forecast to give way to storm surges and thunder. If there was going to be racing on the third and final day of the TF35 Opening Grand Prix, the teams needed to be ready to go at a moments notice. The crews stayed ashore; the race committee took to the lake to the south of Nyon to check out the conditions.

They kept abreast of the situation, on the hour updating crews and owners with news as they waited patiently in their team bases ashore. However, when there was still no stable wind at 1500, Deutsch pulled the plug on racing for the day.

“We just didn’t get the conditions today that would have allowed us good racing,” explained Deutsch, “Either there was no wind or it was turning, which made it complicated and unstable”.

The cancellation of the final day hands the inaugural TF35 Trophy event victory to Ernesto Bertarelli’s Alinghi after they won two out of three races on Saturday.

Alinghi’s winning streak was not without challenge. Esteban Garcia’s Realteam Sailing started the regatta well with a comfortable win in race one. Co-Skippered by Jérôme Clerc, they looked set to repeat their performance in race two, leading Alinghi until a shift on the final downwind allowed their swiss rivals to edge ahead. Realteam Sailing finish the regatta in second place overall with a 1-2-2 scoreline.

The remaining podium position belonged to Spindrift, who notched up a trio of thirds in racing to secure the final spot on the overall podium.

Xavier Revil at the helm of Spindrift explains: “In light wind, the difficulty with foiling is finding the right angle to maintain good speed. We worked hard yesterday to make the boat run as well as possible and had three great races.”

Of the rest of the fleet Team Sailfever with Loïck Peyron at the helm was the only team not to suffer a deep result and, in turn, finished fourth in the overall ranking on 13 points. Ylliam XII – Comptoir Immobilier and ZEN Too tied on 17 points take fifth and sixth respectively, followed by Zoulou who ends the regatta on 19 points in seventh.

The teams will be back at the Société Nautique de Nyon over the 14-16 May for the second event of the season. Find out more at tf35.org.