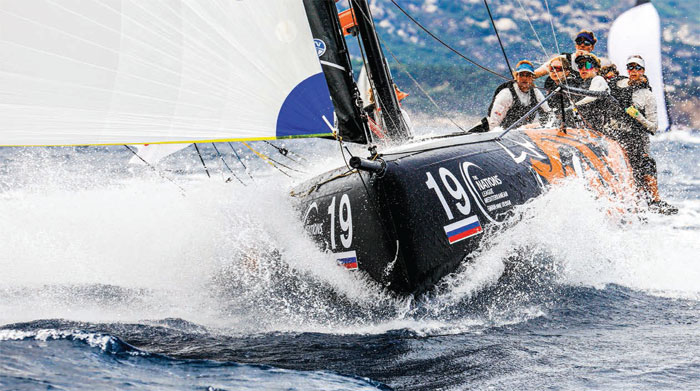 Several ClubSwan regattas have already been run successfully in 2021 and these typically well-organised and great fun – and very competitive – events have also inspired many others elsewhere to get back on the water.

One-design yacht racing has made a welcome return to the Mediterranean and the ClubSwan Nations League is back in full swing, with strong fleets at all this season’s events.

The season kicked off with the Swan Tuscany Challenge on 25-29 May, organised by Yacht Club Isole di Toscana and hosted by Marina di Scarlino, where several next-generation Swan models also made their world début at Nautor’s own private boat show event, Swan Worldwide Previews, which featured the brand new Swan 58 blue water cruiser, the best-seller Swan 48 cruiser-racer, Nautor’s first ever powerboat the Swan Shadow and the MaxiSwan 115 Solleone.

The opening regatta at Scarlino also heralded the launch of ClubSwan Racing as a separate business in its own right, with a clear focus on taking the already successful ClubSwan concept of tightly managed, owner-driver one design racing and rating regattas to a new level. A major expansion of ClubSwan Racing events going forward includes the brand new Swan Asian Regatta held at Riviera Marina in Japan with three days of racing from 29-31 October this year. Regional regatta circuits in the US, the Baltic and the Mediterranean are also planned.

‘Nautor’s Swan invests so much energy in the racing world that it made sense to set up a new division to handle and direct the effort. Racing is part of our DNA and we work very hard with great passion to create opportunities to enjoy the sport of sailing at its best with a very positive and energetic vibe.

Owners will see the benefits immediately, with more stand-alone events for ClubSwan yachts this year, and seamless support offering every service an owner can dream of.’

The new branch is based in La Spezia and headed by Federico Michetti. ‘Our expert team puts good class rules at the heart of ClubSwan Racing to ensure great fun, full service and a great Corinthian spirit that we know our owners love,’ says Michetti, head of sports activities.

Tuscany Challenge
The two fleets of 13 ClubSwan 50s and 10 ClubSwan 36s enjoyed some closely matched and hotly contested racing. The action unfolded in the sheltered waters and steady sea breezes of the Gulf of Follonica, where 11 races on classic windward/leeward courses were staged over four days. The teams included some familiar faces alongside newcomers and represented many of the major yachting nations, with entries from Germany, Russia, Spain, Italy, Norway, the UK and more.

Some of the world’s top sailors joined the fray, including America’s Cup skipper Francesco Bruni as tactician on the ClubSwan 36 Fra Martina and his Luna Rossa teammate Vasco Vascotto on the ClubSwan 50 Bronenosec.

Many of the boats had pro sailors on board including Iker Martinez, Jesper Radich, Bouwe Bekking and Markus Wieser.

‘It’s great to have a lot of boats with the best names of the sailing circuit,’ said Vascotto. ‘There are plenty of Olympic champions and world championship sailors here.’

Among the novelties of this oneof- a-kind circuit, the ClubSwan 36 fleet also has an all-female team aboard Skorpidi that included Olympic sailors Sofia Bekatorou and Natalia Via Dufresne. ‘It’s really important to have an all-female team,’ said Bekatorou.

‘Sailing is a very technical sport, so you can always find ways to work it out differently from the men. I believe in gender equality, and it’s still rare to have women on board because they are smaller and lighter. We feel very welcomed by the other teams here.’

Two general recalls were needed for the ClubSwan 50 class with many boats jumping the gun before the first day of racing got under way in a steady sea breeze. It became clear early on that the advantage was on the north side of the course but that didn’t stop boats from trying their luck to the south and positions were constantly changing. Fierce jousting at the windward mark led to a few altercations for the jury team to resolve on the water.

Giangiacomo Serena di Lapigio’s CS36 G-Spot established an early lead in the ClubSwan 36 class, topping the results table. ‘There is no discard in this event so our first goal was consistency,’ said main trimmer Karlo Hmeljak. ‘We scored three seconds and we had to fight really hard to keep those.”

Leonardo Ferragamo’s Cuordileone surged ahead in the ClubSwan 50 fleet, with two wins and a second place. ‘It was very, very good wind and sea conditions,’ said Ferragamo. ‘The boats are very equal, with a great attitude in the crews. We’ve done a good job so far in training, with the same crew as for many years.’

The second day brought light winds to test the tacticians’ mettle and featured a well-fought duel at the head of the ClubSwan 50 class between Cuordileone and the defending champion, Marcus Brennecke’s Hatari, which had pulled ahead by just one point by the end of the day.

‘They are very fast – the fastest in the fleet in this light breeze,’ said Hatari tactician Markus Wieser of his Italian rivals. ‘It didn’t matter which side of the course you took, both came through. The most important thing was a clear lane and to minimise tacks.’

Consistency was once again the key to victory in the ClubSwan 36 class, with most teams still learning a lot about how to get the best out of the C-foiling boat and a growing consensus that best VMG is achieved at around 25° of heel. The previous day’s winner G-Spot lost out to Andrea Lacorte’s Vitamina, which scored a first, second and third.

‘The racing is getting tougher and more challenging, but the boat has a lot of potential,’ Lacorte said. ‘She’s damn fast. Today the trimmers were fantastic – they didn’t make any mistakes at all. The key is to understand the boat and remain consistent.’

The final day saw a close but convincing win for Ferragamo’s Cuordileone in the ClubSwan 50 class, with arch rival Hatari in second place. ‘They sailed better than we did and deserved to win,’ Brennecke said. ‘It was very tight racing and after lockdown it was just great to be out on the water again.’

There was a knife-edge finish in the ClubSwan 36s with Vitamina claiming victory on the last leg of the final race. ‘We were consistent, with only three wins in the 11 races and I have to commend my crew – I’m very happy with them,’ Lacorte said. ‘We were all very tense before the last race, but fully concentrated on keeping G-Spot close to us.’

Sardinia Challenge
The second ClubSwan one design regatta in this year’s Nations League series was hosted by Yacht Club Costa Smeralda (YCCS) at Porto Cervo, where strong and shifty Mistral winds provided exhilarating sailing and a challenge for the crews’ boat handling skills. The 34-boat fleet was split into four classes, with five Swan 45s and six ClubSwan 42s joining the 13 ClubSwan 50s and 10 ClubSwan 36s that competed in the Tuscany Challenge – plus on additional CS36, chartered for this event by YCCS commodore Michael Illbruck, taking the class total up to 11 boats.

Once again, intense duelling in the ClubSwan 36 class between the two top Italian teams came right down to the final race when Giangiacomo Serena di Lapigio’s G-Spot surged ahead to a convincing win while his rival for the title, Andrea Lacorte in Vitamina, trailed in fourth place, finishing the regatta just one point ahead of Lorenzo Mondo’s third-placed Farstar.

Pedro Vaquer Comas won the ClubSwan 42 class in Nadir after an impressive display of three firsts and three seconds. Second place overall was claimed by Luca Formentini in Koyré – Spirit of Nerina, while Natalia Brailoiu helmed her eponymous Natalia to third.

In the Swan 45 class, Stefano Masi in Ulika saw off a tough challenge from reigning world champion Lennard van Oeveren in Motions. The two traded podium places throughout the event and a wafer-thin two points separated them after the final race. Third place went to 2019 world champion Klaus Diederichs on Fever.

Halfway through the season, the Nations League rankings – which reflect the performance of the top two teams from each of the 13 countries represented in the series – put Italy on top, followed by Germany and Russia. And the season continued, with ClubSwan classes and Nations League points at the Copa Del Rey in Mallorca from 1-8 August and then the grand finale, the Swan One Design Worlds where the biennial Nations Trophy will be won, from 14-17 October in St Tropez.