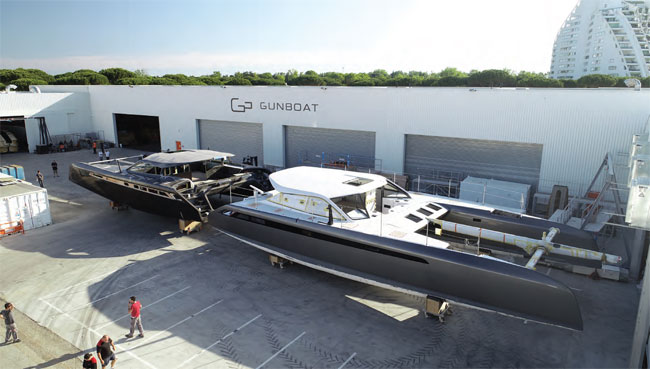 Gunboat’s success in the cruiser/racer multihull world has been driven by many factors, not least a reputation for performance on the water that matches the sleek modern looks that the marque has become so well known for.

The Gunboat 68 is no exception, with the group’s latest, series-built, luxury cruising cat featuring a complex carbon fibre composite construction that presented an opportunity to develop new partnerships with raw material providers.

Gunboat’s target was to identify a supplier that could deliver the entire package of dry carbon fibre reinforcements used for the 68’s hull and deck. The first boat was launched in January 2019 and it was at this time that SF Composites, part of Hexcel’s official distributor network in Europe, started to work with Gunboat and began to optimise the supply chain for the series production of subsequent yachts.

Hexcel is a major producer of composite materials. With a turnover of more than $2.3billion per year they are one of the world’s largest and supply raw materials for a wide range of commercial, military and industrial applications that include automotive and wind energy businesses. And yet despite their size, it is the close relationship with their customers and distributors that lies at the heart of the company’s success.

Main picture: Gunboat’s purpose-built factory at La Grande Motte produces some of the world’s finest catamarans. All carbon fibre used in Gunboat 68 hulls and decks is made by Hexcel and supplied by SF Composites, which keeps an entire boat’s worth of materials in stock at all times to guarantee availability

Achieving better performance by keeping the weight down and the structural integrity up is a familiar strategy that has led to an ever more sophisticated approach by designers and structural engineers. This in turn has required builders to refine their construction techniques, which also has an effect on the raw materials that are used. Often this means increasing the complexity and cost of the build, but through the partnership with Hexcel, Gunboat has been able to refine the construction of the 68 and improve the production process.

Hexcel and SF Composites were able to offer Gunboat several key benefits as a single source of all dry carbon reinforcement fabrics. Not only do the HiMax multiaxials deliver high product quality consistently, they are also optimised for easy resin flow during infusion. All produced in Hexcel’s dedicated carbon fibre multiaxial production unit in the UK, they are also DNV-GL accredited.

Working with the Gunboat design office, Hexcel was able to offer fabrics at the exact weights required and cut to specific widths, increasing efficiency on the shop floor and keeping the overall structural weight to a minimum.

Instead of receiving rolls of carbon and cutting everything themselves, as would normally be the case, SF Composites supplies Gunboat with much of the batch as a set of pre-cut dry carbon rolls. With a multi-year supply contract in place, SF Composites ensures it always has a complete boat set of materials in stock.

‘Today, every piece of carbon that goes into the construction of a 68 has been cut for the task either off site or at times on a cutting table, laid down and quality checked,’ says William Jelbert, chief operating officer at Gunboat.

Based at La Grande Motte in the south of France, Jelbert has considerable experience in the field of composite construction having worked for several major builders around the world where he has been at the leading edge in the adoption and application of modern carbon composite construction.

‘Precision is the key for structural integrity and quality in modern composite construction and one of the reasons why the SF Composites/ Hexcel partnership is so important for us is that it eliminates the risk of human error,’ he says. ‘They deliver millimetre precision that improves build efficiency and reduces labour hours. For example, we order specific rolls of carbon at pre-defined widths of unidirectional fibres for the exact measurements that are required. I get nervous when a tape measure comes out,’ he jokes.

‘But seriously, with this system we can achieve better build tolerances with panels that are cut much more accurately, reducing extra material and weight. The increase in weight is not only the carbon excess but the resin this excess will absorb. So, the material supplied by SF Composites means that we are also achieving an overall weight saving.’

Hexcel’s PrimeTex – a spread tow woven fabric – is used as the first ply into the mould, providing a flatter and more uniform surface finish for the final parts which also reduces finishing time for paint preparation.

‘Due to the highly engineered VPLP structure, we use a lot of different weights and configurations of carbon and yet, in the grand scale of Hexcel’s production, we are a small operation,’ continues Jelbert. ‘There are very few big manufacturers that would be prepared to supply us with materials in such varied specifications and quantities so part of the success of our 68 has relied on the adaptability of our supplier.’

But the benefits are not simply around quantities. ‘The cloths that we have supplied for Gunboat are specifically intended to be infusion-friendly,’ says Hexcel sales engineer Frederic Pomies. ‘They are designed to ease the flow of the resin to avoid the risk of dry spots in the laminate. Broadly speaking, we achieve this through the way in which we make the stitching of the multi-axial fibres. This involves careful adjustment of the gauge and the pattern of that stitching.’

For Gunboat, there were other issues that came into play. ‘Looking at the big picture, we decided on carbon infusion instead of pre-preg because the cost of large ovens and heat resistant moulds was out of step with the weight savings that we might have achieved,’ Jelbert says. ‘Still, we’re obsessed with precision and refining this build in every way, so for us, with the precision of the materials that Hexcel and SF supply, we can achieve a very high standard and weight savings without having to go to the cost and complexity of pre-preg.’

The ability to adapt materials and techniques where required is also important as is the steady evolution of the product and process. ‘We like to use stitched fibres as opposed to woven fabrics because all the fibres are aligned for all but the first layer that goes into the mould,’ Pomies continues. ‘Here we do use woven fabrics. From an aesthetic point of view, it helps avoid print through and allows a better paint finish. Using woven rovings in the outer laminate is also a means of protecting the outer laminate from peeling away in the event of any damage.’

The bottom line is that while the production of modern performance boats can easily focus on the specific materials themselves, for this partnership at least, success is based on the business relationship as well. ‘This is a story about service,’ says Pomies.

‘Communication is very important to us and so is looking to the future and proposing materials that could benefit the construction. For example products such as our DPA multi-axial fibres, which includes an adhesive that helps when it comes to aligning the fabrics, is one area that we are talking to Gunboat about for the future. These materials, which are DNV-GL approved, are easier to place in the mould and it is not necessary to spray the mould with adhesive beforehand, which helps to both save time and avoid emissions.

‘In addition, with materials like our M79 pre-pregs, our XF2 surfacing films, adhesive films, carbon fibres and honeycombs, we can offer the complete solution when it comes to advanced materials. And it is technologies like these that form the basis of conversations with Gunboat as we go forward with the objective of refining and improving the process and of course the final product itself,’ he concludes.