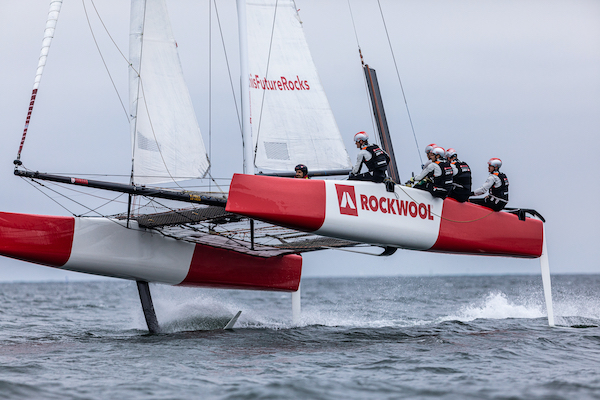 Team ROCKWOOL Racing has announced that it will attempt to beat the current Round Fyn sailing record time in its foiling GC32 catamaran on Friday 4 September.

The official sailing record of 10 hours 7 minutes – which has been held by the Extreme 40 catamaran Angel, skippered by Erik Filsø since 2008 – has stood for over a decade and is one of the Danish sailing’s most famous efforts.

Fyn is Denmark’s third largest island with over 1,000km of coastline, and is located in the central part of the country. It is home to the city of Odense, the birthplace of Hans Christian Andersen and is linked to Sealand in the east by the famous Great Belt Bridge – featuring the world’s fifth longest main-span at 1.6km.

Team ROCKWOOL Racing will depart Nyborg on the east of the island early on Friday morning and sail clockwise in its foiling GC32 catamaran – capable of reaching speeds of up to 40 knots.

“Racing around Fyn has been a staple of Danish sailing for many years, and trying to beat this long-standing record time provides us with a tough challenge as we continue our preparations for SailGP Season 2 in 2021,” explains Team ROCKWOOL Racing’s Nicolai Sehested.

The Round Fyn challenge, which will see Team ROCKWOOL Racing sail around 150 nautical miles, is a feat demanding extreme levels of endurance and focus. Amongst other tests, it will require Sehested and his crew to navigate the iconic Little Belt strait separating Fyn from the Jutland Peninsula. At its narrowest, the straight measures just 800 metres wide.

“The route around Fyn is quite tricky, with tight channels and lots of shallows. We’ve been waiting for a good weather window, as, in the right conditions, our GC32 is fast – but it’s not particularly comfortable and is not designed to be raced for these kinds of miles. It’s going to take a massive effort from the team to beat the current record time.”

Team ROCKWOOL Racing – a collaboration between ROCKWOOL and the Denmark SailGP Team athletes following the rescheduling of the SailGP calendar to next year – has seen the team undertake an intensive programme of activity this summer, including training camps around Denmark, the creation of a unique #ROCKTheBoat youth academy in Copenhagen and Aarhus, plus plans to take on the Round Fyn and Round Sealand records.

“It’s thanks to ROCKWOOL that we’re able to use 2020 to develop as a team, train hard and become even stronger for SailGP next year,” adds Sehested.

“Taking on a challenge like Round Fyn is an important step for us, as racing against the clock means we need to be strategic, very fast and manage pressure, just like in SailGP.”

He adds: “These record breaking challenges also give us an opportunity to raise awareness around some of the important challenges threatening Denmark’s coastline, such as coastal erosion as a consequence of climate change. We’re proud to be working with ROCKWOOL to show that many of the solutions to these challenges already exist, we just need to use them.”

Fyn is an iconic Danish sailing spot and, since 1934, the island has welcomed the Classic Fyn Rundt regatta – a spectacle that has become a central part of the nation’s sailing calendar. Team ROCKWOOL Racing’s Fyn record attempt will be non-official, since it is not ratified or part of an official regatta event.

In May 2020, four foiling kitesurfers – Anders Beckett, Thomas Beckett, Johan Beckett and Emil Beckett Kolko – shaved 1 hour 39 minutes off the Round Fyn record, completing the circumnavigation in 8 hours and 28 minutes in a non-official attempt.

“The foiling kitesurfers did a fantastic job to set such a strong time around the island earlier this year,” adds Sehested. “Foil kitesurfing is obviously very different to racing a big foiling catamaran, but if we have the right weather conditions and sail well, we think we could even challenge their time.”

Following Friday’s non-official record attempt, Team ROCKWOOL Racing will travel to Kiel to take part in the famous Kieler Woche, where it plans to compete in the Welcome Race on Saturday.

The challenge forms part of a busy summer programme for the Denmark SailGP Team athletes, as they prepare to compete in SailGP Season 2, kicking off in San Francisco in April 2021.

To view the tracker and follow Team ROCKWOOL Racing as they take on the Round Fyn challenge on Friday, visit https://www.rockwoolgroup.com/sailgp/rockwool-racing/fyn-record-attempt/