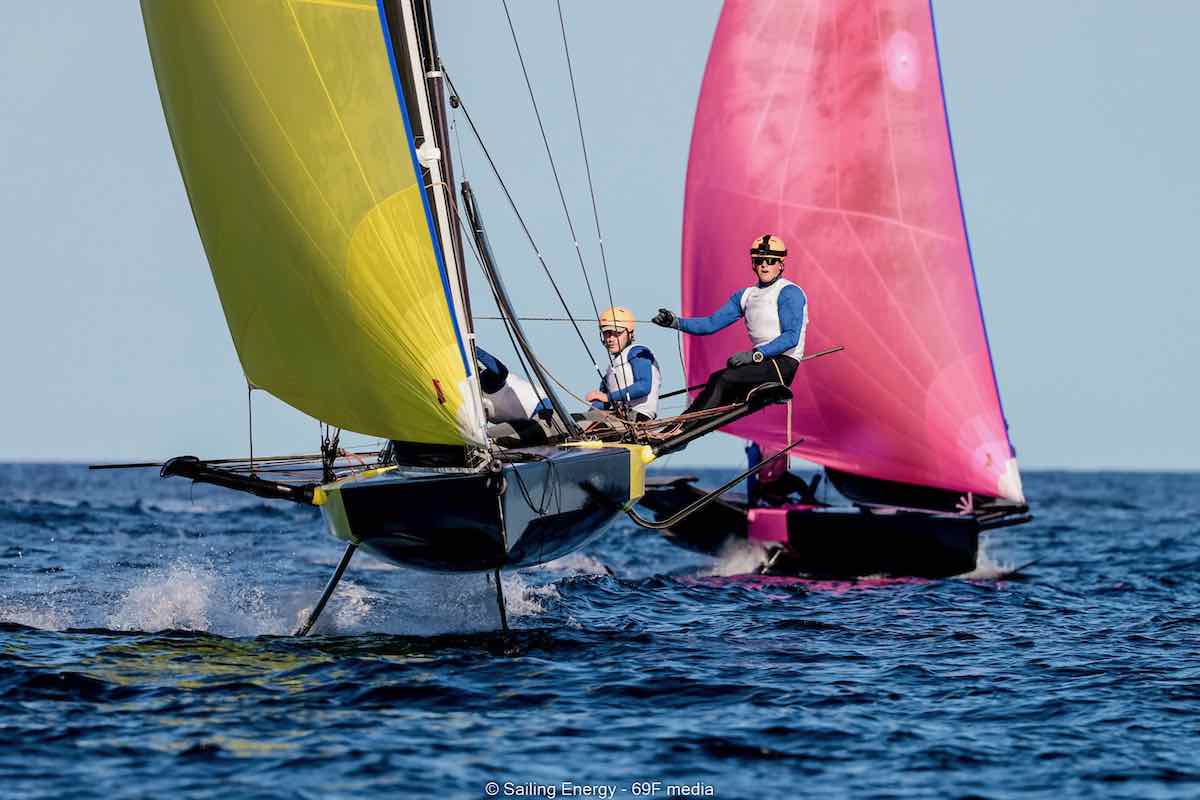 Team Dutchsail – Janssen de Jong pulled off the most impressive win of their 2021 season that has been full of victories from start to finish. They dominated the three Youth Foiling Gold Cup events, ran away from the competition in Puntaldia during the 69F Cup 4.2 and today secured victory over Team Fletcher in the final of the 69F Pro Cup.

The marginal foiling conditions helped the young Dutch team, the most experienced crew on the Persico 69F. While their competitors sometimes struggled to coax their flying machines into the air, the YFGC champions were able to rely on their superior straight-line speed and confident boat handling.

Team Dutchsail – Janssen de Jong triumphed over Tokyo Nacra 17 gold medalist Ruggero Tita and his team in the semi-finals and before facing off against Tokyo 49er gold medalist Dylan Fletcher’s team in the final. In a testament to the challenging conditions, the two teams that made it to the finals were the least experienced in match racing. Despite this, the two teams fought aggressively in the pre-start before the Dutch split from the British 49er specialists, relying on their experience in the Persico 69F to take back to back wins.

However, the day was not all about the young champions. The quarter and semi-finals allowed match racing specialists Checco Bruni, Tamara Echegoyen and Phil Robertson to take the fight to the fleet racers. The crowds on the spectator boats revelled in the close action as teams hunted each other deep into the pre-start box, looking to get a hook or score a penalty.

“Yes, this win is super special,” said Dutchsail crew member Scipio Houtman. “The match racing is completely new for us, as we’ve never done it before. Also, just racing against these guys this week was on another level and something we haven’t experienced before.”

“The year couldn’t have been better,” said his teammate Ismene Usman.  “We put a lot of work in, and it paid off. This event was the cherry on top of an already fantastic year.

“Match racing Dylan (Fletcher) in the final and getting the chance to try some match racing moves that we saw on YouTube – that was really satisfying and then finally crossing the line and realising that we had done it again was super awesome,” commented Cas Van Dongen. “We would like to thank, firstly, our coach, PJ Postma, who made this whole project possible. We’d also like to thank the two yacht clubs behind us and Janssen de Jong, our main sponsor. We also have a lot of other sponsors back home who cheer us on and send us messages. We really feel their support, and it’s a great feeling to share this journey.”

Dylan Fletcher: “Today was the last day of the 69F Pro Cup and it was fantastic to be match racing with some of the best match racers in the world. I really enjoyed my first competitive match racing experience and I think I did OK, so I’m really happy.

“Going into today, we were very happy to be one of the teams that got to do a quarter-final because we needed to get the greatest number of races under our belt as possible. I think I’m quite an aggressive helm at times, and that helps, at least in the 49er. I think the skills transfer quite well and I just had to figure out how to sail these boats. Tamara was very nice in helping me, so I feel like we were a bit lucky.

“It’s been fantastic sailing at the 69F Pro Cup with great weather, great hospitality but most of all, really good racing. I think it’s an exciting format with a lot of races, a short time between races, the shore crew looking after the boats. I’ll be back! ”

Checco Bruni: “We are so happy. It’s been a fantastic international sailing event with important teams, here at Circolo Velico Sferracavallo. We have been lucky with the conditions. This place has given a beautiful wind, days that seemed summery. It couldn’t have gone better. Even the race village was always crowded. I have to thank the sponsors and all those who contributed to the success of this event.

“From a personal point of view I’m sorry to have lost the quarter-finals but Ruggero was very fast and sailed better than us. I think this mixed fleet race and match race formula with the Persico 69F is a very successful test: a format enjoyed by both sailors and spectators.”