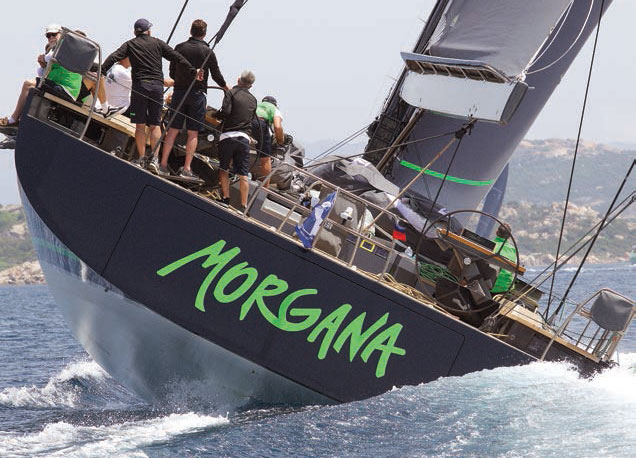 At last we are getting back to near normal post-pandemic with most of the Maxi race fleet returning with full programmes – writes International Maxi Association secretary general Andrew McIrvine.  The IMA team have been very active supporting all the regattas with which we have become involved over the past few years and from which we have created several IMA Maxi Challenge series.

Rather tentatively we introduced a Caribbean Maxi Challenge this year even though we realised that it would be difficult for many teams to commit to getting there. The number of Maxis participating in the RORC/IMA Transatlantic Race in January was encouraging and many stayed on for at least one of the local regattas as well as the RORC Caribbean 600. We have now linked the 600, St Maarten Heineken Regatta, Les Voiles de St Barth and Antigua Week to make up the series. We expect it to flourish.

Palma Vela in Mallorca returned with an encouraging turnout especially from the larger Wallys. The Portofino Regate de Primavera, brought back to life by the Yacht Club Italiano last year, was run again but not helped by rather difficult weather conditions.

The new major event for this season was the first Maxi European Championship, held in the bay of Naples with Sorrento replacing Capri as base for the inshore races. The series comprised an initial offshore race, the popular Tre Golfi (which traverses three bays and the islands of Ponza and Li Galli before finishing in Capri), followed by four days of inshore racing. An excellent entry of 25 Maxis all started together to enable scoring for an overall winner but the classes were also sub-divided based on performance as judged by IRC rating.

Over the years we have used various different methods to subdivide the IMA fleet fairly. Defining sub-classes by hull length and subjective judgements of racer, racer/cruiser, cruiser/racer does not cut it. Recently we have used a formula based on length and rating for performance bands, but saw no real benefit over simple IRC bands so we are now back on that track.

This is intended to remove endless arguments as to whether a boat has cruising capability or not, but this subject will be a bone of contention for as long as we go to sea in ships. The former Maxi72s have all left their original box rule, many having grown longer and/or deeper, but nonetheless they remain a group that have been maximally optimised. Unfortunately as a result no other Maxis wish to race with them.

All rating systems still come to grief racing very different boats together fairly. Within the Maxi fleet we too have this problem, although we have found that IRC for the most part does an extremely good job despite its simplicity. At the Maxi Europeans we started the fleet together but, with rating TCCs ranging from 1.100 to 1.864, course choice was always going to be difficult, races often being too short for the fastest and too long for the slowest.

In the end Terry Hui’s well-campaigned but almost vintage Wally 77 Lyra became the first ever IMA Maxi European Champion… though up until the last race, a tricky lap of Capri with large wind holes, it looked as if Peter Dubens’ NorthStar would take the title.

The next event in our Mediterranean Offshore Challenge was the brilliantly organised 151 Miglia-Trofeo Cetilar race which gets bigger year by year – as do the parties. The pre-race party this year was held in the ancient fortress of Livorno and the event closed with an outdoor seated dinner for 1,500 (sic) at Punta Ala Yacht Club.

This time Furio Benussi’s 100-footer Arca SGR won the double, line honours and overall. Among her crew was Roberto Lacorte, one of the founders of the event whose family company Pharmanutra is its title sponsor. Further excitement after the finish in Punta Ala was the official launching of Lacorte’s spectacular Flying Nikka. This 60ft Mark Mills creation flies on a foiling system similar to the latest Cup boats, but the design also has a conventional bulb keel and is planned to be offshore capable with records in sight.

Right now it is difficult to see if this is the way the world will go but Roberto is to be congratulated on a brave and exciting project that is attracting great interest. (While presenting something of a challenge for the rating offices who have enough trouble coping with planing and non-planing boats, let alone flying ones!)

Following soon afterwards, the 69th Rolex Giraglia was able post-Covid to return to Saint-Tropez for the inshore component, followed by the offshore to Genoa… of course via the Giraglia Rock. The Maxis raced out in the Bay of Pampelonne, undisturbed by the smaller boats and aided by the new electronic marks which open up more course possibilities, as on this shore it is always difficult to anchor conventional marks because the water gets very deep very quickly. Winning on corrected time for the second consecutive year was the Felci 61 Itacentodue skippered by owner Adriano Calvini’s grandson.

Our latest project is to try to develop a framework to encourage high-performance Maxi multihulls to race together more fairly. The fit with the IMA is a good one as most of the former Orma 60s are now privately owned, while among the owners of high-performance cruising catamarans, as exemplified by the Gunboats, there is an increasing desire to race.

We held a meeting at the Yacht Club Costa Smeralda before the Giorgio Armani Superyacht Regatta, where last year the YCCS trialled a multihull class. The meeting was well attended by owners, sailors, designers and builders from Europe and the USA, and demonstrated an enthusiasm to make this initiative work. We followed this with another meeting for more thoroughbred trimarans, mainly the MOD 70s, these having slightly different requirements!

We are keen to establish consensus between the various parties which may end up with a new IMA multihull division if enough common ground is established. It is certainly an interesting development – many past and present Maxi monohull owners are now interested in experiencing a higher-octane side of sailing, offering speed, stability and, in the case of the Maxi cats, considerable comfort.

And as a final sad footnote it is clear that as much as we would like the pandemic to go away it still has not. Boats and people have had to withdraw suddenly from regattas having tested positive. Not confined to crews either, this scribe, his wife and various other members of the IMA team all got a rather different ‘present from Sorrento’. Fortunately all recovered quite rapidly.
Andrew McIrvine, IMA Secretary General