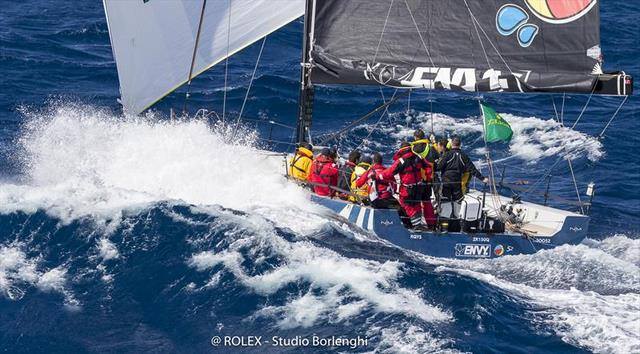 Regular Yacht Racing Life contributor Will Harris send this exclusive report from Sydney, Australia less than a week prior to the start of the Rolex Sydney Hobart Race on December 25 in which he will navigating aboard the TP 52 Envy Scooters.

With five days left until the start of the iconic Rolex Sydney to Hobart race, preparations are in full swing. The weather forecast is becoming more certain and it doesn’t look like it will be a simple ride south.

I’ll be navigating onboard TP52 Envy Scooters. The team competed in the race in 2017 and finished 16th overall, something that we will certainly be looking to improve on. We’ve got an experienced and competitive race crew onboard made up of mostly Australian sailors, some Olympic, including James Paterson and Rafa Trujillo from the Finn class.

I’m the one who sticks out like a sore thumb, having not competed in the race before, being a ‘pom’ and coming from a solo sailing background.

That being said, the dynamics of the team have been working well during training in the last few weeks. Everyone has bedded into their role onboard. With the boat now in Sydney, we’ve all spent some time together on the boat going through the equipment and supplies that we need to take.

Time on the water has mainly been focused on checking the sail wardrobe and working out what setups are best for different conditions. Something that we will need in the final few days of preparation since we are limited by the number of sails we can take. Based on the forecast we will choose which sails to leave on the dock.

This year, the overall weather picture for the race will be dominated by two high pressures to the east of Australia. Once centred 500Nm east of Sydney and the other 300Nm east of Tasmania.

These two high pressures are interacting with each other and creating complicated conditions. If you imagine two wheels spinning in the same direction and they were to touch, they would create friction and slow one another down. It is a similar dynamic with the high pressures, although rather than slowing down the rotation, you are left with a trough of very light wind. This trough is located roughly 200 Nm south of Sydney just before the start of the Bass Straight. The two high pressures to the east of Australia are dominating the winds for the race. The trough extending from the Australian coast offshore can be clearly seen by the lighter wind and big change in wind direction.

The forecast for the start on the 26th Dec is looking confident to have a NNE 15-20 Knot wind. Once we have tacked our way upwind and out of Sydney harbour, we can put the spinnaker up and start heading downwind. By the early hours of 27th we will have our first big tactical call to make. At what point do we cross the trough to get to the new wind on the other side?

The movement of the trough will be critical to this decision. Although forecasts are very accurate, in order to validate the exact position, we will be looking at satellite imagery to identify the trough. Another thing to consider is the East Australian current. A southerly flow of water down the Australian coastline that meanders and eddies back on itself. Weighing up what is more important, better wind or better current is always a tricky one.

Once we have passed through the trough, it will be a building NNE wind, increasing as we go further south. The race will most likely be decided on who makes the right tactical call in crossing the trough. The leaders will pick up the new wind from there and continue to extend. By the time we reach Tasman Island and turn west for the final 30 miles to the finish, the wind will be a solid 30 knots from the north.

Coming into storm bay will be the final opportunity to ‘make it or break it’ before the finish. It is a notorious place for leading boats to lose the Sydney to Hobart. The topography of Tasmania and the bay make the wind very variable and patchy. Making this transition as cleanly as possible will be in the back of our minds from the start. It is looking likely that we will finish the race in 2 and a half days.

I’m excited tick this race off the list. Envy Scooters is a particularly wet boat, much of the running rigging goes below deck, which means plenty of holes for water to go below deck too.