Skip to content
You are here
Home > Recommended > Sydney Hobart 2019: The Wrap and more firestorms 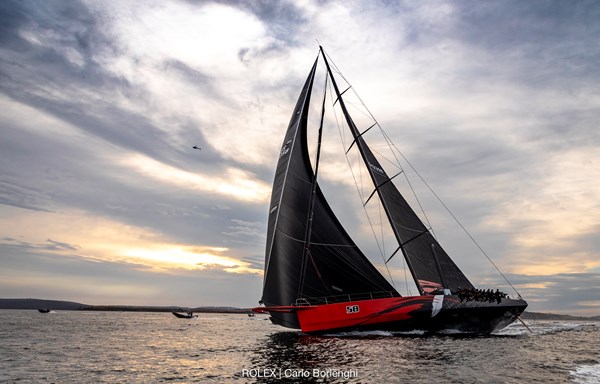 I titled my Yacht Racing.life preview ‘Sydney Hobart -Between the Fires’, and sadly it was.

There was a break in the weather across the east coast of Australia at Christmas and Boxing Day dawned with clear skies and relatively cool conditions.

The race started as it has done for the last 75 years at 1 pm. The largest fleet in the last 25 years, 157 yachts set off from four lines on Sydney Harbour in a building 10-15 knot north to nor-easterly breeze. The breeze was expected to build into the evening before the fleet hit a trough line of light winds.

Five 100 footers were battling for line honours in the 628 nautical miles classic.

The David Witt skippered SHK Scallywag, the former Ragamuffin 100, had a fast start but on port, she had to tack away from the Mark Richard’s skippered Wild Oats XI and fell back.

Peter Harburg’s Black Jack had a reasonable start but in spite of her recent significant speed mods, was slow up the harbour.
Christian Beck’s Info Track (the Juan-K 100-footer launched as Speedboat back in 2008, led the fleet around the clearance mark by almost two minutes, as she had done in 2015 and 2016 as Investec Loyal.

Comanche co-owned by Jim Cooney and Samantha Grant, had decided not to engage with the other four 100 footers on the start line and was fifth out of the heads.

But once the fleet turned south, eased sheets and set their big asymmetrics, Comanche who had taken the gun in both 2015 and 2017 blasted past her rivals. Abeam the southern suburbs of Sydney she was the furthest out to sea and leading ahead from Info Track, SHK Scallywag, Black Jack and then Wild Oats XI.

Stan Honey, Comanche’s navigator, explains ‘This boat has some weak spots, particularly in the light, so to win we needed to be where the wind was, far to the east. ‘

Comanche’s owner, Jim Cooney said: ‘We probably had the second-worst of the transition. We were the widest, a miserable eight hours. For the restart the next day we had to wait longer perhaps than others, but we reused the same plan, and just put as many miles behind us and the other supermaxis.’

Defending line honours yacht, Wild Oats XI, owned by the Oatley family, chasing their 10th win had a horror time, managing to find two parking lots and by the second morning, she was 38 nautical miles back from the leader, amongst the TP52s.

As the morning progressed, Scallywag took a narrow lead, while Comanche was slow to get moving again, suffered even more, with Black Jack climbing into second place, and Info Track close behind her.

Black Jack skipper Mark Bradford: ‘We did not get out of the Heads in good shape and were picking up the pieces from the start. The transition went well for us. Scallywag got through that the best, and then we were next best, but Info Track did the best job, as it is not their space or corner’.

Brad Kellett, Navigator, Info Track’s navigator commented: ‘We stuck to our guns and went downhill at VMG closer to the coast. Not reaching, as this was most suitable for the boat., We saw Oats on AIS hitting the parking lot, we turned thru 90 degrees and avoided it. We waddled our 35 tonnes through the light airs and came out within reach of Black Jack and Scallywag.’

Bradford again: ‘Comanche, was hardly seen for the whole race, once she got going on day two in hard reaching and then running conditions, she was off in the distance. All credit to them, for they did a great job. ‘

SHK Scallywag hit the lead before the dawn of the second day albeit with just a couple of nautical miles as a buffer but then Comanche kickstarted.

Jim Cooney’ On night two across the Bass Strait and down the Tassie coast we had the conditions for what Comanche does best, fast reaching, massively riding moment so that we can carry a lot of sail.’

Jack Macartney from Scallywag ‘On the second night we hit a shark while doing 25 knots, and then broached as it slammed into the leeward rudder. We had to furl up, and then back down hard, as it was folded around the rudder. Thankfully there was no damage to the boat. We did lose 2-4nm out of the exercise, which meant Black Jack got past us, and Wild Oats XI closed in somewhat.’

Skipper David Witt was not pleased: ‘We sailed well, but that shark cost us.’

Comanche was first to Tasman Light followed by Info Track behind them the three narrow 100 footers. The ‘aircraft carrier’ led by around 40 mins at Tasman Light, from Info Track and Black Jack.

Comanche had given a conservative ETA into Hobart but as she approached Iron Pot revised it forward an hour as she was steaming toward the finish.

Just four nautical miles but then came the three lemons 000, as Dame Derwent reminded everyone precisely who it’s the boss.

Info Track announced over the VHF that she was in the river. Looking back, the Comanche after-guard could see her in the distance.

Stan Honey, ‘it was like a bad movie when you say Ooohhh, I know how this ends, but luckily it didn’t, we got some small gusts, and we crossed the line to win.’

Info Track was second across the line. Behind her was the battle for the final podium place.

Peter Harburg’s Monaco entry, Black Jack, had turned at Tasman Light in third place but a broken spreader forced her to limp across Storm Bay, and both Scallywag and then WOXI passed her.

In the final minutes, after following Scallywag past John Garrow Shoal Wild Oats XI headed towards the Hobart shore, while the Hong Kong boat stayed on the opposing gybe.

Wild Oats XI Sailing in more pressure beat her to the finish by 38 seconds to snatch third.

This was the third line honours win for Comanche in the 628-nautical-mile blue water classic.

Overnight it has been reported by a Hobart newspaper that Cooney and his wife who had bought the boat before the 2017 race have sold their 100-footer to Russian interests. However, that, at this stage is just a single unconfirmed report.

Now to the real race, the overall race winner comes from the IRC handicap contenders and in Australia that would most likely be from the 10 boats in the TP52 fleet and so it was.

Early in the race, Matt Allen’s TP52 led from Gweilo and Quest, through the first trough and into the Bass Strait, then the wind came in from the east.

There was a period of some 12 hours when the French entry Frederic Puzin’s Daguet, the former Tony Kirby owned Ker 46 Patrice which finished third overall in 2017, might upset the TP52 party.

As she blast reached across the Bass Strait, Guernsey entry Quentin Stewart’s Maverick 49 with DSS foils was impressive, but as the breeze backed, she slowed.

In the end, to win this primarily downwind race, the speed of a 52 was needed to get across Storm Bay and up the Derwent River in daylight. And that meant Ichi Ban again.

Matt Allen, a member of the Australian Olympic Committee and immediate past president of Australian Sailing, had launched Ichi Ban in late December 2017.

Ichi Ban won the Hobart race that year and nearly did it again in 2018. She was leading the 2018 Sydney Hobart race on handicap until the Derwent River wind softened and she crept to the finish, taking fifth overall.

But in 2019, a new breeze was in by the time the lead TP52 arrived in the river, and she took another impressive overall win.

Matt Allen: ‘Fantastic to win again. In reality its three wins over four decades, the first with Lou Abrahams in 1983.
We’ve spent so much time trying to get a good all-round boat, the 50 footers have been getting faster and faster, and it suits the mid-morning to late afternoon arrival times into Hobart, that is generally strongest. We have a boat that does not have any weaknesses. You might not want to go upwind in 40 knots but there are not boats that are enjoyable in that.’

‘The competition in the 44 to 55 footers alone, it is incredible,’ Allen said. ‘You wouldn’t find the competition we have in this race anywhere else in the world. Gweilo, with the same handicap as us, came back within two miles. Any closer and we would have had to match race them.

‘Quest (2008 winner, then 2015 winner as Balance, and runner-up to Ichi Ban in 2017 by just 10 minutes) was leading the race down the Tasmanian Coast, on handicap. We were ahead of them but not enough we had to beat them over the line by an hour, but they found a parking lot in Storm Bay.’

And the detail from Ichiban navigator Will Oxley: ‘We had two high-pressure systems over Australian waters with multiple trough line elements between the two, and so the challenges were getting thru the first one and then dealing with some light winds, then hard reaching then running down the then getting around Tasman Island.

‘It was also very complicated because the second of the troughs had come through, quite stressful as we could not cover the other TP52’s fast approaching from behind. We could not get across to the breeze in the northern part of Storm Bay, and we had to sail down to the southerly, we could see the white caps, and that worked.’

The final comment from a beaming Matt Allen: ‘After one night’s celebrations, we will start planning for 2020.’

Overall results on line honours and handicap, across all seven divisions, can be found here.

The Postscript
While the tail gunners in the Hobart race were still working their way down the Tasmanian coast, the NSW South coast and the Victorian Gippsland coast, just inside the Hobart rhumbline were being severely burnt. There were large numbers of people sheltering on the beach as firestorms raged through coastal towns and villages.

At Mallacoota on the Victorian coast where Hobart bound boats see the last bit of the mainland, some 4,000 people are trapped on the beach. The Australian Navy has flown n firefighters, food and water and is now evacuating people from that town.

The forecast for this weekend is again 40+ temperatures and northwesterly winds and worse bushfire conditions than last week.

The consequences of climate change are not just in the future. Australia has it now.