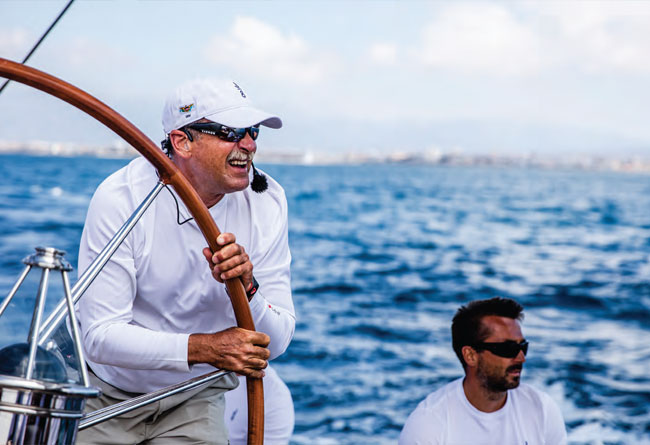 Someone had to take the initiative and it is the Superyacht Cup in Palma that grasped the nettle with the introduction of a new dedicated Performance Class at its next edition in June 2020.

The Superyacht Cup Palma has taken a lead in meeting the evolving nature of the superyacht community with the introduction of a dedicated Performance Class for its 24th edition in 2020. It’s a move that reflects the maturity and responsiveness of Europe’s longest-running superyacht regatta, and looks well set to be warmly welcomed by the increasing number of yachts, owners and crews who occupy the “more speed please” sector of the spectrum.

Organisers of the Mallorca-based superyacht event have of course always sought to meet the needs of the very broad superyacht church – one with a growing congregation to boot – and have done so with some style for almost quarter of a century. Any event that can embrace the likes of the 32m modern classic German Frers designed Bolero, the venerable and iconic J-Class Velsheda, and the Javier Jaudenes designed Baltic-built lightweight flyer Win Win – the last three winners of the Superyacht Cup Palma – as well as the awesome 62m Hoek-designed Athos, is selfevidently delivering the goods.

Not content to rest on its laurels, however well deserved, the new Performance Class will now join the ever-popular Original Superyacht Class and the Corinthian Spirit Superyacht Class – itself introduced in 2017 – at The Superyacht Cup Palma from 17 to 20 June.

‘The Superyacht Cup Palma has got better and better over the past 23 years, and at every edition we listen to the owners, skippers and crews and then look for ways to improve on what we deliver,’ said event director Kate Branagh.

‘It has always been a celebration of sailing in all its diversity, for yachts old and new, traditional and modern, and that vision remains at the heart of the event. The introduction of the Performance Class offers a bespoke category for the new generation of ultra-modern high-performance flyers, along with the excitement and challenge of a fleet start,’ added Branagh, whose Aquamarine Events took ownership of the Superyacht Cup Palma in 2013.

Alongside the conventional racing element of a mass start, and all the pre-start tactics that goes with that, the Performance Class will also race under the RRS on a separate course to the two other classes, all of course with the blessing of the Superyacht Racing Association and the Offshore Racing Congress.

With the Corinthian Class providing a more relaxed alternative for owners who enjoy the superyacht scene but want to avoid the hassle of extensive race preparation, and the extra crew and stress involved in flying super-sized spinnakers, the addition of the Performance Class means Superyacht Cup Palma has broadened its offering and now has something for everyone.

Regular participant Peter Holmberg is one who has welcomed the move: ‘I’ve raced in Palma for many years on all kinds of boats and I know it works because the owners love sailing here, says the US Virgin Islands yachtsman who was at the helm of the J-Class Topaz which took an SYC class win in 2019. ‘You now have a growing number of owners who have gone for fast, lightweight racer-cruisers, so for them to have their own high-performance class is a smart move – and it will also produce some great racing as well’.

The added spice of the Performance Class will enhance the appeal of the Superyacht Cup Palma, which has grown over the years. Beginning life in 1996 as an end of Mediterranean sailing season sail loft get-together for crews waiting to go transatlantic, it quickly acquired a racing component to go alongside the social side – in the early years this took the form of a safety-first pursuit race as owners were not always aboard.

In 2007 – with the America’s Cup being held in Valencia – The Superyacht Cup partnered with the New Zealand Millennium Cup to hold what was then the biggest superyacht regatta ever with 54 yachts gathered. The event was held in June for the first time, where it has remained ever since. Its professional race management was further improved courtesy of RCNP, the Real Club Nautico de Palma, an active collaborator since 2011.

Over the years the Superyacht Cup Palma has attracted a total of over 300 entries, including many yachts and owners who have returned several times. This devoted list of multiple returnees includes names such as Atalante, Ganesha, Highland Breeze, Maria Cattiva, Saudade, Scorpione dei Mare and the current champion Win Win.

Participants and observers have been treated to an incredible display of maritime design, engineering and construction that has celebrated the impressive diversity of yachts that is part and parcel of the Superyacht Cup Palma experience.

In what is a veritable marine industry Who’s Who, the list of designers and shipyards is headed by the likes of Royal Huisman, Vitters, Jongert, Wally, Classen – an SYC Silver Partner, and Baltic – a Gold Partner, on the shipyard side, with Frers, Hoek Design – an SYC Friend – and Dubois taking the podium places for the most frequently represented design houses at this annual festival of sail.

Behind it all, the success of the Superyacht Cup Palma has been built on some solid foundations. First up, the Bay of Palma’s metronomically predictable afternoon sea breeze has always been a major part of the appeal – if not an absolute certainty you wouldn’t bet against it – delivering superb, reliable sailing conditions year in, year out.

Aside from the racing, the event has also earned its enviable reputation by combining the action on the water with a vibrant and exclusive social scene ashore. The custom-built race village sits in the shadow of Palma’s magnificent cathedral, which forms a backdrop to the private, relaxed and informal setting that is the focal point preand post-racing for owners and their families, guests, captains and crews.

Located in the heart of historic Palma, the race village hosts the daily captains’ briefing each morning and allows for networking and informal meetings with sponsors or suppliers during the day, before becoming the venue for evening happy hours, dock parties, live music and of course the prizegiving at the regatta’s conclusion.

It is also an easy walking distance from another one of Superyacht Cup Palma’s big attractions, the incredible range of restaurants and accommodation in Mallorca’s vibrant capital. And a short ride away is a further highlight in the form of the St. Regis Mardavall Mallorca Resort – SYC’s preferred hotel partner – the venue for the annual owners’ dinner which features the very best of Mallorca’s fresh local produce prepared by the hotel’s Michelinstarred chef. Add in the fact that Palma is home to the world’s leading superyachts services including Astilleros de Mallorca, RSB Rigging, Evolution Sails and STP who are all on the SYC sponsor roster as Silver Partners, and the Balearic base makes perfect sense.

Peter Holmberg summed up the Superyacht Cup Palma’s USP neatly when he said: ‘In Europe you can get too little or too much breeze quite often at some venues, so Palma has got the best odds of going sailing and the reliability of the breeze is probably the number one advantage. ‘And then the shoreside is a favourite of pretty much everybody, and it’s all within walking distance of the old town, so it ticks all the boxes.’

He added: ‘The owners are the ones that select Palma, it’s on their list and an event that they want to do. It satisfies the owners’ styles and demands really well, and that’s a credit to Kate and her team.’

Branagh brings the benefit of extensive regatta management experience to every edition of the Superyacht Cup Palma, informed by a sailor’s eye with more than 250,000 sea miles of both racing and cruising.

The introduction of the Performance Class for 2020 is another valuable addition to a wellhoned organisational machine that will continue to strive to deliver a memorable and rewarding experience for all who take part.

The last word from Kate Branagh: ‘Owners, their families, guests, skippers and crews love coming to The Superyacht Cup Palma because it offers a unique mix of great racing on the water and relaxed socialising ashore, and that is something we work hard to maintain and enhance year on year.

‘At the same time we explore where we can further improve the offer, bringing in new elements to extend the event’s appeal to a larger audience in the superyacht world.’

Next year’s 24th edition will once again demonstrate the success of that mission.

Click here for more information on the Superyacht Cup Palma