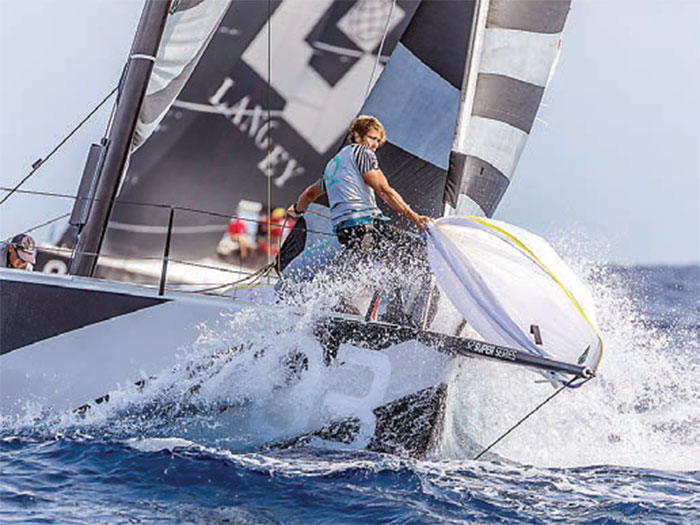 2021 has been an inherently short, compact season and with two regattas sailed and just four points covering the top six teams it looked near certain that whichever team won the TP52 Worlds would win the 2021 circuit overall – writes Andi Robertson.

With 11 races sailed during the season’s first two events, high scores were punitive and, against the usual Super Series trend of ultra-consistency and the avoidance of errors, many of this year’s top boats were sitting with at least one of them, no doubt caused by a lack of regular hard racing.

In the end, after a fiercely fought regatta on the Bay of Palma in Mallorca and by the narrowest of margins it was Takashi Okura’s TP52 Sled team who were crowned Rolex TP52 World Champions and also scooped the 2021’s 52 SuperSeries championship title.

The TP52 20th Anniversary Invitational in Puerto Portals was outstanding, well worth the enforced one-year wait as well as all the effort required and the minor tweaks to the normal 52 Super Series race schedule to have 16 TP52s line up on the same start lines.

The dock crackled with positivity as owners and crews reflected on the longevity of the class. The enthusiasm and passion that all the invited owners showed was a sharp reminder that the 52 Super Series may be the top of the top, but it benefits from being accessible with a pathway for teams aspiring to measure themselves against the class benchmarks, to improve and to have fun and take satisfaction from knowing that they are learning.

All that being said it was sad that for the obvious reason several owners still could not travel to Europe, and they were missed. But massive credit to them for still supporting the event and the circuit by making sure that their boats went ahead and raced without them. On the Invitational side it was appropriate Karl Kwok’sBeau Geste won considering he was one of the very first TP52 owners and that he had done so much to ensure his boat made the party.

The TP52 20th Anniversary Invitational was also the perfect chance for Thailand’s Whitcraft family to put a toe in the water with their newly acquired boat. Originally they had planned to ship their TP52 from Asia but instead bought Team Vision Future which they have renamed Vāyu.

After Puerto Portals they stepped up a level to compete in Menorca with Manu Weiler calling tactics and Francesco Mongelli navigating. It is only travel issues that have prevented them from competing at the Rolex TP52 World Championship but they have already committed to do all five Super Series events in 2022.

The 52 Super Series has, at times, enjoyed the next generation of family members racing with their fathers (and mothers), not least the younger DeVoses and Langleys, but the Whitcrafts are unique in racing with five family members, as well as doing all they can to bring young Thai sailors into their set-up including several of Thailand’s world-renowned Optimist talents.

Co-owners of the programme are brothers Kevin and Tom Whitcraft. Lifetime racers, they grew up racing Enterprises and Fireballs before moving into the Olympic 470 and Flying Dutchman fleets.

‘We fell in love with the sport straight away. We won a couple of medals at the SE Asian Games and things like that. After university when we got back I was coaching and then ran the Thai Optimist programme in my 20s,’ Kevin Whitcraft recalls.

He has also been involved in Thailand’s King’s Cup for 30-odd years and remains president of the organising committee.

Dropping down a size, the pretty Platu 25 was originally conceived as a sportsboat for the Thai market and that is where the family made a return to racing. Later the brothers bought a Botín & Carkeek GP42 and raced that for a few years before buying the TP52 Provezza 7 which they raced in Europe before taking on the Asian regattas.

Now the family crew includes Kevin’s wife Malee and their son Don – who steers – and Tom’s son Dylan. ‘We were happy with how the Menorca regatta went. We enjoyed being in the competition, getting a few good starts – all in all we were happy with how we did as the new kids on the block!’ says Whitcraft.

‘Next year we will do all five events and the aim is to just steadily get better, to slowly try to improve, to get ourselves into contention towards the middle of the fleet, to build our skills, to get better race by race, regatta by regatta.’ Whitcraft freely admits that it was the idea of the TP52 Invitational that was the magnet that drew them to Europe as longtime fans of the circuit.

‘And we enjoy the travel. Our business is global and travel is part of it; we just like going to new places, sailing there and learning and enjoying the culture.’

As travel opens up the Whitcrafts will integrate more Thai sailors into the crew wherever possible, but Kevin notes, ‘It is not exclusively Thai sailors we want to help, we are always looking to help young sailors. Thailand has done so well in the Optimists and many of the sailors are now stepping up to larger dinghies, but in the past going beyond that has never really been possible. So we would like to let some of them see what the real world is like at this level!’

Meanwhile, the TP52 fleet itself has never been closer, borne out by the huge volume of data now being analysed by the coaches, not least Quantum Racing’s James Lyne, who like others on this four-times championship-winning campaign returns to the circuit with fresh eyes after two years with American Magic.

‘Everybody is tighter, the quality of the teams has gone up and when you look across the fleet, where there used to be a disparate range of sail shapes and mast bends, everybody is now very, very close,’ says Lyne. ‘Some boats have points where they are faster. Some teams have improved their boats to fill a previous performance gap, others have done a really nice job internally as a team.

‘The use of the latest active sail-scanning technology is now the norm right across the fleet… plus everyone is now using it more effectively. The knowledge that maybe only a few teams had four years ago, now they all have it!’

Lyne runs all the debriefs for Quantum as well as for their tuning partner Platoon, interpreting data not just from their two boats but looking at shapes, set-ups and techniques throughout the fleet. The three years spent at American Magic have also paid big dividends. ‘We have more refined analytical tools now for looking at the racing, more statistics in terms of, for example, how long did we stay on a shift, a metric of how we sailed relative to the fleet.

‘On the Sail Nord [software] side we are adding in some really nice statistics from the trackers, we can see the relative performances now at resolutions undreamt of even four years ago.

‘So the advances now are tiny. It’s all about, are you a boat that has no weaknesses so you can score in all conditions, somewhere around 3.5-4pt a race, that you need to win the circuit? And how do you ensure that level of consistency? That is what it is all about. So all the time you are refining, refining, all the way through the season.

‘And this year it’s been a stark reminder of how tough that sort of consistency is to find; the lack of sailing has hit us hard – even at this pretty high level!’