Skip to content
You are here
Home > LATEST > Step by step 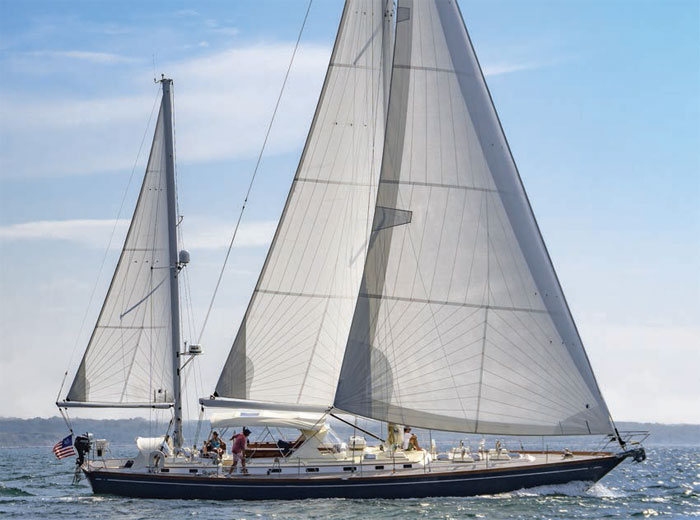 We like to assume that sailing is inherently sustainable, powered by renewable energy. Sails themselves, however, are the elephant in the room when it comes to sustainability. It takes a lot of energy to make sailcloth and the raw materials required to achieve the extreme levels of stretch resistance, strength and durability that we rely on for efficient sailing are inherently unsustainable. Or rather, they were. Last November Dimension- Polyant’s Hydra Net radial was the first sailcloth on the market to become 100 per cent climate neutral. And the even better news for sailors and sailmakers is that there’s no change at all in its performance.

So what has changed? First, Dimension-Polyant has worked hard over many years to get its own house in order and those efforts have come to fruition. Both of its factories, at Kempen in Germany and Putnam in Connecticut, USA were certified as climate neutral production plants in 2021. That isn’t just greenwash. Their carbon footprint calculation is all-inclusive, not just based on energy, water and waste. Things like business travel and staff commuting are also factored in, and unavoidable emissions are offset by certificates from recognised climate projects such as Plastic Free Oceans. The fact that it’s certified by a reputable independent assessor, Climate Partner, is also significant.

The second big change is that a bio-based version of Dyneema yarn, one of the key raw materials in Hydra Net radial, has become available. ‘Ever since I joined the company 13 years ago we’ve been looking for better, more environmentally friendly materials,’ says Dimension-Polyant’s UK head of sales, Ben Rogers. ‘Unfortunately, until recently while there have been alternative materials, the technical specification hasn’t been good enough to use in our sailcloth. That’s the wall we’ve been hitting but it’s changing very fast. Now we’re able to say that we’ve tried really hard and we’ve actually got somewhere, this is officially climate neutral.’

How can we be sure that the performance of the new, climateneutral Hydra Net radial really is exactly the same as the trusted original? Because the two versions are physically identical and made in the same process. It starts with naphtha, the raw ingredient used to make ethylene, which is the first step in the production chain for all ultrahigh molecular weight polyethylene (UHMWPE) fibres such as Dyneema.

Instead of running two separate manufacturing processes in parallel DSM, the maker of Dyneema, uses a blend of bio-based naphtha (recovered from the wood pulp industry) and fossil fuel-based naphtha to make ethylene. They haven’t stopped using fossil fuel-based naphtha simply because they can’t source enough biobased naphtha to replace it. They then use a mass-balancing approach to divide their production into two parts, which are sold as bio-based Dyneema and regular Dyneema, based on the proportions of bio-naphtha and fossilfuel naphtha that went into the blend at the beginning. So whichever version of Dyneema you choose, bio or nonbio, its technical specifications can’t be anything but identical.

What about the other materials that go into Hydra Net radial? ‘The next challenge is to replace the polyester fibres with recycled or biobased alternatives,’ Rogers says. ‘How far off that is, we’re unsure at the moment, but we’re working on it.’

Dimension-Polyant is also focusing some R&D resources on end-of-life recycling solutions. ‘It’s difficult for sailcloth because you have to separate the components,’ Rogers explains. ‘You could recycle the films but you have to get the adhesives off and separate the yarns. In the UK I’ve spoken to lots of recycling people. They all said yes, bring your samples, we can do it. Every single one came back and said no. So there’s a lot to learn.’ Dimension-Polyant is also working with a German university on upcycling solutions for sailcloth that don’t involve taking it apart.

So has the price of Hydra Net radial increased as a result? Yes and no. Dimension-Polyant’s costs have gone up, but at the moment they haven’t passed those costs on to their customers.