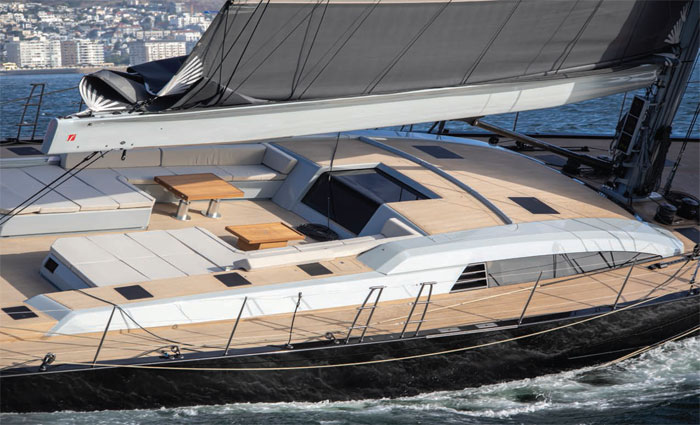 Perfectly matching rig, rigging and superyacht at the first attempt takes on new meaning when the key suppliers can be many thousands of miles apart from each other

A close working relationship between a builder and suppliers is important whatever the size of vessel, and the rapport between a mastmaker and boatbuilder is a crucial one where millimetres can define the difference between success and stress.

In our super-connected world, the geographical challenge for two such operations might be considered to be one of pure logistics, but when it is Hall Spars and Southern Wind Shipyard, the distance between the two facilities means that getting things right first time aboard a yacht that will be over the horizon in days is not just desirable, but crucial.

Southern Wind’s fifth SW105, Sørvind exemplifies this. Like many that emerge from the Cape Town facility, her first passage was to the Mediterranean.

‘While we treat all our clients with the same detailed level of attention and support throughout the entire process, with Southern Wind we are always very conscious that the first voyage for many of their yachts will be a 7,500nm passage from South Africa to Europe. For any new 100-footer that’s a big ask which focusses minds on all sides,’ says Hall Spars’ project manager Alex Runciman.

‘Very few boatyards faced with such a big maiden passage would be prepared to say yes to a trip like this after just a couple of test sails. But for us, this is the reality and it sets the bar high from the start. But it also says much about two of the key characteristics of a Hall Spars rig, namely precision and reliability.

‘The physical distance between Hall Spars in the Netherlands and Southern Wind in Cape Town make both absolutely essential. The rig has to fit perfectly first time and it has to be totally reliable.’

But it’s not as simple as that. The complete rig with its carbon spars and composite standing rigging still needs to deliver the weight savings and low centre of gravity that make a modern composite rig the go-to for performance yachts.

Here, Hall Spars’ considerable experience in spar-building, along with its position within the North Technology Group, which also includes Future Fibres, places it among the most advanced companies in the marine world. And while on the face of it carbon spars may look the same, under the skin Hall Spars are distinctly different.

‘Our spars are built on an aluminium male mandrel using our seamless technology,’ Runciman continues. ‘This means that unlike other manufacturers we do not have a join along the front or the sides of a mast tube that has been built in two halves in female moulds.

Instead, we create the tube by wrapping the laminates around a male mandrel in a range of different orientations from those on the zero axis, which are in line with the mast and run from the bottom to the top, to 45s which run orthogonally across the tube and then 90s, which run transversely or in hoop direction. From there, we add patch laminates onto the tube to create the strain relief around key stress points on the spar such as the spreader and shroud attachment areas.’

This seamless tube is also a very efficient and cost-effective way of building a high-quality spar and this, in turn, contributes to another important Hall Spars characteristic. A further example of combining best practice with an efficient build can be seen in the way the laminate is cured.

‘All our spars are created in a single cook,’ says Runciman. ‘We do not do stage cook which means we don’t do a partial or pre-heat as you might in the construction of a hull where the process may start with a 70-degree warm session before then going to 80 degrees with the final cook at 110.

‘One of the issues with this multi-stage method is that you have to make sure that the first cook is bonded to the second. Our single cook system ensures that we have a fully consolidated laminate which is another of the factors that helps us to create reliable spars efficiently.’

And the benefits of building on a male mandrel don’t stop there. The seamless technique means that there is little, if any, need for fillers and fairing which further reduces the construction time and the overall weight of the spar.

‘We can save 30 to 40 kilograms of fairing on an SW105 rig by using our semi-faired system,’ he continues. ‘Imagine a patch area that comprises multiple layers of reinforcement. One layer that’s say one millimetre, then another larger one underneath, and so on, which would create a series of stepped plateaus. Our semi-faired system bridges those small plateaus to achieve the look of a fully faired rig, yet in reality just these specific areas have been faired.’

The benefits of a Hall Spars rig are not solely down to their proven and efficient construction techniques. Anticipating the future use of the yacht and catering for a spar that can also be adaptable is important to Runciman and his team.

‘We take pride in being able to anticipate and cater for the different ways in which a yacht may be operated,’ he says. ‘Sometimes this will be driven by a change of ownership and hence change from say occasional racing to full-time blue water cruising.

One example might be a slight change of use that requires a halyard lock. This would require some patching to cater for the additional loads. It’s easy to include this in the original build and might allow a lock to be fitted without unstepping the mast. To put additional patching in afterwards is a bigger and more costly exercise.

‘The backstay configuration is another example for masts that have a dual role where they can be configured either with topmast runners with a deflector system for racing, or a classic fixed backstay with continuous legs alongside fixed checkstays for cruising.

To achieve this the checkstays, which are normally fixed, are removed and replaced by deflectors that are pulled via the existing checkstay tangs and actuated by means of a hydraulic cylinder at the bottom of the mast. When we want to put the runners on, we take the checks away and change the tangs out to allow the dog bone system at the top of the running backstay to form the attachment.

This can all be done with the mast in situ and takes a few hours rather than having to take the rig out. As a result, it means that the boat can be more versatile, allowing the owner or skipper to combine a season of extensive cruising with some occasional racing without having to compromise in any way.

‘We’re also very excited about being able to integrate a Synapse load-cell system into our rig packages, which has already proven to be a very appealing and reliable system for monitoring rig loads.’

Elsewhere, there are other examples of versatility being designed into Hall masts with the inclusion of pods that cover up the radar bracket holes and the satcom dome mount when they are removed for racing. As well as cleaning up the aerodynamics of the mast they also provide low profile stowage for the coiled-up cables.

When it comes to standing rigging, Sørvind has Future Fibres ECsix multi-strand carbon rigging, comprising bundles of continuous strands of carbon fibre running from their attachment point, be it a cap shroud or a diagonal, down to the deck.

As well as weight saving and efficiency, aesthetics are also important. Here, the cap shrouds are fitted internally whereas the upper end of each diagonal passes through the relevant spreader root to a semiinternal fitting above the spreader. This not only ensures a clean look from below, but makes maintenance easier as the attachment points are easily accessible.

Talking of detail, the mast partners, where the keel-stepped tube passes through the deck, provide a further example of how looks and efficiency have been combined. The Magic Collar is a rectangular section that is integral to the mast and fits neatly into the deck partners with shims attached either side as required for a perfect fit and alignment. Once in place, a skirt fairing is attached to provide the finishing touch to the deck seal around the mast and a sleek, clean look.

The slab reefing boom on Sørvind is also a carbon structure incorporating a deep section onto which carbon wings are attached.

‘Unlike the masts, we do build them in a female mould because these sections are much deeper,’ Runciman says. ‘When it comes to the slab reefing mainsail stowage there are two options, either racks or wings. Sørvind has wings which are foam cored and carbon sheathed.

‘As with our masts we pride ourselves on the detailing, especially in areas where the versatility of the spar is discreetly integrated into the overall design. The integral bolt rope tracks for the bimini in the lower corners of the boom as well as those for the mainsail cover, which are on the top of the wings, are two good examples.’

Another major factor in Southern Wind choosing Hall Spars and Future Fibres for these projects is their unique capacity to service their customers with RigPro anywhere the yacht sails. RigPro is the only authorised service provider for these sophisticated products and offer a total care above deck package. Its RigPro Care maintenance programme puts owners and captains minds at rest knowing that the servicing and maintenance of the rig and rigging package is all taken care of within the same group of companies.

So, while it is clear that creating a sophisticated mast must never compromise its performance or that of the boat, reliability is especially important for a company that regularly sends its brand-new boats off on a 7,500nm maiden sail.

To do that requires a special relationship and trust with a company at the other end of the world.