Skip to content
You are here
Home > Advertorial > Standing it up …. and keeping it there 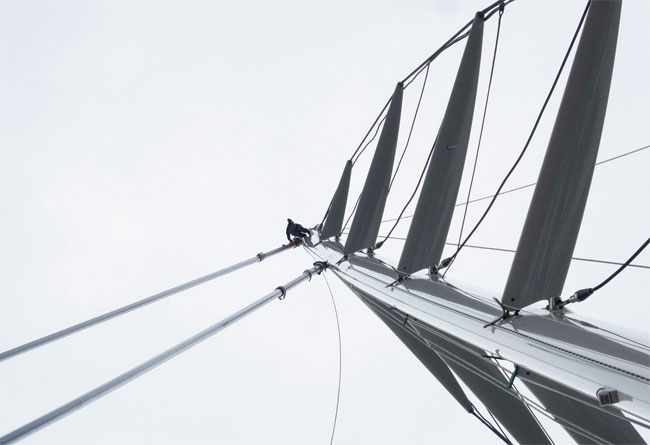 It is perverse that one of the most critical areas of every sailing boat was also one of the last areas where appropriate attention was given to formalising maintenance schedules.

From modest daysailiers and round-the- cans racers to the most sophisticated of superyachts, anyone who owns a yacht of any size – or manages one on behalf of someone else – will tell you the thing they value most is the peace of mind that their boat is safe and in good overall working order. That is where RigPro comes into the picture, with its worldwide RigPro Care programme.

While most people can organise maintenance programmes for the hull, engine, deck hardware, and all the other myriad ancillary items dotted around today’s yachts, the mast and rigging require professional help from people with highly specific knowledge and expertise.

RigPro is the only authorised service provider for Southern Spars, Hall Spars and Future Fibres, as well as the other North Technology Group owned brands now no longer in production: Omohundro, Marten Spars and Nordic Masts.

As well as having five expertly staffed service locations located in key yachting hotspots across the world, the secret sauce that makes the RigPro Care service programme so unique is the company’s global database containing comprehensive records of the service work carried out on over a thousand client yachts.

‘Who better to look after the ongoing health of your mast than the people who built it in the first place?’ says Stefano Scarpa, director of service at RigPro. ‘With centralised records containing information of the yachts whose mast and rigging have been inspected and/or serviced by us – as well as the original specifications to which the mast was built as new.’

That unique data source, Scarpa says, is what makes RigPro so compelling to owners and captains, especially since the company has recently invested in improvements to the database’s functionality.

This upgrade project – migrating RigPro’s five databases to create a single global service log database platform – delivered major improvements to how efficiently the RigPro client service managers can interrogate the database. ‘The result of all that work is that we can now switch into a much more proactive mode with our clients,’ Scarpa says.

‘We know that private boat owners and yacht captains lead busy lives, so we want to be able to give them peace of mind by taking away the worry of having to remember when their boat’s mast and rigging needs to be serviced. Now the database enables our client service people to contact them with suggestions on what the most suitable service programme might be for their specific needs.’

RigPro Care is based around a service cycle that recommends a visual inspection six months after commissioning, followed by an annual visual inspection, with a full service taking place every five years.

‘That is our base recommended service level,’ says Hamish Miller, RigPro project manager and senior rigger. ‘But by getting closer to our clients we can understand their individual requirements and tailor a service package to suit. That might include an interim service just before or after a major ocean crossing, a prolonged period of cruising, or a major race or regatta. Everything we learn about a yacht’s activity goes into the database for future reference.’

All the RigPro service centres – Palma, Mallorca and Valencia in the Med, Portsmouth, Rhode Island in the United States, Breskens in the Netherlands, and Auckland in New Zealand – have fully trained mobile teams that can visit a client’s boat to carry out inspections and service. A visual inspection involves a great deal more than a person with a clipboard casting a casual eye over the mast and the rigging. Typically the mast’s hydraulics are jacked down and tested, and all accessible mast fittings (internal locks, sheaves and so on, spreaders, standing and running rigging) are fully checked over and lubricated.

On completion, the mast is jacked back to its correct hydraulic pressure (as per the records – and then tuned on the dock to ensure it is standing central in the boat. Finally the RigPro Care log is updated and the owner or captain is provided with a survey report and a list of any suggested follow up actions.

Existing clients have been automatically enrolled in the new RigPro Care programme, which Miller says is an evolution rather than a revolution in the way the company services its clients.

‘We are being smarter with the information we have available to us,’ he says. ‘The result is that we can offer our clients better clarity on the service requirements of their yachts and more peace of mind that their masts and rigging are in optimum condition for whatever activity they have planned.’