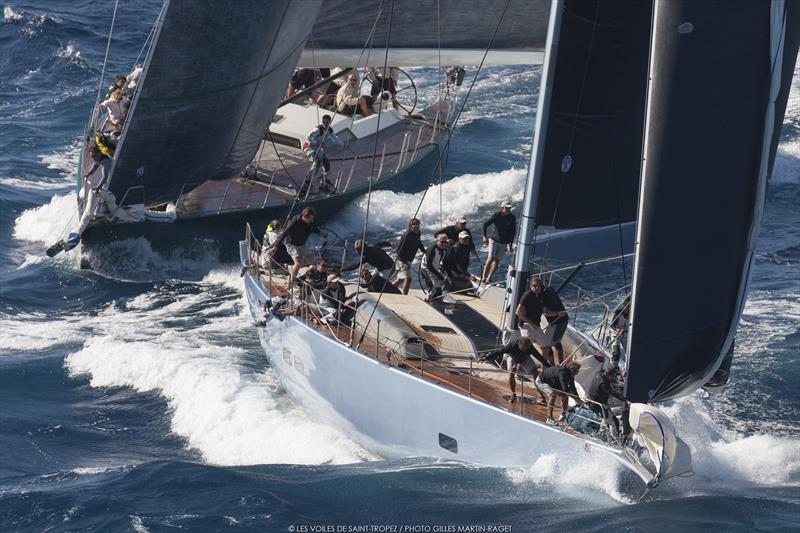 With 45-plus boats competing, ranging in size 18 to 42 metres (59 to 138 feet), the second week of Maxi Yacht racing at the Les Voiles de Saint-Tropez regatta this October promises to be a truly spectacular affair.

Among the giants are the prestigious Wally yachts. Extraordinary in their conception and loyal partners to Les Voiles, this group of yachts are world leaders in innovation, characterised by their exceptional designs, advanced technology, superior performance, as well as luxury.

Meanwhile, the offshore maxi Leopard III (winner of the IR1 class last year), and Rambler 88, Ambersail 2 (VO65), and Hypr (VOR 70) – all three returning from the Rolex Fastnet Race, will be looking to make their mark.

A notable first-time participant in Saint-Tropez, is the gigantic VPLP-Verdier 100-foot Maxi Comanche, led by legendary Dutch yachtsman Mitch Booth. With a towering 47-metre (154-feet) high mast, and 1100 square metres/12,000 square feet of downwind sail area (equivalent area of three Wimbledon tennis courts), she should be easy to spot out on the racecourse.

The match-up between the two J-Class Velsheda and Topazgreen promises to be a colourful duel, certainly in breezy conditions. At 175 tonnes of displacement, they are each almost six times heavier than Comanche.

Among the deceptively named ‘pocket maxis’, two regular Voiles competitors stand out: Jethou and Vesper. This year these two will come up against North Star, another 72-footer running under a British flag, as well as two new boats to the Voiles, both launched at the beginning of summer.

Black Legend 6, is a 22-metre (72-feet) French conception created by the young and talented naval architect Sam Manuard, and put in the water in June 2021 at Black Pepper Yachts in Nante.

Then there is the Baltic 68 ‘Café Racer’ Pink Gin Verde, an inverted-bowed day boat designed by the Spanish Javier Jaudenes and produced with particular attention to its environmental footprint. With a hull comprising 50 per cent natural fibre, it is equipped with two electric motors and a hydro-generator system which enables it to generate its own power under sail.

Also racing will be the much-anticipated Southern Wind Reichel-Pugh/Nauta designed Morgana, which was built in South Africa and attending Saint-Tropez in its debut race season.

Finally, Maxi Class enthusiasts will be delighted that Silvertip – designed by Ed Dubois and which dominated the Maxi Yacht Cup organised in Auckland during the last America’s Cup – will also be racing at Les Voiles de Saint-Tropez 2021 pitting themselves against their northern hemisphere counterparts for the first time.