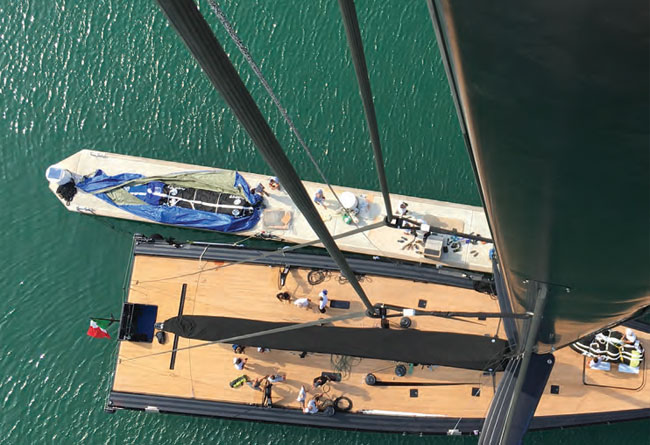 The yachts may be (very) big, (very) fast and (very) beautiful, but the WallyCento fleet is every bit as obsessed with sailing balance as any other smaller racing class. So if that means moving the rig at sea to maintain optimum rudder angle? No problem!

While WallyCento owners have used different talents to design and build their yachts, they all turn to Southern Spars/Future Fibres for masts and rigging. With a race-winning pedigree at Grand Prix level and awardwinning expertise in superyacht rigs, the company is perfectly equipped for the Wallycento blend of performance and luxury cruising.

Back in the early 1990s, when Luca Bassani burst onto the superyacht scene, he brought innovations that defined a bold and uncompromising new aesthetic, which shifted the entire industry and continues to influence its direction.

Given his own background in competitive sailing, Bassani would never be content with good looks alone. With European and World titles in Six Metre and Mumm 30 classes, he demanded and achieved the highest levels of performance and efficiency in his cruising yachts.

His own Wallygator, first of the breed, turned heads not just for its striking appearance but also for its speed, once the boat began keeping company with out-and-out racers in European regattas. ‘People started saying, “but that’s a cruising boat, with teak and air-conditioning and everything, and she’s as fast as we are”’ he recalls.

Main picture: They may be based on a simple rule, but in terms of design, materials, technology and general sophistication, the WallyCento rigs are right up there with America’s Cup boats, according to Southern Spars’ Kevin Batten, who races aboard Galateia
Inevitably, as the Wally fleets grew through the 1990s and into the 21st century, racing results became part of their success.

This heritage is epitomised in the Wallycento concept. These are sleek, 100ft superyachts (the Italian cento relates to the length), designed to a box rule, employing grand prix technology to achieve outstanding performance. While these yachts take Wally’s signature contemporary design to another level, the rule also requires an interior that will offer comfortable cruising amenity as well.

The rule is quite simple, with 13 measurement factors and tight restrictions between minimums and maximums. Hull length for example is limited to 30m minimum and 30.48m maximum. Beam can vary between 6.5m and 7.2m and overall weight between 45,000 and 50,000kg. The rig limits are determined by the mainsail luff (42 to 43m), the foot (13.5 to 14m) and a maximum forestay length of 43m.

Four yachts have been built to the rule so far, although the first has since been modified, which means it no longer complies for racing in the Wallycento class. The most recent launching is Tango, a Mark Mills design with a Pininfarina-designed interior and built close to the extremes of the rule in terms of minimum displacement and maximum sail area.

As an indication of the massive research and development effort invested in these yachts, Mills says 49 hull shapes were tested in velocity prediction (VPP) and computational fluid dynamics programs to narrow down the best combination of features.

When it comes to masts, according to Southern Spars’ Kevin Batten – who sails on Galateia and also project-managed all the Wallycento masts – they are right up to America’s Cup standards in terms of design, materials and technology. ‘We use high and ultra-high modulus carbon fibre, thin-ply technology, which significantly improves the precision of laminate structures, and the full suite of analytical programs to optimise load and bend to match the sail plan.

‘A great deal of attention is paid to aerodynamics, ensuring that fittings, surfaces and attachments are as clean and smooth as possible.’

The rule does not set weight limits for masts, but within the overall weight budget of 45,000-50,000kg this is an area where weight reduction brings great benefits.

Titanium is extensively specified for fittings. ‘There is a major drive to make the masts as light and stiff as possible,’ says Batten.

There is a major drive under way to reduce the weight of these boats’ rigs to an absolute minimum, while making the masts as stiff as possible. Titanium is extensively specified for fittings and multi-strand ECsix rigging plays an important role in eliminating weight aloft. Extending the range of mast rake that these boats can achieve, as Tango’s design team have done, increases the complexity of maintaining rig tension through the range; but the benefit of extended mast rake, when sailing upwind, is that it enables the crew to keep the rudder angle at the optimum of 3-3.5°. As the breeze builds, instead of having to apply more rudder angle – and increasing drag – the whole rig is progressively moved forward.

As well as the masts, the rigging is also designed to be as light as possible to keep the fleet within its weight allowance. Future Fibres R&D manager, Jonathan Duval, knows more than anyone the benefits this rigging brings.

‘Our patented multi-strand ECsix rigging enables the Wallycento fleet to have the lowest possible weight aloft, greatly increasing its sailing performance whilst also making life on board more comfortable,’ says Duval. ‘Both of these elements are essential for a high-performance superyacht such as a Wallycento.’

Across the four boats launched so far, the rigs have been similar in a global sense, but customised to meet the particular requirements and priorities of each owner.

In the nature of a highly competitive fleet, albeit a small one, the progression from one generation to the next is continuous, in step with Southern’s and Future’s ongoing drive for development and refinement. Magic Carpet 3, the second Wallycento built, has recently received its second mast, the first in the group to upgrade.

‘Five years ago, their mast was state-of-the-art,’ says Batten. ‘But the development of fibres and laminates now means we can achieve stiffer and lighter masts and they want to keep up with that progress.’

Perhaps they plan to leapfrog beyond the current state-of-the-art. When Magic Carpet 3 debuts the new mast at the Maxi Yacht Rolex Cup in Porto Cervo in September, it will be the first in a new generation of Wallycento masts with even less drag and windage.

In similar vein, Tango’s design team wanted to take mast control to a new level and asked the Southern Spars design team for an innovative system to extend mast rake. Mills explained the thinking behind this at the boat’s launch: ‘Rudder angle is a really important component in maximising upwind performance, and to optimise that, you need to be able to rake the rig to adjust the centre of effort, to influence how much rudder you then have to put in.’

The idea is that in light airs you add rake to load up the rudder and as the breeze builds you let the rig go forward to keep rudder angles at about 3-3.5°. Mills says most large yachts do not pursue this degree of rake control, because it is too difficult. ‘We went in from the outset convinced that this was a key variable we needed and we worked all the way through to make sure we could deliver that.’

Many of these customisation details remain closely guarded secrets, but they provide a glimpse of the sophistication and power of the systems hiding below those expansive teak decks. As with all control adjustments, the implications cascade into a complex matrix of corresponding consequences and influences that must be accommodated. With an expanded degree of mast rake, for example, maintaining rig tension through the range becomes a factor.

All the performance features of the Wallycento rigs are reminiscent of the TP52 Super Series, where Southern Spars enjoys a similar status as the sole supplier.

‘In many respects, the Wallycento rigs are scaled up versions,’ Batten acknowledges, ‘although the TP52s take stiffness a step further. Some of the people who race on the TP52 circuit, America’s Cup and Volvo are also on board the Wallycentos, so there is an inevitable cross-pollination of ideas.’

In the nature of Wally’s devotion to innovate and improve performance, as well as to design aesthetics, additional focus goes into the finishing detail. Similarly, the dualpurpose nature of these yachts means the masts have to perform a wider range of duties.

In cruising mode, for example, they might have to support satellite communications domes. As the yachts switch to race mode for regattas, these extraneous items have to be easily removed to reduce weight and drag aloft.

In race mode, with the owners at the helm and some of the sport’s top professionals in the crew of 24, the competition is full-on. Off come the cruising sails, replaced by hank-on headsails and no-reef mainsails. Hydraulic control systems are set to rev into red-line territory with forestay and mainsheet loads up to 25 tonnes and eight tonnes respectively.

In the action-packed mark roundings, the pitman orchestrates the high-speed drops and hoists, listening out for different buzzer notes to tell him when halyard locks are releasing or engaging. Everything is choreographed and directed towards peak performance.

‘The racing is close,’ says Batten, ‘and very competitive. At the last Rolex Giraglia Regatta, after three races all three Wallycentos had identical scorecards, with a 1st, 2nd and 3rd place finish.’

Then, when the action is done and the racing gear is packed away, these yachts transform into powerful, luxurious cruisers ready to glide off to the next port, where, like apex sports cars, their lean and athletic lines never fail to draw admiring stares.