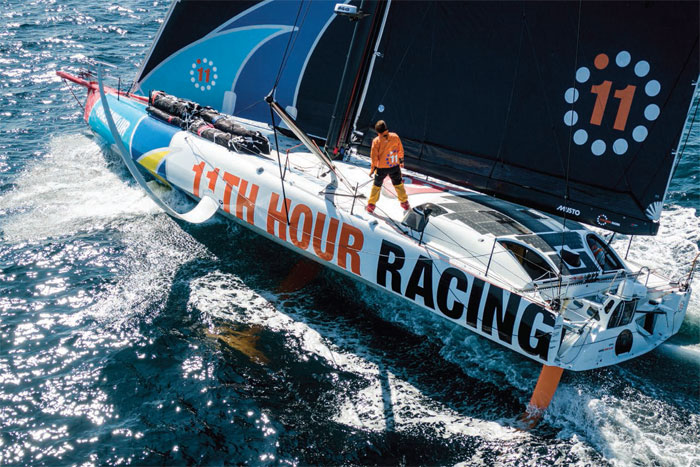 In the endless search for performance, how can sustainability be embedded into new boat builds?

Would it surprise you to know that the carbon footprint of building one new IMOCA 60 is about the same as the average footprint of manufacturing 105 Renault vehicles?

‘As an industry we’ve been moving much too fast in the wrong direction. We’ve seen amazing gains in performance but the indirect outcome is that our greenhouse gas emissions have gone through the roof. Collectively, we have this tunnel vision about performance at all costs and that has to change.’

We like to think of sailing as inherently sustainable but the uncomfortable truth is that to align with the Paris Agreement – which is the bare minimum of action needed to avoid catastrophic climate change – the racing yacht industry needed to cut its carbon footprint by at least half to achieve this first target by 2030.

Since the Paris targets were set, the yacht racing industry’s emissions have continued to increase and the task ahead now requires a full U-turn to achieve a radical de-carbonisation of our sector. 11th Hour Racing Team is on a mission to identify potential solutions, test their viability and share them with the industry.

These figures aren’t just theoretical estimates. They’re drawn from real data that has been measured and compiled in high-resolution lifecycle assessment (LCA) studies carried out with scientific rigour by two IMOCA 60 teams: Roland Jourdain’s IMOCA 60 project in 2010 and 11th Hour Racing Team in 2020.

Given that both of these teams were using robust approaches to minimise and measure their respective carbon footprints, the challenge is clear: ‘To solve this paradox we need to place sustainability at the heart of policy and rules for everyone,’ Foxall says.

CDK Technologies, the yard that built 11th Hour Racing Team’s new IMOCA 60, was already on a 100 per cent renewable electricity tariff when the project started.

This is a key first point for any project to address, with potential greenhouse gas emission reductions of 30 per cent or higher possible for builders and marine suppliers who shift from average grid electricity to 100 per cent renewable. The location of the build, access to local labour and short supply chains are also important. CDK was chosen partly because its two sites in west Brittany are right at the heart of the French racing yacht industry. With most of the project’s other suppliers nearby, transport of materials and components was kept to a minimum.

So why has the carbon footprint of an IMOCA 60 build doubled when it ought to have halved?

‘The complexity of designs and structures has increased enormously,’ Foxall explains, ‘Roughly twice as many man hours now go into the much more detailed construction of the hull, cockpit and deck. The technical specs of the carbon fibre and other materials used in the layup of cutting-edge composite hulls and structural components have changed significantly and by using a wider variety of increasingly specialised materials we’ve inflated the transport and delivery footprint.

‘It’s not uncommon for a flatbed truck to arrive in the yard with just one special piece of Nomex,’ Foxall says. ‘The increase in structural complexity requires more man-hours, energy-intensive cure cycles and waste, as an example the use of prepreg carbon generates its own weight in single-use plastic waste. Performance developments such as foil structures in particular have had a huge impact on the carbon footprint of the build process.’

Foxall, who is well known as a top-level ocean racer, now works full time as 11th Hour Racing Team’s sustainability manager – with a mission, he says, ‘to embed sustainability into the endless search for performance’.

‘As with all other teams we are working within the constraints of the class rules and the normal build timelines,’ Foxall says.

‘It takes at least 18 months to trial new materials and test them for reliability. So even though we started two years ahead of The Ocean Race, it was already too late to do something radically different, in terms of materials or process, that is not incentivised or required by the rules. So our focus was to explore the status quo of the sport and to tackle the challenges faced by all our peers: “what do we need to do to make our sport sustainable?”’

They’ve been working with Etienne Le Pen, a young French academic (and top Laser sailor) who took a 12-month internship as part of his masters degree at CDK Technologies while the team’s IMOCA 60 was in build. With Le Pen working full time at the yard, the team achieved a new benchmark in accuracy, detail and scope of the team’s lifecycle analysis – which covered all components of the boat, not just the hull.

Munro and Morgan, meanwhile, have researched and trialled next generation materials such as Amplitex flax fibre from BComp, bioresins made by Sicomin and Gurit, recycled PET core also from Gurit, and Powerribs, a bio-based material inspired by leaf veins, which also turned out to be a useful and alternative transfer medium for resin during the infusion process. Their research into another promising material, recycled carbon fibre tape, is still ongoing.

75kg of non-structural components made from these materials are already on board including hatch covers, fairings on the foredeck, internal furniture, steps, and the engine and battery boxes. That figure will rise next year to at least 100kg, quite possibly more.

‘Our role was to pilot the new IMOCA 60 rule coming in next year that allows items made from alternative materials to be removed from the boat’s measured light ship displacement, which allows us to add a bit more ballast,’ Morgan says. ‘If they decide to increase the allowance to 200 or even 300kg, we’d be ready to do that – we’ll find more and more areas to explore.’

For any full custom build, half of the composite materials that are used don’t even make it into the boat, they go into the plug and mould. Following the build of 11th Hour Racing Team’s new boat, their mould was used to build another Imoca, Maître Coq.

‘That’s approximately 150 tonnes of carbon footprint reduction passed on to them and each subsequent user, almost 25 per cent of the total build footprint for each reuse,’ Foxall says. ‘This underlines another key point for new policy and class rules, incentivising longevity and reuse.’

The build footprint, while large, is just 10-20 per cent of an initial ten-year lifespan of a boat, highlighting that not only class but most importantly event and race rule amendments are required to reduce these ultimately bigger impacts.

Foxall and Munro are now compiling a comprehensive design and build report to share with the rest of the industry.

The aim is to create a benchmark and roadmap that will enable other teams within and beyond the IMOCA 60 class to make well informed sustainable decisions without giving away any competitive advantage. Some of their top-level findings will be published in the next issue of Seahorse Magazine, with practical advice on how to apply them. The team’s full Design and Build Report is available now.