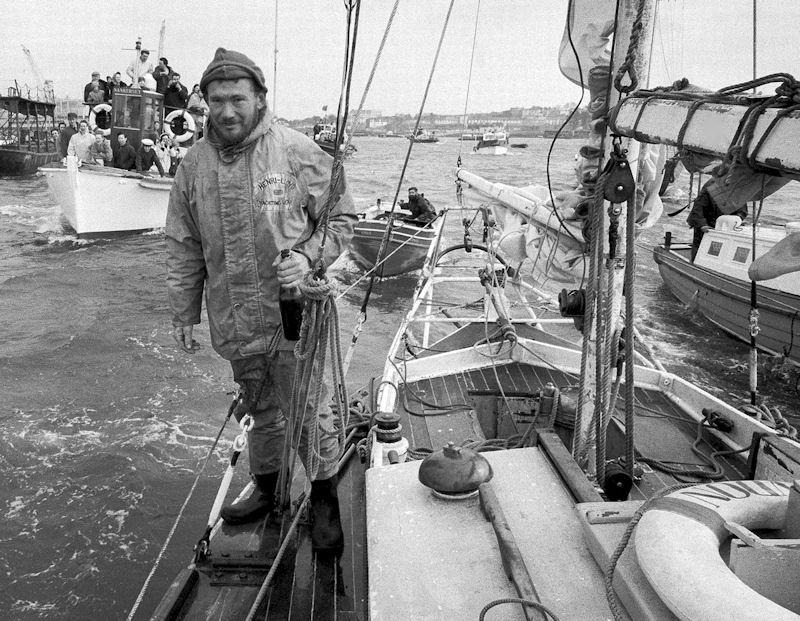 Double Olympic gold medalist Shirley Robertson sits down for a two part podcast chat with the first man ever to sail solo non-stop around the planet, Britain’s Sir Robin Knox-Johnston.

Sir Robin completed his ground breaking voyage in April 1969, after an astonishing 312 days alone at sea. having sailed his thirty two foot ketch ‘Suhaili’ thirty thousand miles around the planet. The voyage is one of the most documented in sailing, and was part of the famous Golden Globe race, initiated by the British newspaper, The Sunday Times. Nine entrants eventually left to compete in the Golden Globe, but Sir Robin was the only boat that finished, the physical and mental travails of the effort famously proving too much for many of the other entrants.

Sir Robin spent much of his voyage nursing “Suhaili’ around the planet, constantly running repairs as the savage effects of months in the ferocious Southern Ocean took a heavy toll. But his trusty craft was more than a match for the brutal southern storms, and it is with deep affection that Sir Robin talks of her now.

“She was a cracking little sea boat, a wave could wash right over and did on a few occasions, she’d just shake herself and bob back up, like a terrier really. I built up a huge affection for Suhaili, a tremendous trust in her, she is simple, she’s not complicated. Everything’s stronger than it needs to be, everything’s thought through. She’s very important to me, she’s been part of my life since I was 23, and I’ve done so much with her, she’s done so much for me too. I always say any fool could get her around the world, I proved it!”

Once passed New Zealand, and into the second half of his voyage, a troublesome radio meant Sir Robin struggled to make contact with anyone to inform of his progress, and he was assumed missing until he finally signalled a ship while passing the Azores, just fifteen hundred miles from home. News of his survival hit the front pages, and by the time he steered ‘Suhaili’ back into the English Channel, he was a household name in the UK. Met by a flotilla of well wishers, the shoreline around Falmouth lined with cheering crowds, Robin Knox-Johnston had become the first man ever to complete the ground breaking voyage.

In Part 2 of their discussion, the pair talk about life after the return from Sir Robin’s incredible 312 day journey.

Having completed his voyage, and cemented his place in the annals of the history of exploration, Sir Robin’s competitive streak soon saw him back on the global race course, and by 1977 he was joint skipper on an entry in the Whitbread Round the World Race, where amongst his crew was a certain Peter Blake. With the announcement of the Jules Verne Trophy, Knox-Johnston and Blake went on to famously form the eventual record holding team, ENZA New Zealand, breaking the established record in 1994 with a 74 day lap of the planet.

Robertson and Knox-Johnston then discuss how a trip with British mountaineer and expedition leader Sir Chris Bonnington inspired an idea that would become the ‘open to all’ crewed around the world adventure, The Clipper Race. It’s a race that has been on going now for over twenty years, and is currently in it’s twelfth, a fact that Sir Robin ranks as one of his greatest achievements.

“When I look at all the lives that have benefitted from the Clipper, and the number of those sailors, forty percent of them have never been on a boat before, who have taken up sailing subsequently as their sport, to my mind that is going to rank pretty highly because there’s over five thousand people now that have taken the sport up all over the world.” states Sir Robin, on being asked by Robertson what he sees as his greatest contribution to the sport.