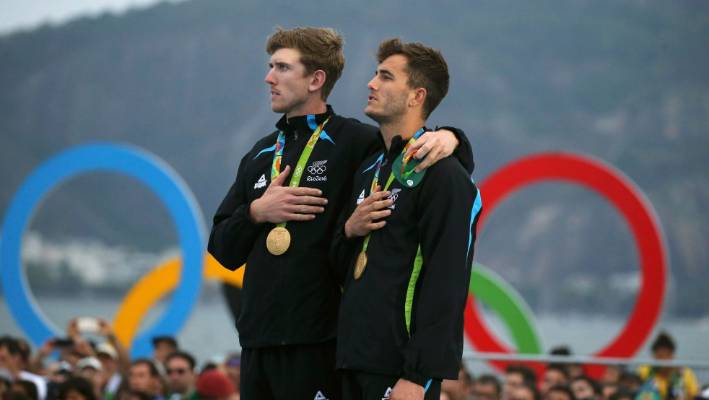 On the latest episodes of her podcast series double Olympic gold medalist Shirley Robertson goes back to her sailing roots as she talks about success and failure with six very different multiple Olympic medal winners.

The interviews span fifty two years of Olympic competition, feature a total of twelve medals, seven gold, and include some of the biggest names in Olympic Sailing.

The two part podcast kicks off with London 2012 Laser gold medallist Tom Slingsby, and his emotional account of how the surprise of failure in Beijing 2008 drove him to the top of the podium four years later in London. Slingsby’s is a fascinating account, starting with his memories of how, while watching Sydney 2000, he resolved to one day stand atop the Olympic podium.

“I’m not the most athletically gifted person, when I started training and sailing I was not a good junior sailor, before the Sydney Olympics, before I dedicated myself to it I finished 61st at the Radial Nationals in 1999, I was mediocre, but I said ‘I love this sport, I wanna do it and I’m gonna train and put in the work’ and I just felt like a regular kid, I just loved it and dedicated myself to it.”

British 470 Women’s Olympic Champion Hannah Mills tells how disruptive a postponed Olympics has been, having decided to return to defend her crown after her win in Rio 2016.

Mills goes on to reveal to Robertson how the relative disappointment of a silver medal at her home Games in London 2012 really fuelled the determination for herself and crew Saskia Clarke, as they resolved to go the distance one last time together, in a bid to go one better and win in Rio. Mills discusses the Rio regatta, and what finally winning Olympic gold with her best friend meant to the pair as they began to realise their achievement.

From the amateur Olympic era of the 1960s and 70s Robertson then interviews British Olympic sailing legend Rodney Pattisson, a double Olympic gold medallist from Mexico City 1968 and Munich 1972 and a silver medallist from Montreal 1976. Pattisson sailed the Flying Dutchman Class, was a submarine officer in the Royal Navy, and is widely known as being one of the forefathers of the ‘no stone unturned’ approach to modern Olympic sailing. His tales of fine tuning and optimisation while simultaneously duping his opposition are not just amusing, but also show a ruthless and dogged approach to competition, here explaining a dominant display at the Munich Games of 1972…

“People didn’t know I’d built another boat, they still thought it was the old one and I kept that a secret right up until after the Games. It had the same name on the side of the boat, it had the same colours. One of the things I did was that the old, slower boat had had a prang, and so there was a repair inside the boat that you could see on the varnish work, so I copied that repair and anybody that had a suspicion at all looked underneath the stern deck, knew about the collision and thought it had to be the same boat.”

Part 2 kicks off with one of the podcast’s most requested interviews, as Shirley discusses the remarkable Olympic history with reigning NACRA 17 Olympic champion Santiago Lange of Argentina. Santi discuses the delay in the Games, and how the postponement is effecting his build up, before delving into that incredible Olympic history. Lange has competed at six Olympics, Tokyo will be his seventh campaign, but it was his gold medal win in Rio that is perhaps the most remarkable of Olympic success stories.

Just a year before the Olympic Regatta, Lange was diagnosed with lung cancer, and underwent surgery that put his Olympic dreams in severe doubt, but still managed to sail to victory in what was one of the most popular medal wins of all time.

It wasn’t until 1988, at the Korea Games, that sailing held its first ever dedicated Women’s Class, sailed in the 470 dinghy. In dramatic and challenging conditions, it was American Lynne Jewel Shore and her helm Allison Jolly that took the win, claiming the only gold medal for an otherwise disappointed US Sailing Team. In her interview with Robertson, Lynne reflects fondly of a rigorous and intense build up to the Games, as the duo tried to prepare for the treacherous Korean conditions…

“I can’t watch the footage, I look at it and I think ‘what the heck were we doing out there’, it really was dangerous conditions, it was crazy. I went there feeling very comfortable and confident that we had done everything we could to be prepared for the moment.”

Three of Robertson’s interviewees have had their Tokyo 2020 Olympic campaigns completely disrupted by the postponement of the Games to 2021. The podcast wraps up with defending 49er Olympic Champion Blair Tuke, discussing how the postponement allows full concentration on the defence of the America’s Cup, and talks about the logistics of running simultaneous Cup and Games campaigns. He delves into his partnership with Pete Burling, how the pair won silver in London 2012, and then didn’t lose another regatta, all the way through to claiming gold in Rio by an unprecedented Olympic points margin.