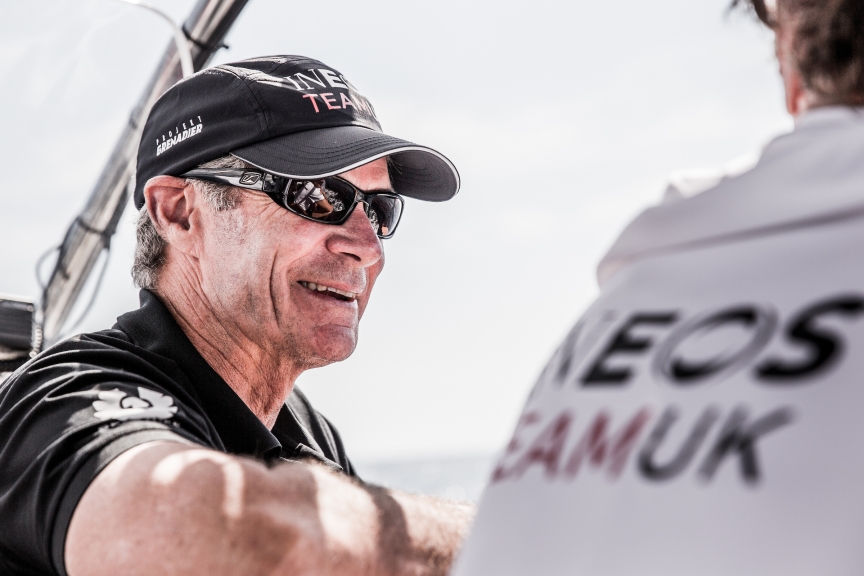 Currently in the role of CEO at British Cup hopefuls INEOS TEAM UK, Simmer is into his eleventh Cup campaign, a remarkable feat for a man who’s relationship with the oldest trophy in world sport goes back to 1983.

As a twenty six year old, Simmer sailed as navigator onboard Australia II in the 26th America’s Cup, and was a vital part of John Bertrand’s afterguard in the Cup that finally put an and to the longest winning streak in world sport.

For one hundred and thirty two years the New York Yacht Club had successfully defended twenty four challenges to the Cup, but Alan Bond’s team onboard Australia II finally managed to uproot the trophy and take it back to Australia, to a hero’s welcome. Simmer’s memories of this time are a remarkable glimpse into what was one of the most historically significant moments in international sport.

“When we heard that the Prime Minister of Australia was essentially calling a holiday because we’d won this event, everybody was just shocked by the magnitude of what we’d done. I remember thinking ‘Wow! He called a holiday! What’s that all about,,,? We had the ticker tape parade in Perth, it was quite a big deal.”

Post AC26 Simmer initially returned to work as an engineer, but was back working with John Bertrand for the 1995 Cup in San Diego. As design coordinator, Simmer was responsible for the build of One Australia’s Cup boat, but the outcome of their race against New Zealand in the Challenger Series would become Cup legend.

“It was quite rough and choppy and there was some debate whether we’d race because it was so windy and I’d been arguing we should race so we can find out what would break. The engineers were a bit nervous, but we raced and famously the boat buckled in the sheerline and broke in half and sank.”

Simmer’s stories from throughout his Cup career are illuminating, and provide a wonderful insight into a life spent chasing one of the most illusive trophies in world sport. From his campaigns with Swiss team Alinghi, through his relationship with Russell Coutts and his time spent campaigning with Oracle Team USA, Grant Simmer has played a pivotal role in the modern America’s Cup era, and has an almost unparalleled place in the sport.

Throughout this two part podcast, Robertson and Simmer reflect on amongst other things, the remarkable win in AC34, as Oracle Team USA came back from the seemingly impossible to beat Emirates Team New Zealand, and then how the tables turned in the waters of Bermuda in 2017.

The pair finish their revealing chat by looking to the future, and the rapidly approaching America’s Cup in Auckland, as Simmer discusses his role with Ben Ainslie’s Cup team INEOS TEAM UK, and how he hopes his decades of Cup experience will help the British team finally win the the Cup back for a nation that haven’t held it since it’s very first regatta one hundred and sixty nine years ago..