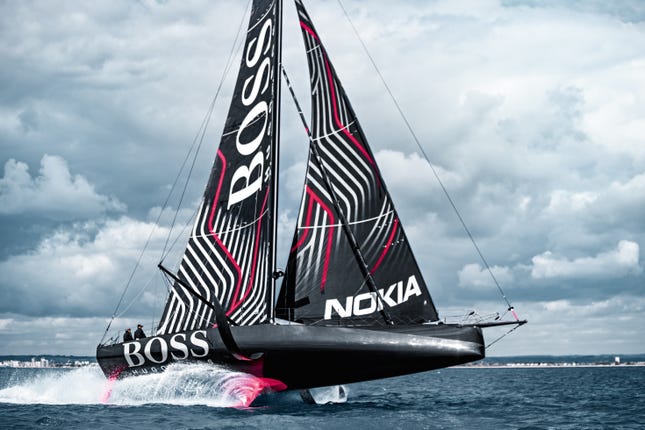 The world renowned Vendee Globe, the non-stop solo lap of the planet, is the topic of this month’s podcast, as Shirley Robertson talks to five soon to depart skippers and one IMOCA designer in this two part Vendee Globe extravaganza.

The podcast kicks off with Vendee Globe veteran Alex Thomson (Hugo Boss), about to cross the start line of the legendary race for an unprecedented fifth time. Thomson’s record in the race holds true to the gruelling fifty percent attrition rate that has seen him finish the lap of the planet twice from four attempts.

Thomson is well known in the offshore sailing world for running an impressive campaign with long term sponsor Hugo Boss, each of his attempts has seen him race one of the newest boats in the fleet, and this time around is no exception. His new 60ft IMOCA was one of the last to be launched and sits at the forefront of offshore evolution, utilising a state of the art set of foils and progressive hull design.

“Hugo Boss is for us the culmination of nearly twenty years and with this boat we felt we had the confidence to make some bold decisions that perhaps we wouldn’t have made before. So this time we were very bold and I’m as happy as Larry you know. The feeling of these things going along, you’ve got the traditional sound of a boat going through the water and sometimes you feel yourself fully in the air, it’s an odd felling to be on a monohull where you physically feel the acceleration, it’s been a massive change since I first started.”

This year’s edition sees thirty three entrants attempting the solo non stop charge around the globe, with a fleet that for the first time sees foiling mono hulls outnumber the non-foilers. Nineteen of the fleet boast foils, the design of which vary significantly. The favourites are very much the newest designs, the eight second generation foilers built and designed after the finish of the last Vendee, which saw the first foiling monohulls taking part in this race.

As with the rest of the sport, the evolution in offshore foiling has been fast, and the results are stunning. World renowned naval architect Juan Kouyoumdjian has two brand new boats in this edition, and in his interview here provides a revealing insight into the design processes that go into a new generation IMOCA.

“The first page of the rule book, rule 101 I think it is, says ‘everything that is not explicitly forbidden is therefore allowed’ so you look at that and you think ‘this is my favourite book you know.’ But there’s so many compromises to be done because the best theoretical boat is probably the opposite of what a single handed guy needs to go around the world.”

Juan K goes on to discuss the fleet, the performance gains that the new foils have brought, and how these gains may effect the level of racing as the fleet charge south down the Atlantic and into the Southern Ocean.

Robertson also talks to three Vendee Globe rookies across the two podcast editions, in Part 1 talking to rising French star Clarisse Cremer (Banque Populaire X) about her campaign sailing for the team that won the last edition of the race with Armel Le Cleac’h.

In Part 2 Robertson catches up with long time friend and previous podcast guest Sam Davies (Initiatives Coeur), as she prepares for her third Vendee attempt. Sam finished fourth at her first Vendee back in 2009 but four years later suffered a cruel dismasting after just five days at sea. This time around, she’s racing in another of the retro fit foilers, and is confident, after a well thought out build up to the race. As a French resident, she’s also perfectly placed to explain just how big the race is in France.

“The Vendee is huge in France, its a race and a competition but it’s not just that, it’s huge, all the schools follow the Vendee Globe while it’s happening. Maybe the reason why it’s so huge is because it’s so simple at the same time as being so hard, and such an extreme event because it’s just one person on a boat sailing around the world non stop without assistance.”

Robertson also talks to the impressive Charlie Dalin (Apivia), about taking on the race for the first time, and how his skills as a naval architect helped finesse his new generation foiling machine. Robertson also meets the first ever German entrant into the race – the very experienced Boris Herrmann, skipper of Sea Explorer Yacht Club de Monaco.