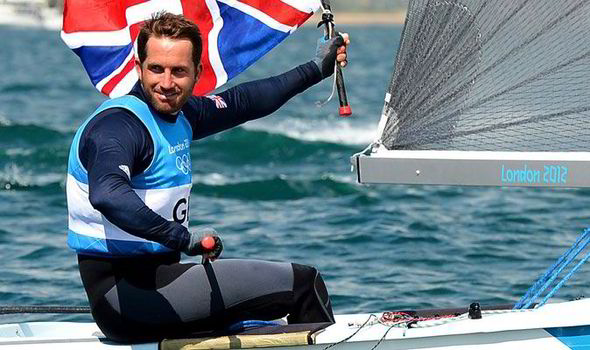 The most successful Olympic sailor of all time, Ainslie won four golds and one silver over an Olympic career that culminated in front of thousands at his home games, London 2012.

Standing atop the podium at the sailing venue in Weymouth, Ainslie accepted his fourth gold medal to draw the line under an Olympic career that had started as a nineteen year old in the 1996 Games in Atlanta, USA.

Throughout his early appearances on the world stage, Ainslie often found himself locked in battle with Brazilian sailing maestro Robert Scheidt, and as he recounts those early tussles to his then Team GB team mate Robertson, Ainslie’s recall and attention to detail is impressive. One false move, one sloppy tack, and against Scheidt, Olympic success could vanish.

In 1996 he fell foul of the wily Brazilian, and had to settle for silver, but four years later, as the gold medal went down to the final race again, a determined and steadfast Ainslie sailed circles around his great adversary, in a display of control and aggression that split the sporting world.

“If you can sail, and get into someone and it’s within the rules, and that’s not an easy thing to do, that’s the game, in my view. And there was quite a lot of controversy about it at the time….from Roger Bannister, he’s a hero in England obviously, the first guy to break the four minute mile…and I could understand (the criticism) but it’s interesting how the sport’s developed…..I think maybe it was a little bit ahead of it’s time.”

Ainslie and Robertson spent three Olympic Games as team mates, twice claiming gold at the same Games, in Sydney and Athens. Their collective recall is therefore insightful, as in this Part 1 of the podcast they unpick Ainslie’s Olympic career before reminiscing on Ainslie’s final Olympic triumph at London 2012.

“You can’t really beat that can you, a home Games and being able to get a fourth gold medal in front of a home crowd, it was an incredibly special moment. I’ve always liked that element of being up against it, the tougher the challenge, the more exciting it is. It’s a bit of a strange approach, you really shouldn’t be looking to make life hard for yourself, but there have certainly been a few occasions where I’ve managed to do that, and then had that challenge and taken it on and found that rewarding in some kind of perverse way.”

Robertson’s chat with Ainslie continues for a second part, in which the pair discuss Sir Ben’s America’s Cup career and how his team is preparing for the 36th America’s Cup, in Auckland, New Zealand.