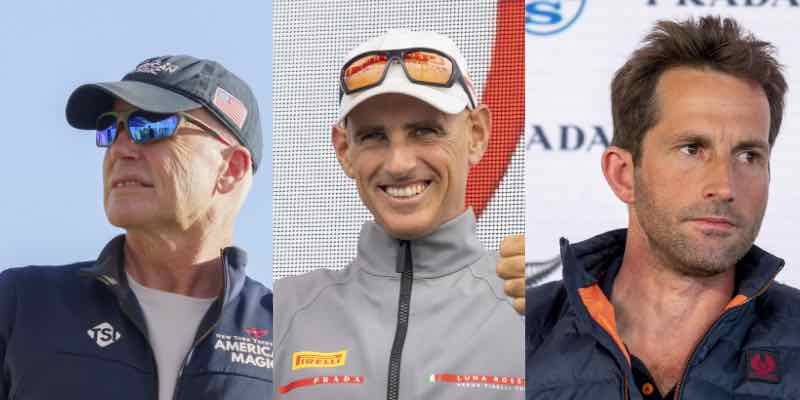 The only challenger team to have beaten all three of the other teams in the December racing here in Auckland, American Magic put in a solid performance pre Christmas, although Hutchinson was quick to point out that they still didn’t win the regatta. He did however reveal how happy the team were to be back out on the water mixing it up with their rivals.

“Andrew Campbell commented that for the last eighteen months our simulator and our VPP have driven us to sail the boat in a different way and we’re learning how to sail the boat around how these tools have taught us to sail the boat, and they’re quite good, quite exciting, and yet it just hits you right in the face that all this equipment that you have is good, but it’s not real life, and so we have to get back on the water and do it in real life.”

From Challenger of Record Luna Rossa Prada Pirelli, Robertson talks to helm Francesco ‘Checco’ Bruni, unique in the Cup in that he is co-helm on the Italian boat with Australian Jimmy Spithill. Bruni starts by reflecting on the team’s performance during the December races.

“We definitely felt we were very strong in the light wind and missing something in the stronger wind so our focus obviously is to work on that weakness, but we knew already that all our components for that period of the racing would have been good in the lighter wind.”

Robertson’s third chat is with a returning podcast guest, Sir Ben Ainslie, team principal and skipper of British challenger Ineos Team UK. The British boat suffered performance issues during the December racing, at times struggling to get up onto the foils in the lighter airs. Forthright and pragmatic in the press conferences that followed racing, sitting down with Robertson for the podcast, a determined Ben Ainslie was hopeful that his team would be able to become more and more of a threat over the running of the Prada Cup.

“You can certainly change your measurement certificate through the Prada Cup through the different rounds, and also how you sail the boat and set the boat up. So I think you’ll see a lot of improvements through the Prada Cup, and whoever gets through, we’re certainly going to have to push each other hard for that Challenger to give the Kiwis a race, because right now they’re head and shoulders above the three other teams and we’ve really got to up our game to be competitive against them.”