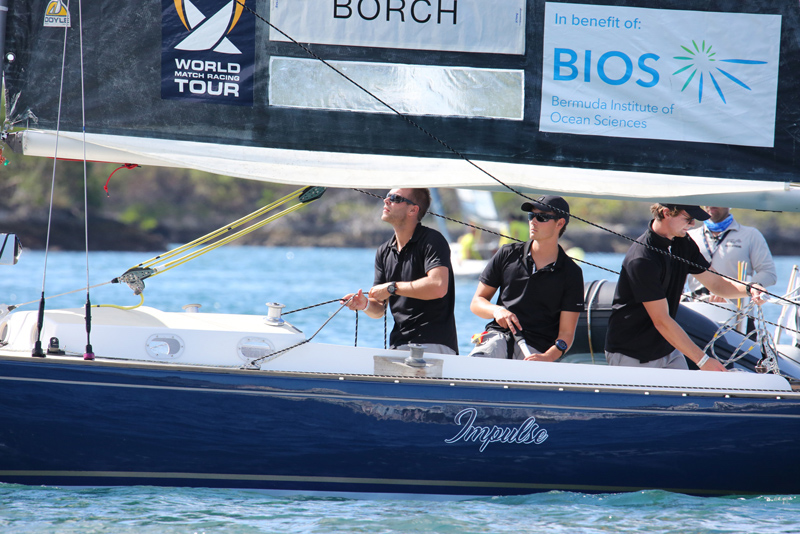 A pair of Scandinavian crews, Jeppe Borch’s Borch Racing Team from Denmark and Johnie Berntsson’s Berntsson Racing Team from Sweden, have advanced to the Quarterfinal Round of the 70th Bermuda Gold Cup and 2020 Open Match Racing World Championship after placing first and second, respectively in the Repechage Round.

Borch and Berntsson are somewhat on opposite sides of the ledger at this regatta. The upstart Borch, 23, sailing his first Bermuda Gold Cup, is the youngest skipper remaining in the regatta. Berntsson, 48, is one of the event’s grizzled veterans: a 12-time competitor, six-time finalist and two-time winner of the King Edward VII Gold Cup. In the lightest conditions of the week, a 4- to 8-knot westerly, they shared one common thread – they won enough races to advance to the quarterfinals.

Berntsson’s two losses in the seven-race Repechage Round were to the two youngest skippers, Borch and 23-year-old Matthew Whitfield of Great Britain. But he shook them off and put forth a dominant performance against 25-year-old Jelmer van Beek’s Team Dutch Wave in the final race to stamp his ticket to the quarterfinals.

“You’re always nervous in light air because you never know how things will turn out, but we were quite calm onboard,” said Berntsson (left), who won in 2008 and ’14. “We were confident in our speed. Of course, there can be windshifts after we choose a side, but generally we were quite confident. Anders (Dahlsjö, right), my tactician, did a very nice job today. We made one tactical mistake in seven races, 14 upwinds, that’s a very good record and I’m proud of my team.”

Borch also seemed calm and collected in the light winds. His crew stormed out of the gate to win their first five races and finished the round at 6-1 for the top spot. Now, the skipper who placed third overall at the 2019 Youth Match Racing World Championship finds himself in the quarterfinals alongside multiple world champions and event champions.

“It was difficult for us to set a goal coming into this regatta,” said Borch. “The other teams are really good and have been in the game for so long. We’re coming in as underdogs and especially now in the quarters, we’re in the big boys’ game now.

“It’s a dream come true of mine. I don’t know how many videos I’ve watched online of those guys, to be in the quarterfinals against them is huge,” Borch said.

The matchups are intriguing:

Canfield’s two victories at the Bermuda Gold Cup in 2012 and ’18 came at the expense of Berntsson, who lost the two series by a combined score of 6-1. Can Berntsson turn the tables on Canfield this time?

Robertson, from New Zealand, versus the Australian Mirsky continues the trans-Tasman rivalry at the Bermuda Gold Cup. In years past New Zealander Russell Coutts took on Australians Peter Gilmour and James Spithill with some great success, while the final in 2015 saw New Zealand’s Adam Minoprio defeat Australian Keith Swinton.

Williams, the reigning champion and six-time world champion, and Monnin are familiar foes at the Bermuda Gold Cup with a combined 25 appearances, although their head-to-head record through the years was unavailable at press time.

Poole, 31, versus Borch represents the next wave of match racers. Just five years ago Poole finished the Bermuda Gold Cup with a 1-9 record in last place. For him to turn that performance around is a testament to his own growth as well as his new crew, featuring Sam Baron-Fox, Matt Cornwell and Chris Draper.

The first warning signal is scheduled for 0930 local time today.