Skip to content
You are here
Home > LATEST > Sam Davies: Still getting better and ready for challenge of her first new boat 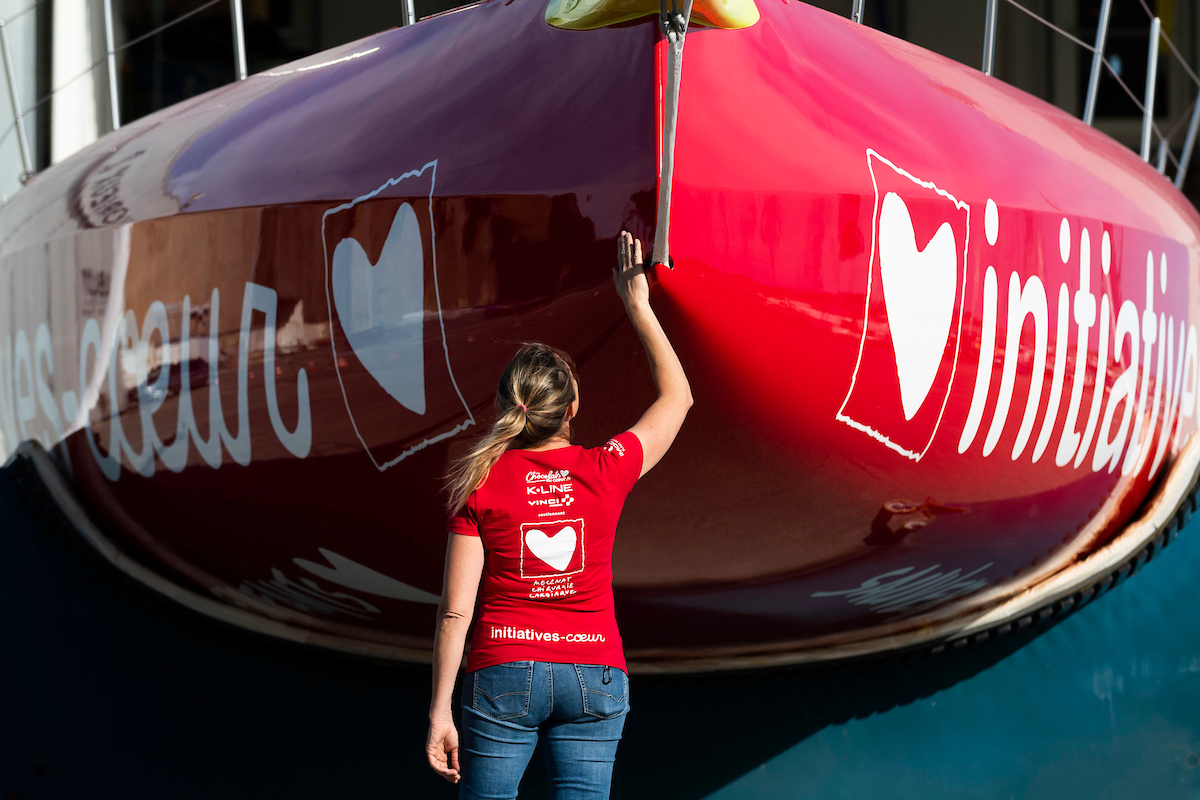 She has waited a long time for a new boat, but now she has it – a gleaming bright red Sam Manuard-designed flying machine, in the livery of Mécénat Chirurgie Cardiaque, and paid for by the same team of sponsors who funded her old one – writes Ed Gorman.

So well known in France, yet still struggling for recognition in her native Britain, Sam Davies can’t wait to get to grips with the first new boat she has had in an epic IMOCA career that started back in 2003.

At the age of 47 – she will be 50 when she takes the start of the next Vendée Globe in 2024 – she believes the long wait has not only been worth it, it has been a vital learning experience.

“I don’t feel like I’ve been waiting for ages and should have had this years ago, because I probably wouldn’t have done it justice or have the team around me I now have,” she told the Class, as the new Initiatives-Cœur slowly emerged from its shed in Lorient for the first time.

Some IMOCA skippers think of their boats as impersonal machines, with no personality or spirit. Others are more sentimental and Davies is definitely one of those. As she watched her new thoroughbred, which is based on the molds of L’Occitane En Provence (now Bureau Vallée), being wheeled into the Breton sunshine she remarked: “It will sleep outside for the first time in its life tonight…”

So what motivates this extraordinary sailor who won huge plaudits for the way she completed the Vendée Globe last time out, alone at the back of the fleet, after having had to stop for repairs in Cape Town? Davies just loves sailing and her appetite for it is showing no signs of diminishing.

“I think it’s the passion for the sport, and I guess the knowledge as well, that I feel like I am capable of doing better and better,” she said. “That’s the thing with this sport – experience counts for so much. I am naturally quite patient, so it was never a case of sailing round the world and then finding something else to do. I always want to do something the best I can, and that takes time and hard work and commitment.”

She says age has not diminished either her enthusiasm or significantly affected her ability to compete at the highest level. “For sure everything changes as you grow older and I think you learn to do stuff differently,” she explained. “My knees are not quite as good as they were, so I don’t go running any more. I do other stuff for cardio-fitness. Physical fitness is really important for what we do but it is not physical strength that makes a difference. That’s why this is a mixed sport for women and men and for skippers of any physical stature. But I do listen to my body a lot more. I am more careful because I know I want to keep doing this for another few years, and I want to look after myself to be able to push my boat as hard as I can.”

Davies is clear that the next Vendée Globe is her real target, but she is also certain that she will continue sailing after that too. She says the solo round-the-world race – that she has started three times, with a best finish of fourth back in 2008/’09 – remains “unfinished business” for her. Whether or not the 2024 edition will be her last depends on how well that race goes.

“For me the only thing I really want to do is achieve a really good result in the next Vendée Globe,” she said. “And I don’t look beyond that because that is so hard to do and I am putting all my enthusiasm and energy into doing that. The race does feel like unfinished business,” she added. “I have no idea what I mean by ‘a really good result’ because the IMOCA fleet is evolving so much now and it probably depends on the line-up in two years’ time. To me, what is important is to finish the race and to finish the race in a way that me and my team can be proud of.”

She also said that her ranking in the next Vendée Globe might not be the most important sporting element. In an increasingly competitive fleet, where skippers now finish the global course within hours of each other after 80 days at sea, she says her time on the water could be a better measure of the quality of her performance than her ranking number.

“So not necessarily the ranking, but it could also be how many days you take to complete the race,” she said. “With this boat, I kind of feel like the challenge is to try and make our boats achieve higher average speeds offshore and we haven’t really worked out how to do that – that’s the challenge of the next three years.”

While the new boat is based on the lines and design of the former L’Occitane En Provence, with its signature scow bow, Davies and her team have made many tweaks and changes to develop it under Manuard’s guidance. Among key areas have been foil design, weight distribution and the still on-going development of the cockpit and interior with an emphasis, as Davies puts it, on “skipper preservation.”

Having sailed for years on an IMOCA with first generation foils and a conventional bow treatment, the British skipper is looking forward to seeing how the latest thinking in those areas transfer into improved performance. “The innovative hull shape on the new boat is pretty interesting,” she said. “I’ve never sailed the scows, but I’ve heard so much good about them, so I am really looking forward to comparing that to what I am used to.

Obviously we’ve got our new foils which, in theory, are a lot more tolerant than the old ones. Again in the last two years, there have been massive improvements in foils and I’m looking forward to seeing the difference in using them and the sensations of sailing with them.”

The new boat brings with it pressure on Davies to show that she can be competitive in – more or less – the same generation of machinery as the top sailors in the Class, but that’s not worrying her. “I am not the only one with a new machine, so we are all in the same boat, so to speak,” she said. “But actually it is really exciting because it has been frustrating at times in the last few years to just not have the power to keep up – there were times when there was nothing you could do and you want to be up there.”

Back on the motivation issue, Davies is keen to underline that her project continues to be more than just a professional sporting activity. It has one of the strongest dual-purpose structures within the IMOCA fleet. It brings together three main sponsors – Les Chocolats du Coeur, K-Line and Vinci Energies – behind the banner of raising funds for the remarkable Initiatives-Coeur programme, that delivers heart surgery in France for children from the Third World.

Davies has been an effective figurehead for this campaign and it spurs her on. She has discovered in the last few years that the better she does on the racecourse, the more the general public responds and gets behind the campaign and she is sure the new boat will play its part in continuing that trend.

“The charity really, really needs us,” she explained. “So we now have all the green lights to carry on and it’s a big mission. I love doing something that’s not just professional sport, which can often be quite selfish. This project has a lot more than just sport around it, not just for me but for the whole team as well.”

She is particularly delighted that her sponsors have stayed with her, something that did not necessarily look likely a few years ago. But her performance in the last Vendée Globe – in the race and outside it – proved decisive in changing their minds. “I am very proud that the same sponsors are with us with the new boat – that wasn’t a given,” she said. “It was almost the opposite before the start of the last Vendée Globe. Probably two of the three wouldn’t have carried on, but after that race they changed their minds and said ‘we’re backing you for whatever you want to do.’”

It’s going to be fascinating to see how Davies gets on as she and her team develop her new IMOCA and bring it up to speed, first at the Défi Azimut-Lorient Agglomération in September, and then on the transatlantic course in the solo Route du Rhum-Destination Guadeloupe in November.