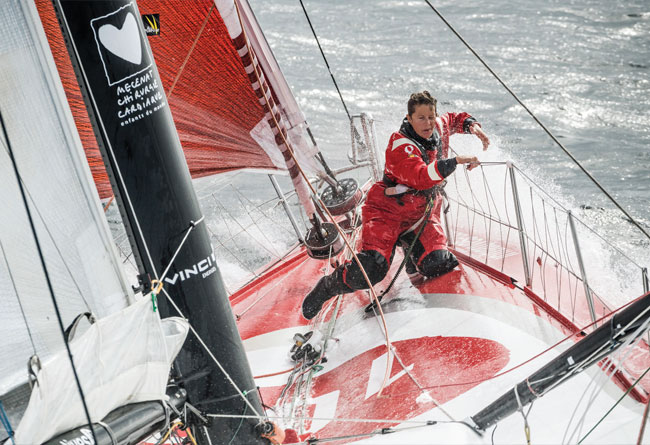 Speed, reliability, skipper comfort –so far it is all going the right way for Sam Davies’ third Vendée Globe campaign.

‘I spent five days non-stop in full foulweather gear and my Musto kit was amazing,’ says Sam Davis, when discussing the first five days of the recent Route du Rhum. ‘It was absolutely epic weather, some of the worst conditions my boat has ever faced,’ Davies adds, recalling the storm that crushed part of her hull and knocked her out of the race along with almost half of the fleet.

There’s a crucial correlation between comfort and speed, which sailors ignore at their peril. It has ever been thus, but today’s singlehanded ocean racers are on a steeper learning curve than ever as they push the outer limits of physical and mental endurance while battling the violent motion, brutal shock loads, deafening noise and utter fatigue of bashing and slamming a foiling Imoca 60 through heavy weather at full tilt.

The Route de Rhum is a notorious race for gnarly starts – in November the Bay of Biscay often lives up to its evil reputation – and an additional, unusual challenge of this race is the sheer size of the fleet. With 123 yachts jockeying for position on the start line, there’s a lot of closequarters, high-speed manoeuvring – an exhausting business for a solo sailor in a powerful boat that’s been designed and optimised for ocean passage-making rather than short tacking. Getting away cleanly can be quite a challenge.

‘I started in light thermals and got a bit wet,’ she says, ‘then changed into my proper Musto ocean kit – thermal base layer, Frome mid layer, HPX Gore-Tex Pro Series. After that, I couldn’t allow myself to get wet, never going on deck without a dry top and my fleece-lined waterproof hat, affectionately known as the duck hat.’

Long-term comfort is crucial, she explains: ‘On a singlehanded ocean race in a boat like this, you have to wear the same set of clothing for at least the first few days. Your offwatch time can never be more than 15 to 30 minutes so there’s no time to get gear on and off, even to sleep – you just live in a full dry suit. In my case, that’s a lighterweight MPX Gore-Tex Pro Race Dry Smock and heavy-weather HPX Gore-Tex Pro Series Trousers. The French guys are mostly still wearing hoods and collars but they’re starting to see the benefits of the dry top and duck hat.’

The Route du Rhum was the first real test for Davies’s boat, Initiatives-Coeur, following a major refit. The reengineering of her 10-year-old VPLP design – which began life in 2010 as Michel Desjoyeaux’s Foncia; placed second in the 2012 Vendée Globe as Banque Populaire with Armel Le Cléac’h at the helm; and then came third in the 2016 Vendée as Maître Coq with a modest pair of foils added by Jérémie Beyou – is a potentially pivotal project for the Imoca class.

If Initiatives-Coeur can indeed remain competitive against several generations of newer Imocas it could be a game-changer for grand prix ocean racing, lending a new lease of life to other old boats and making the sport more accessible by lowering the cost of entry.

‘My boat is heavier than the newer ones and its centre of gravity is not quite as good,’ she says. ‘Hull shapes have evolved but we should be able to overtake the 2016- generation boats, at least the ones that haven’t been modified in a similar way, which is very exciting.’

The Imoca class has been encouraging, Davies says. ‘They want the boats to last as long as possible and the grandfather rule helps keep boats like mine competitive. I don’t have to have a one-design rig, so I can adapt the sailplan to suit how I sail. The difference is in the crossover: the overlaps are bigger, so there are fewer gaps between my sails.’

The hull damage in the Route du Rhum was a setback for Davies and her team, but also a useful crash test for the three-year development project to prepare for their ultimate goal, the 2020 Vendée Globe. ‘We’ve been following an upgrade path that was created in 2017 when we bought the boat,’ she says.

‘That first year we essentially did nothing – we were getting used to how the boat performed – and since then we’ve had two big development years. During the first winter of 2017-18 we changed the ballast, adapting it to the rule change. We changed the sailplan, installed new electronics, developed a new autopilot and designed a system to adjust the rake in the old foils.’

It wasn’t the foils that failed in Biscay. ‘Long before I got back to Lorient, in fact very soon after it happened, I had a pretty clear idea of what had happened,’ Davies explains. ‘When you put foils on a boat, it sails with the bow more up in the air and the slamming zone, which is usually in the bow, comes further aft. In the new Imocas, the slamming zone is monolithic singleskin carbon to cope with this. My boat is sandwich construction with a Nomex core, which is quite brittle and not a great shock absorber.

‘When the foils were fitted for the last Vendée Globe, extra reinforcing structure and longitudinal stiffening was added but they didn’t change the core. Last year we made some rake adjustments with the foils and changed the forestay angle to get the boat more airborne.’ With flatter areas of the bilge slamming hard in big seas, the Nomex core was crushed.

‘We’ve now got several experts working with us to help decide what needs to be done,’ Davies says. ‘To change the core from Nomex to foam, the exterior skin has to come off. Removing the inner skin would be an even bigger job because all the interior structures would need to be taken out. Unfortunately the hull moulds don’t exist anymore, which makes it more difficult.’

Other Imoca skippers rallied round offering help, ideas and advice. ‘Singlehanded sailing is like that,’ Davies says. ‘We keep our performance data to ourselves, obviously, but when it comes to things like keeping a boat in one piece, we all tend to share knowledge and experience. We all have to get heavily involved in the technical side of things, we have to know how to repair our boats.’

Next on the refit schedule is a new, more powerful set of foils. ‘We’re working with Guillaume Verdier who designed foils for some of the latest Imocas, like Charal’ Davies says. ‘He’s really into the recycling aspect of this project – rather than throwing away an old boat, we’re re-engineering it. We’ve also cut out the old foil cases and we’re deciding where and how to insert the new ones. At the end of this refit, the boat will be more or less as I want it for the Vendée Globe. After that, we’ll focus on making it solid and strong, as reliable as possible. And I’m getting a new rig in 2020, before the English Transat.’

Recycling and re-engineering isn’t the only remarkable aspect of the Initiatives-Coeur story. There’s also a unique arrangement with the team’s sponsors who have donated nearly all the advertising space on the boat to a charity, Mécénat Chirurgie Cardiaque, which brings children from impoverished countries to France for heart surgery. For every “like” on the team’s Facebook or Instagram page, the sponsors give the charity €1. The scheme has already raised €2 million and saved 176 children’s lives – and counting.

Davies, who has volunteered with the charity’s cardiology team in Burundi and meets some of the children in France, says it’s a great source of inspiration on bad days at sea. Davies also has an R&D role with Musto, providing feedback for the next generation of technical clothing for sailors. ‘Solo ocean racing is definitely the best way to test gear,’ she says. ‘What we do pushes technical clothing design to the limit; we’re the best ones to find weak links.’

Foiling boats are a game-changer. ‘We’re not fully flying yet and already the landings are getting more extreme,’ she says. ‘The foils do absorb some of the shock loads created by the faster boatspeeds but it’s a lot harder for us to stay upright. We’re moving around on our hands and knees, finding places to wedge ourselves in to avoid being thrown around.’

‘The gear we use is definitely going to change,’ she says. ‘It’s going to have more protection integrated into it. That’s already happening with inshore foiling racers, but a lot more development is needed. Their kit doesn’t have to be worn continuously for three days in a row; it doesn’t have to be breathable. We don’t have off-watches anymore, so there’s no time to get in and out of kit.’

When you face the world’s most extreme ocean conditions, you need the world’s best ocean sailing clothing,’ says Nick Houchin, Musto’s head of marketing for sailing. ‘We rely on sailors like Sam, who are at the top of their game, to test our new products at sea before we bring them to market so you can be confident that our Ocean Sailing garments are the very best you can buy.’