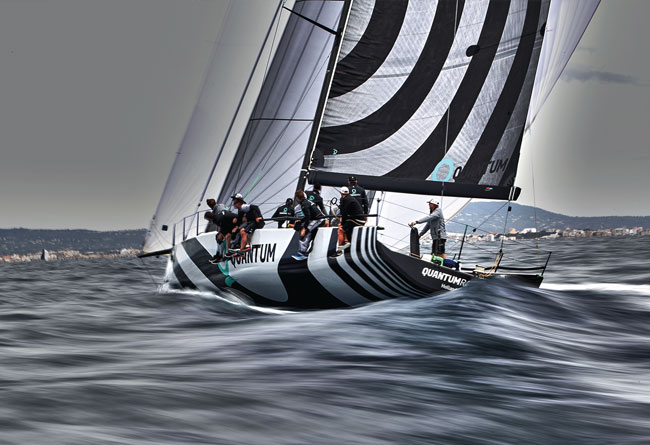 Ever since Ingo Buell’s routing system helped Jochen Schümann plot his route to Olympic victory in his Soling at the 1996 Games in Atlanta, Buell Software has been developing tactical technology to help sailors win.

As its name implies, SailTokyo is a system aimed at those looking to win gold at the next Olympics in Enoshima less than two years from now. Among its clients Buell Software can count the Olympic sailing teams of Belgium, Germany, Switzerland (and some larger sailing nations who prefer to keep their anonymity) along with the host nation of Japan, whose sailors surely know the venue better than anyone.

Yet SailTokyo’s application is much broader than Olympic sailing or the next Olympic venue.

For any race venue in the world, SailTokyo creates the means for sailors, coaches and support staff to build a clearer picture of what the current and the wind are doing, and how the two forces are interacting with each other.

The tool can be applied as much to the realms of big boat racing, and even the America’s Cup, as to the high-performance dinghy scene of the Olympic classes. And its scope is not just Tokyo but any racing venue in the world.

“We designed SailTokyo as a cloud-based team solution to prepare your sailing team for the Olympic Games – Tokyo 2020, Marseille 2024 – and all the World Sailing events and Olympic class world championships. But we have been delighted to see the software so well adopted and appreciated by other high-level sailors and race campaigns.”

In the Etchells 22 fleet, for example, SailTokyo has established itself as a must-have for the top performers such as Olympic silver medallist and multiple champion Steve Benjamin from the USA:

Indeed, Martin Hill’s winning team at the 2018 Brisbane Worlds also relied on SailTokyo to help plot their way around the racecourse.

Andrew ‘Dog’ Palfrey is one of the most sought-after coaches at the top end of the sport and has been using SailTokyo since the Dragon World Championships in La Rochelle three years ago. For him and his clients, running the routing software helps provide clarity and certainty when planning a strategy for an upcoming race.

“I guess everyone’s brain works in a different way, but for me the routing aspect of the software is very useful,’ he says. ‘We can all look at arrows overlaid on a chart, but can we really pinpoint which side’s favoured all the time? I can’t honestly say I could do that. Sometimes it’s obvious, you know, it’s shallow water over there, but a lot of the time the potential gains or losses across the course are quite subtle, yet they’re still important.

“When I’m running the software, I’m not too bothered about the result itself, but the result will certainly help quantify how important the current is on that day. When it’s start time and the pressure is on and you need to make clear decisions, just having that quantitative result logged in your mind is a real benefit.’

Grant Spanhake is another coach who numbers the TP52 Alegre amongst his high-profile clients.

“Last season in the TP52 fleet I got together with a few coaches for other campaigns – people like Tony Rey, Cameron Dunn, Timmy Haynes, John Cutler – and we ended up using the app on our phones and our iPads out on the water.

This iPhone review is about the new generation of Smartphones, which include the iPhone and its siblings the iPhone 3 and iPhone 4. The iPhone’s main selling point as a smartphone is its amazing user interface and the ease with which you can access and navigate its many applications. One of the biggest differences with the iPhone and other modern smartphones is its multi-touch screen, where you can swipe your finger across the screen to quickly find what you want to use. Find out more information on differences and similarities of modern smartphones on Gadgetsfind. Apple has also included in its latest range of Smartphones an operating system which has been designed by Apple and its engineering partner, the armory Technologies Ltd.

“We were all committed to make two, three or four current measurements in different areas across the racecourse and then all the collated data would appear on each of our iPads. It’s a great collaborative tool, because it meant that three or four boats could cover the whole racecourse very quickly.

“It gave us the ability to generate an accurate current field around the racecourse that we could all share. It gives the tacticians a lot more information to make their calls on which way to go, which is particularly useful in a complex venue like Cascais, which can feature some pretty strange current movements.”

While many racing teams are using SailTokyo as a predictor, others are deploying it as a post-race briefing tool. Data readings (currents, wind speeds and tracks) are logged by a yacht’s instruments or recorded by a coach boat following a dinghy around the course. These are then processed by SailTokyo, enabling coaches and racing crew to overlay their actual tracks and compare them with the theoretical best possible track on that course, in those exact conditions

James Lyne is another TP52 coach, in his case for Quantum Racing, although the new America’s Cup challenge, American Magic, is increasingly taking his attention. SailTokyo is forming an integral part of the Cup campaign, but Lyne is not at liberty to say exactly how.

“Some of the America’s Cup stuff that we’re doing with SailTokyo I’m not really going to talk about, but it has certainly been very useful for the Quantum Racing TP52 campaign over the past season.

“We’ve been using it as a predictor. Rather than just relying on our own memories and saying: Oh, remember that Tuesday in 2015 at Palma Vela? Today’s a synoptic day like that. As well as using our own experiences of a venue, we can now bring in SailTokyo and we can input the different models and run the boat up the course.

The ability to ‘crystal ball’ the day has started to make SailTokyo a must-have tool for Lyne and his sailing team.

As well as enabling teams to forecast the likely conditions for the day ahead, the latest version of SailTokyo also includes some very strong debriefing features, to help sailors and coaches see how – with the benefit of hindsight – they might have played the day differently.

SailTokyo processes readings of currents, wind and tracks. These data – measured on a sailing boat or by coach boats during the race – provide the backdrop for analyses of the theoretically best course. Tracks can be overlaid with this optimal course to gain a deep insight into where things went right and where they could have gone better.

One of the challenges for new users of SailTokyo is to grasp its full capability, but one of the best ways into the software is to find a particular feature that appeals to you and make it work for you until it becomes part of your routine.

The latest version of SailTokyo also includes some very strong debriefing features to help sailors and coaches see how – with the benefit of hindsight – they might have played the day differently. It’s about creating greater insight into where they went right, and where things could have gone better.

The debriefing element of SailTokyo makes it possible to:

– visualise the wind measured during the race (measured on sailing boat or accompanying coach boat)
– calculate dynamic fields of wind out of these data
– visualise the position of the boats plus their readings at any time
– have a correct picture of what the wind was like at any time of the race
– calculate what would have been the best course in this wind
– check the history of the wind in a strip chart
– visualise tracks from a race and compare these tracks versus the best course calculated.

James Lyne can recall his first encounter with SailTokyo during the build-up to the 2015 edition of the Melges 20 World Championships in San Francisco:

“We built our own polars and inputted those into the system. We were down on the Berkeley Circle where the current was doing two things, flooding in from the west but also making a big bend, out to the north. So it’s a big, effectively a right bend of current. This can make it hard to get your head around the whole cross-current aspect of the area.

“And I suppose that’s where we learned more than anything because we sort of didn’t believe the output to start with. And obviously with the Samba Pa Ti programme and the Wild Man programme, we had two boats, identical gear, world-class sailors and we spent quite a lot of time each day ‘ground-truthing’ the tidal prediction.

“In other words, if start time for the championship was at 1pm, then at 1pm each training day we’d have one boat go left up the course, one go right and we tested the course for a hundred days. We felt the need to do this validation, this groundtruthing process, because it was our first time using the software and it was predicting things that, when you look just at the tidal data, you wouldn’t think are correct.

“But the more we sailed there and tested it, the more we realised just how incredibly accurate were the deltas being predicted by SailTokyo.”

John Kilroy’s Samba Pa Ti would go on to win those Worlds comfortably while his 12-year-old son Liam would come third, just a point off second place, skippering Wild Man. There were many good reasons for the success of the programme, but Lyne says SailTokyo played a key role in giving the two crews great confidence in their strategic planning and decision making.

Just how Lyne and his cohorts at American Magic will be using SailTokyo to try to win the 2021 America’s Cup, we will perhaps have to wait a few years to see, however Lyne is very excited about the possibilities.

“Of course we could have developed our own in-house solution, but time is always the most precious resource and SailTokyo gives us a lot of what we need in a package that is very customisable. There was really little point in us spending time trying to do our own thing when we already have a great relationship with Buell. Ingo and Yvette have always been very open to new ideas and we enjoy working with them.”

Dynamic Grid Routing – the best short-course solution
Most routing software is based on isochronic routing. This works well for long-distance offshore racing but for shorter distances a different, more accurate tool is needed. Buell Software’s unique routing algorithm reflects the characteristics of Olympic and inshore races. This enables highly accurate calculation of best courses even over short distances such as we see on windward-leeward courses or any other inshore race course.