Skip to content
You are here
Home > LATEST > SailGP: Slingsby championship favourite after victory in Sydney 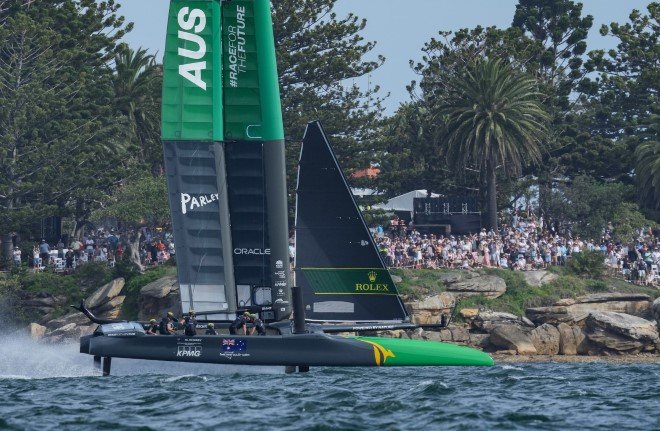 Tom Slingbsy delivered when it mattered for his Australia SailGP Team. Dominating the final race after an inconsistent weekend of results, the home team claimed victory in the Australia Sail Grand Prix presented by KPMG to secure its place in the Season 2 Grand Final in San Francisco, March 26-27.

Slingbsy finished ahead of a dogged performance from the man they call ‘The Pitbull’, two-time America’s Cup winner Jimmy Spithill, who led his United States team to second place and was left still searching for his first event win in SailGP. As a consolation, Spithill’s U.S. team officially secured its place in the Grand Final as a result of its performance in Australia this week.

Phil Robertson’s Spanish team were unable to recapture the magic of its day one performance, making the three-boat final but finishing a distant third, to all but end its chances of a Grand Final appearance in San Francisco.

The heartbreaking story of the day was Japan driver Nathan Outteridge’s heroic effort to claim both fleet races on day two. Outteridge recovered spectacularly from the drama on the opening day that saw the front of the Japan boat sliced clean off after a crash with Sir Ben Ainslie’s Great Britain team.

Having caused the incident, Ainslie gave up his own boat to ensure Japan could compete and the team hit Sydney Harbour with a hybrid boat that comprised the Great Britain hull and the Japan team’s 24 metre wingsail and hydrofoils.

But, the two race victories weren’t enough for Japan to make the final, and they missed out by a solitary point.

Great Britain’s withdrawal from the second day of racing meant the fleet was reduced to seven teams for the final day, but the top step on the podium once again belonged to Slingsby and his Australia team, as they claimed a fourth grand prix win out of the last five held.

Slingsby said: “I’m so proud of the people we have, from the shore team to the management, I’m a proud skipper and CEO, we didn’t make it easy for ourselves but the way we bounced back, what we did today, was unbelievable.”

Australia has now opened up a two point championship lead over the United States, with Japan four points adrift of top spot in third. Slingsby was thrilled to have booked his team’s place in the Grand Final in San Francisco.

Slingsby said: “We have absolutely got a target on our back now for sure, we have won four out of the last five races and we have a lot of confidence, we are only improving and for me it’s just particularly special to have secured this win at home in Australia.”

Making critical, tactical calls on board the Aussie boat was Olympian Nina Curtis who, as part of the Women’s Pathway Program (WPP), was racing onboard for just the second time.

Curtis said: “This has been one of the best days of my life. To be part of this in Sydney is amazing. The harbour was buzzing, there’s people on every foreshore, on anything that floats, all out there watching and I’ve never seen anything like this in sailing before and I think the whole city really put it on this weekend.”

Spithill was left still searching for his first SailGP event win, but can fully turn his attention to San Francisco now having secured his place in the Grand Final.

Spithill said: “It’s great, I mean for Tom, it’s his to lose now. It’s great to be the underdog going into San Francisco, trust me, that’s the great thing about sport, the favourites don’t always win. The Aussies are still the benchmark team, they just push harder, we still have work to do, we have bridged that gap to them a little bit but we need more.”

Outteridge was left rueing yesterday’s dramatic collision with the Great Britain boat that ultimately scuppered his chances of making the final race in Australia.

Outteridge said: “It feels like such a missed opportunity, I would have loved to have been in that final with Jimmy and Tom and see how we could have stacked up against each other in a three boat race, I guess we will all have to keep waiting for that. It says alot about Australian sailors that the top three championship teams are driven by Australians, we are dominating SailGP at the moment.”

Outteridge’s Japan boat won the first race of day two in dramatic circumstances as a flying start by Peter Burling’s New Zealand boat saw them lead from start to finish. But a penalty on the line for Burling meant Japan was handed the win. Japan streaked away in the second race to ensure they had done all they could to make the final, but it wasn’t to be and their first place ahead of Australia and New Zealand was in vain.

It was a disappointing weekend for the French team, who never finished higher than fifth across the five races in which they featured, and they remain in last place in the championship standings. Despite a spectacular flying finish in race five for Denmark – that thrilled the spectators on Sydney Harbour – it was also a weekend to forget for Nicolai Sehested and the Denmark SailGP Team presented by ROCKWOOL, as they failed to register a top three finish across the two days.

SailGP Season 2 will conclude with the United States Sail Grand Prix, including the championship-deciding Grand Final, on March 26 and 27, 2022. Tickets can be purchased online at SailGP.com/SanFrancisco.