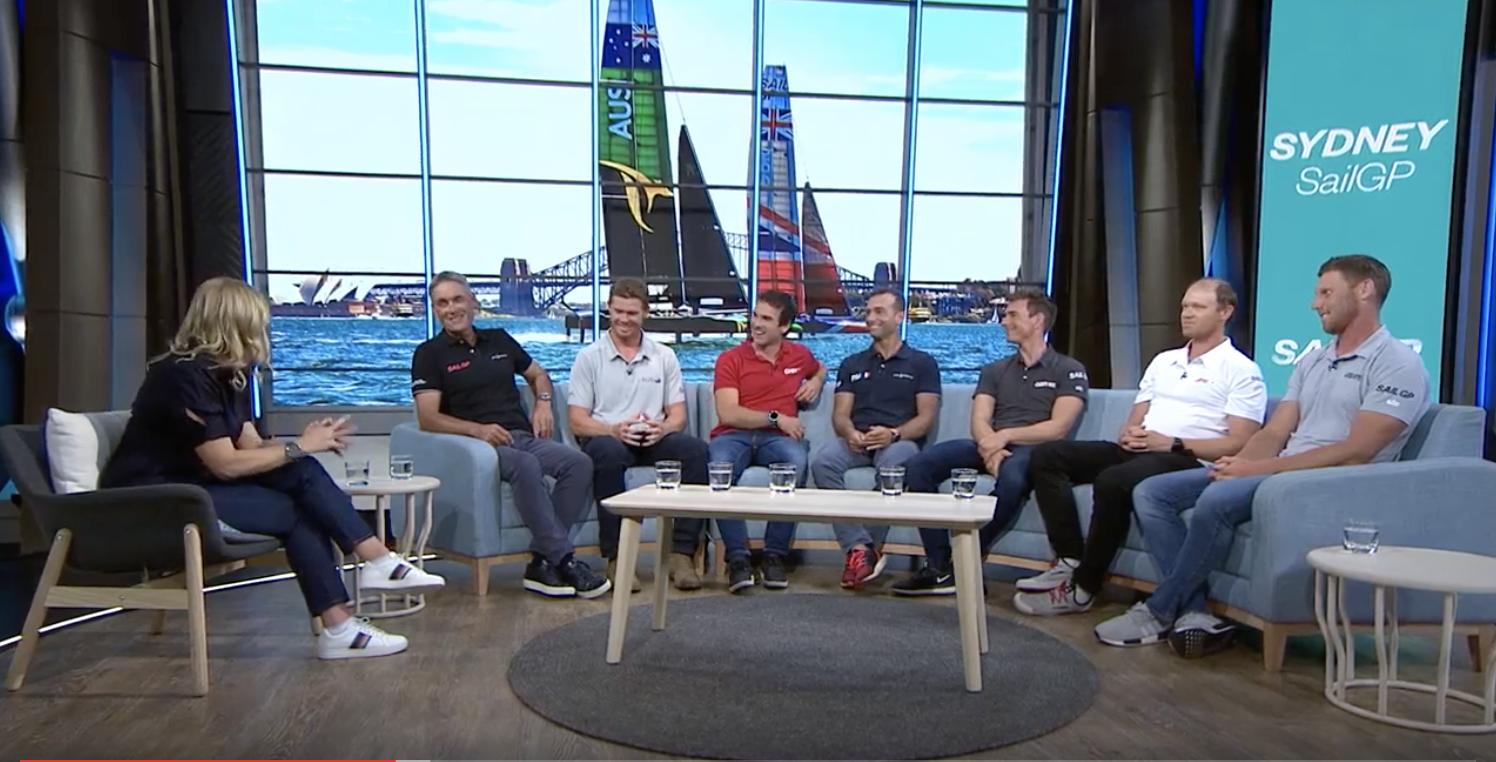 With less than a week to go before they will do battle for the first time ever next weekend on Sydney Harbour the skippers of the six international SailGP teams came together in a studio for 30 minutes of gentle questioning and friendly banter hosted by SailGP TV anchor Shirley Robertson.

The skippers of the six national teams – Tom Slingsby for Australia, Phil Robertson for China, Billy Besson for France, Dylan Fletcher for Great Britain, Nathan Outteridge for Japan, and Rome Kirby for the United States – were joined on the studio couch by New Zealand America’s Cup legend and SailGP SEO Russell Coutts.

All six confessed to some nerves at the prospect of racing together as a six-boat fleet for real for the first time on the turbocharged F50 cats which are reputedly capable of 50 knot plus top speeds – particularly on the confines of Sydney Harbour.

Sydney local Slingsby who can see the racecourse area from his nearby house admitted that he and his team were feeling some extra pressure from being the home team for the season opening event.

“There is a bit of pressure there for us,” Slingsby said. “We want to start this circuit on the right foot with a nice result and for me personally this is a lifelong dream. I’m representing Australia with an all-Australian team on a green and gold boat.

“[These are] the fastest boats in the world and I want to perform well on the world stage and so do all our team. So yes, there is a bit of pressure, but we are all ready for it.”

Although Slingsby has racked up plenty of hours aboard the F50 catamaran in its original guise as the AC50 during his time with Oracle team USA in the last America’s Cup, the skipper with the most helming experience is fellow-Australian Nathan Outteridge.

Outteridge, who was also involved with the recent sea-trialling and development of the boats, describes them as “really technical to sail”.

“There’s a lot of control systems and software [onboard] and we have a good package now,” Outteridge told Robertson on the show.

“The boats are super-fast which is what everyone talks about but the amount of control that we have over the boats [now] is incredible. You can really put the throttle down and go really fast with a lot of control and be safe.

“[The remarkable thing] is how they can harness so much power in so little wind. You can be out there doing three times the windspeed very easily, and you can spin it on a dime and be go off and [immediately] do 40 knots the other way.

“The racing is going to be super-dynamic and there is going to be big gains and losses. The boats are going to be very rewarding if you sail them well. It’s going to be a challenge to keep the boats in the boundaries and avoid each other and I think that’s half the fun of it.”

Watching the show it’s clear to see that the other skippers view Outteridge as the man to beat. Although he tries to play this down throughout the show his confident answers and body language contradict any such attempts.
“I wouldn’t say I’m confident because there is a lot of talent in the line-up of people here and a lot of experience amongst all the teams,” he says.

“But there’s a bit of confidence from the experience I’ve had driving these boats. Being involved in the development of how the boats have got to where they are today means you can leapfrog a bit of the initial learning.

“But I’m pretty certain that these guys will work it out pretty quickly and by the time we start racing it’s going to be tight.”

Coutts – clearly enjoying the role of agent provocateur – responds quickly: “That’s a PR answer! He told me earlier that he was confident.”

Kiwi Phil Robertson – skipper of the China team – piles on too: “I’ve spoken to the other guys and we are going to chain his boat to the dock for the rest of the week, so there’s no more practicing.”

American Rome Kirby is skipper of the US crew – the youngest on the circuit – makes a repeated point that he and his crew will are taking a cautious approach and taking each day as it comes.

Asked about the incredible speeds of the boats he confesses to a near-miss situation between the American and French boats during a training session in Sydney.

“The closing speeds for sure are pretty fast,” Kirby says. “We had a little moment with the French when we didn’t quite see them, and we missed them probably by just a few feet. It happens pretty quick – the speed of the game is pretty fast.”

This is followed by a knowing look between Kirby and French skipper Billy Besson, accompanied by some nervous laughter among the other skippers. However the story also triggers a more serious discussion about safety led by Robertson.

“It’s no joke,” he says. “The boats go extremely fast, and with speed comes danger. That’s a priority now: making sure the boats are safe and the crews are safe on board.”

Robertson goes on to describe some of the key learnings from a mandatory practical safety/sea survival course all the teams were required to take part in.

“We had quite a few professional divers with us teaching us how to be calm under water if worse case scenario the boat goes upside down and you are stuck,” he said. “On board we wear … an impact vest and on that vest is an air tank that gives us a bit of air. It gives us one minute if we are panicking and three minutes if we calm ourselves down.

“Alongside that we have got divers on our ribs to jump in the water and get us out if it all goes a bit pear shaped.”

Coutts also weighs in with his comments on safety.

“One of the things that’s been introduced is that they are all harnessed on,” he says. “If they did have a collision with another boat – or pitchpoled it – they are at least locked on to the boat and not going to go flying through the air and hit something, [like] perhaps the back of [one of] the dagger boards, which is like a knife edge.

“There’s lots of little details like that with regards to the safety which have gone into the planning just to make sure we are as safe as possible.”

Perhaps the most interesting section of the show was Outteridge’s description of the crew coordination that is required amongst the aft three sailors – flight controller, wing trimmer, and helmsman – to get the flying cats around the racecourse without crashing.

“You have got one driving the boat, another person controlling the power source of the wing, and then the flight controller is involved in flying the boat,” Outteridge explains.

“We have our boat set up so that I’m flying the boat on the twist grips [on the steering wheels] at the back, but whenever you do a manoeuvre all three of you have to be very in synch as to who is pushing what button when to keep it in the air.

“It’s not easy – sometimes we make it look very easy – but it really is not easy to do and it takes a lot of time to get the relationship right between those three people.

Slingsby agrees and explains what happens when things go wrong.

“Communication is so important,” he says. “We have got onboard comms units and with all the noise around us if someone doesn’t hear one of your instructions, then it’s pretty bad. You get wet – and get wet fast. You crash the boat into the water, and you try not to damage the boat or the people.”

It will come as no surprise to anyone that all the skippers agree that the start is going to be the most important element of the racing to get right. Passing lanes are going to be few and far between and clear air and an unobstructed racecourse ahead at the first turning mark is the goal for all the teams.

“If you get the best start you lead to the first mark and you have no one in front of you and no one really blocking you,” Slingsby explains. “If you get caught in the pack in the middle of the fleet, everyone is trying to slow each other down and drag each other back.

“Much like in F1 if that guy nails pole position and gets around the corner first, he’s hard to catch. It’s going to be very similar in these boats too. It’s going to be super important to get off the line clean and to mark one in good shape.

Asked about the competitive spirit among the six crews Robertson predicts that the atmosphere will be at fever pitch when racing gets underway for the very first-time next Friday in Sydney.

“You have got six really competitive human beings here and once that first gun goes I’m not sure we are all going to have a beer together ever again,” Robertson. “It’s going to be all on. We are all mates right now, but I know what’s going to happen …. I wouldn’t be surprised if there are punch ups in the yard afterwards.”

Whether any such shenanigans and score settling will also be streamed live remains unclear at this stage, although Coutts for one seemed keen for that to be the case.

Racing at the SailGP inaugural regatta on Sydney Harbour is scheduled to begin on Friday February 16. More details of how to watch live coverage here.