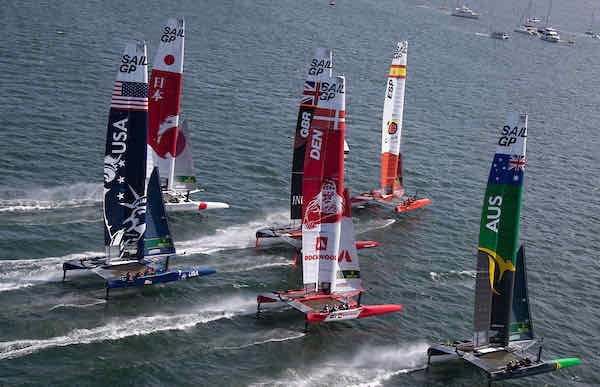 SailGP returns this weekend for its second season with an upgraded fleet of boats and a significantly beefed-up sailor line-up that includes many of the top names from the 36th America’s Cup.

Racing will once again take place using matched high-performance F50 catamarans that originated in the 35th America’s Cup as AC50s. New for Season 2 is a smaller 18 metre high wing sail with less power and less drag which should make the boats more manageable and ultimately faster in stronger winds.

The format for the series’ eight two-day regattas is five fleet races followed by a single match race final  between the two top teams. The season ends with the Grand Final, which includes the Championship Final Race – a winner-takes-all match race for a $1millon prize.

The big news over the last few months has been Jimmy Spithill’s appointment as CEO and helmsman of the United States team, and that Peter Burling and Blair Tuke’s will lead New Zealand’s first sortie into SailGP.

These three behemoths of the sailing world join Australian skipper Tom Slingsby, an Olympic gold medallist and America’s Cup winner, as well as Britain’s Ben Ainslie, the world’s most successful Olympic sailor and skipper of the Ineos Team UK British America’s Cup challenger in the 36th America’s Cup, and Australian Nathan Outteridge who leads the Japanese team that finished second in Season 1.

The three remaining teams – France, led by French Olympian Billy Besson, Denmark, led by top flight match racer and around-the-world racer Nicolai Sehested, and Spain, led initially by experienced Kiwi skipper Phil Robertson – may not command as many headlines as the big-name teams, but they are also far from there to make up the numbers.

While the young Spanish squad will no doubt need time to acclimatise in their first season, the French and the Dames should be capable of winning races and both will be keen to steal some of the media limelight from the top tier teams this season.

Here’s a snapshot of each of the teams’ line-ups for Season 2. Bear in mind that the Season 2 nationality rules require

Leading the Season 1 championship-winning Australian team once again is Olympic gold-medallist and America’s Cup winner Tom Slingsby who has stuck with the same core crew as last season to help him try to defend his title.

Danish skipper Nicolai Sehested has stuck with an unchanged line-up from the team’s one and only SailGP competitive outing at the now-voided January 2020 event in Sydney, Australia. That means Rasmus Kostner returns as flight controller, around the world racer, America’s Cup campaigner, and past US SailGP team member Tom Johnson is back as wing trimmer, and Olympic gold medallist Martin Kirketerp once again leads a powerhouse grinding team that includes Danish brothers Hans-Christian and Lars-Peter Rosendahl.

As newcomers to the F50 cat in SailGP Season 1 the French team unsurprisingly did not get anywhere close to the podium during the year. This time though the team’s skipper, Olympian and multiple Nacra 17 world champion Billy Besson is hoping for much better.

He was quick to bag experienced campaign boss Bruno Dubois from the defunct Chinese team and has recruited Ineos Team UK flight controller Leigh McMillan as wing trimmer. Completing the ‘speed loop’ at the back of the boat is French multihull specialist Francois Morvan who moves up into a sailing role after working in the onshore performance monitoring team last season.

Despite having only competed once on the SailGP circuit Sir Ben Ainslie’s British squad will go into Season 2 among the favourites. They turned in a stunning performance to win the now retrospectively cancelled Sydney regatta in January 2020 that should have been the beginning of Season 2. Ainslie and Co. clocked up four consecutive race wins and went on to defeat the Australians in the match racing final.

No surprise then Ainslie has stuck with the same line-up for the Season 2 opener in Bermuda. Alongside Ainslie at the helm, Australian Iain Jensen returns as wing trimmer, with dual national Australian/Brit Luke Parkinson as flight controller. The all-British grinding team is made up of Neil Hunter, Matt Gotrel, and Richard Mason – all Ineos Team UK 36th America’s Cup campaigners.

After having had to sit out the 36th America’s Cup – albeit from the perfect vantage point in the commentary booth – Nathan Outteridge must surely be champing at the bit to get back into the cut and thrust of competition. Last season he largely played second fiddle to Tom Slingsby’s Australian outfit but this time around he has brought in some heavy hitters at the back of the boat to help him mount a challenge for the overall title.

Fresh from his co-helmsman role with Luna Rossa Prada Pirelli at the 36th America’s Cup Francesco Bruni – who must surely be eying his own Italian SailGP syndicate at some point – comes in as flight controller. Also joining for Season 2 is British Olympic silver medallist and multiple America’s Cup campaigner Chris Draper who comes in as wing trimmer. Bruni and Draper last sailed together with Luan Rossa at the 34th America’s Cup when Draper drove, and Bruni called tactics.

According to the team’s website Japanese sailor Leo Takahashi will make the move from grinder to flight controller (presumably mentored in some way by Bruni), while the all-Japanese grinding team will comprise regular Yuki Kasatani, and Tim Morishima – who moves up from his role in the shore team last season.

No international sailing competition can credibly claim to have the best sailors in the world without the New Zealand wunderkind pairing of Peter Burling and Blair Tuke. Olympic silver and gold medal winners in the 49er and two-time America’s Cup winners (in addition to multiple European and world titles), Burling and Tuke have been virtually unstoppable in the last 10 years and their arrival in SailGP is a mouth-watering prospect.

Aside from specifying Burling as helmsman and Tuke as flight controller the team website does not clarify the roles of the other sailors which include Emirates Team New Zealand trio Josh Junior, Andy Maloney, and Louis Sinclair, plus Marcus Hansen.

The team – which reportedly has the youngest average age on the circuit – has brought in the highly regarded double Olympic medallist and around the world race and America’s Cup veteran Xabi Fernandez as coach.

After a lacklustre performance in Season 1 the American outfit has been dramatically overhauled following the arrival of two-time America’s Cup winner Jimmy Spithill as CEO and helmsman.

Only American Rome Kirby remains from the original line-up and he will act as flight controller, while Britain’s Paul Campbell-James moves over from coaching the Spanish team to manage the wing trim on the US boat. The grinding team comprises three past-NYYC American Magic sailors: Andrew Campbell, Cooper Dressler, and Alex Sinclair.