Skip to content
You are here
Home > Recommended > SailGP: Rob Kothe assess the teams ahead of Season 2 opener 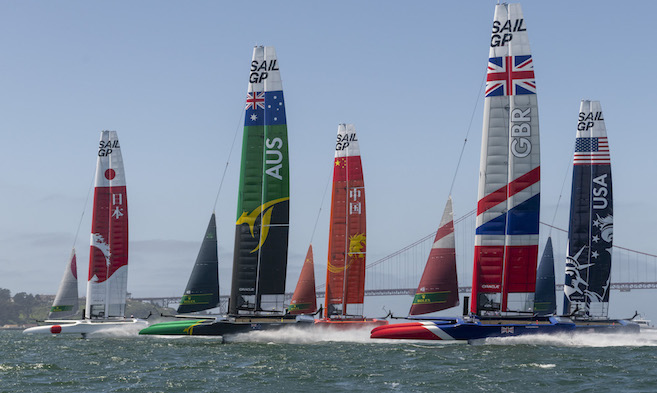 It was a giant offseason for the SailGP circuit. Two new teams Denmark and Spain were launched while Team China sailed away.

A year ago, CEO Sir Russell Coutts predicted that within a few years there would be ten teams sailing in SailGP international events each year. Now there are seven teams, and boat eight is half-built, and a new team announcement may not be far away.

Across the first year, Coutts talked often about the attractiveness of a regular international circuit, of national sailing teams, with high visibility venues, sailed in high-performance boats in a made for television format, serious players in the entertainment industry have been watching closely.

The hard reality is that while sailing aficionados wax lyrical over the America’s Cup, it’s too little sailing too infrequently for mainstream sports fans and hence media.

So, the announcement in late January 2020, that a minority shareholding in SailGP, has been taken by Endeavor, the Hollywood based global sports, entertainment and content company, has forced a reevaluation of the SailGP circuit within the professional sailing community.

The value of this shareholding delivers a notional valuation of the whole enterprise at an impressive US$ 200 million dollars.

One of the Endeavor divisions is the highly regarded International Management Group and its involvement before the start of the second season of racing in SailGP is a significant development.

Endeavour involvement should make it easier for the SailGP teams and SailGP itself to attract sponsors.

One of the team still looking for sponsors is Tom Slingsby’s Australia SailGP Team. They claimed the first season’s US$1 million-dollar championship prize in Marseille last September and now they are keen to win again in season two, but it’s shaping as a tough ask.

The Australian SailGP Team stacked full of America’s Cup talent with will be unchanged from the first season.

Slingsby said yesterday ‘The competition is definitely stronger. Team Japan pushed us hard in season. They went very close to beating us in that final race.

‘Training has been excellent so far. The level of the fleet has improved a lot with the whole fleet showing the ability to go around the track without touching down.

‘With Team INEOS UK now taking over Team GBR, GBR might have the best team on paper drawn from Ben Ainslie’s full-time America’s Cup squad, but we will beat him. Our strength last season was just how well we worked as a team under pressure in some very tough conditions.’

The Great Britain SailGP Team, presented by INEOS, has five of the six members currently sailing together as part of INEOS TEAM UK’s America’s Cup challenge.

Ben Ainslie will helm the F50 after years sailing the AC50 and with a solid week of Sydney practice and with the hugely experienced Iain’ Goobs’ Jensen and Luke’ Parko’ Parkinson, respectively wing trimmer and flight controller on Team Japan in season one, expect him to be up on Slingsby’s hip in no time.
Ainslie has watched all the season 1 races, will have noted Outteridge’s foiling Moth style fast start from out the back – reliance on time on distance.

‘We are really looking forward to SailGP,’ Ainslie says. ‘The F50’s performance is fantastic, changes from last season to this with the new wing being able to sail in bigger wind range is a really smart move,

‘The SailGP calendar meshes very well with the Americas Cup program. It provides a great opportunity to get out there and do some ferocious competitive racing in similarly high-performance boats.

‘The one tight spot is between Cagliari and SailGP San Francisco where Chris Draper and his shore side group will commission the wing sail ahead of us coming in from Italy.’

However, for SailGP Team Japan, with the loss of that talented duo, there are tougher times ahead.

While they had a strong season one, they just missed out on the million-dollar first season jackpot, by a couple of seconds, but the Japan SailGP Team has new line-up for SailGP Season 2 in 2020.

Under the SailGP nationality rule for Season 2, 60 per cent of the team must be Japanese up from 40 per cent in season one.

Nathan Outteridge remains at the helm. Leo Takahashi has moved from grinder/jib trimmer to flight controller replacing Parkinson. A busy season for the Japanese sailor as he is campaigning for the Tokyo 2020 Games in the 49er class.

Another Australian Ayden Menzies replaces Jensen as wing trimmer. Hardly a neophyte, a former Youth World Champion, He worked with SailGP during the sea trials of the boats in 2018, and as a member of Japan’s shore team, he ran the wing program in Season 1.

Outteridge: ‘We were training up Leo during season 1, that was always the plan. The big shock was to realise we’d be sailing against Goobs and Parko in season 2, that was something we never expected.

‘Our training has been going well. Making steady progress with the new guys. Only three days under the belt so far in light winds. Still, a long way to go, but we want to be amongst the leaders at the top mark in the first race, along with Australia and Great Britain and we will get stronger and stronger as the season progresses.’

Nacra 17 sailor Florian Trittel is the wing trimmer on the F50. He too is expected to represent Spain in the Olympics this year. In the flight controller position will be 2016 Olympian Diego Botín, who hopes to be selected for Spain in Tokyo in the 49er class.

Robertson reports: ‘Practice has been going well. We have had a big week out here and maximising our time. The boys are focused and know we have a long way to go to get competitive. Racing is going to be a big step up for the team and something we haven’t experienced yet.’

‘For the less experienced teams, the first year was tough. It took half the season to master the wing sail. ‘Now we have the new wing sail, it’s almost plug and play in terms of trim, and that is making it easier.

‘Is it faster? I will tell you next Saturday night.’

Team USA had a frustrating season one skipper Rome Kirby says, ‘Going into Marseille in third place, and then to end the season in fifth place was incredibly tough.’

‘But we are all fighters, and immediately our focus turned to Season 2 success.’

Kirby says, ‘We have unfinished business. All the hard work we’ve put in during the off-season is about to pay off.’

Although they finished sixth overall in season 1 SailGP Team France won the final fleet race of Season 1 in Marseille and are looking to build on that in season two.

Dubois led Team France in the 35th America’s Cup and managed the Franco-Chinese Dongfeng Race Team in two iterations of the Volvo Ocean, including the team’s winning 2017/18 campaign.

Besson said earlier: ‘Last year was about discovery, now we are more confident and ready to attack’

The Danish team is stacked with Olympic and multihull talent however the only member of the Danish team who has raced the F50 before is wing trimmer Tom Johnson, who switched from Team USA.

Sehested said yesterday ‘We have been sailing for four days, with a steep learning curve as expected, but we are starting to put in some good sailing, we are close to being competitive, and we still have three more days of practice.’

‘We are realistic. We only have 15 hours in this boat. So, we are not expecting to be competing for the podium in this event, but we want to be in there for some close racing, and if we take some points here and there, that will be good.’

‘Sydney is an awesome venue, it’s a very cool racecourse. It’s a hard racecourse with a lot of spectator boats, and land and buildings and not much space, so it’s shifty and puffy. But that just makes it exciting racing to watch, with lots of lead changes.’

Indeed, exciting racing is expected, Ben Ainslie labels SailGP racing as ‘ferocious’, and so it will be.

While there are five days to go, Predict Wind’s four weather models are showing speeds of 9-16 knots during afternoon racing, on Saturday up to 17 knots, tho there could be some light patches on both days, just depends on the timing of weather systems.

Tickets are available at SailGP.com/Sydney. After Sydney, SailGP returns to San Francisco (May 2-3) and New York (June 12-13), ahead of the first European event of the year in Cowes on the Isle of Wight (August 14-15) before heading to Copenhagen for the first time in September (11-12).

The remainder of the schedule will be announced in February. It could be that is the end of the season, but Marseille might still be in the mix.

The Sydney event will be viewable on Sky Sports both live from 5 am Friday GMT, 6 am CET also on Facebook and YouTube.