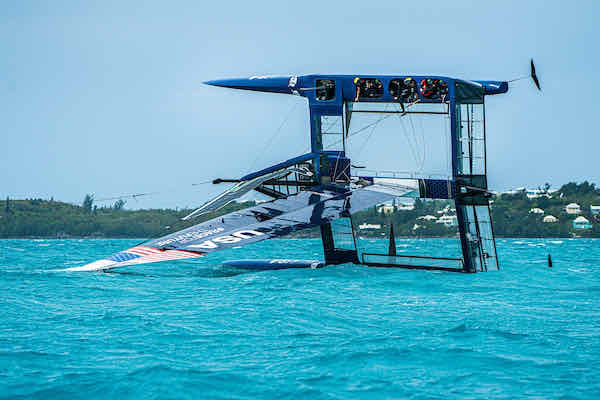 Slingsby said there were only minor injuries and the boat was quickly righted before being towed back to base on Bermuda’s Great Sound on Friday.

The US team’s Australian skipper Jimmy Spithill said there was enough damage that the high-tech boat could be out of action for a few days.

The Australians were using the US boat because their catamaran was still being set up for the regatta on April 24-25 that will open the pandemic-delayed second season.

Spithill said the plan all along was for teams to share boats until the entire eight-boat fleet is on the water.

“Obviously it’s not ideal capsizing and damaging someone else’s boat but he understands how it is,” Slingsby said.

“I think we owe him a few alcoholic presents and thank yous, but we’re going to be over there helping wherever needed and also to get their boat on the water as quick as possible.”

“Until our boat’s ready to go, we’ll obviously be borrowing the Australian boat.

“I’m looking forward to having a go on the Australian boat.”

Slingsby said the Aussies were on the first lap of their first official session in more than a year when the boat capsized while travelling at about 43 knots (80 kilometres per hour) in winds of about 24 knots (45 km/h).

“I guess this capsize shows how important it is for us to get out there and do some training before the event starts,” Slingsby said in a phone interview.

“Especially after a 14-month layoff, we’re all going to make mistakes.”

While some of the crews have come straight from the America’s Cup in New Zealand, Slingsby said his crew has been relatively isolated in Australia due to the coronavirus pandemic and hasn’t been able to do any racing.

He skippered his crew to the inaugural championship in 2019 and the $1 million, winner-take-all prize.

Spithill said “the boats are a handful” in the top end of the wind range.

“That proved it. Those guys are the defending champions so for them to go over meant it must have been pretty tough,” he said.

Spithill said he wouldn’t be surprised to see more than one capsize between now and the end of the regatta.

Britain’s Sir Ben Ainslie won the opening regatta of the second season in Sydney in February 2020, but those results were voided when the rest of the season was postponed due to the pandemic.