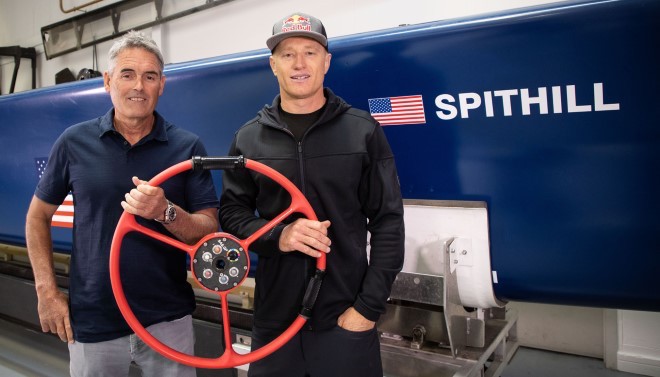 SailGP has announced that two-time America’s Cup winner Jimmy Spithill has signed on to take over as CEO and helmsman of the United States SailGP Team for the coming 2021 season.

Spithill – who is currently helmsman with the Italian America’s Cup Challenger Luna Rossa Prada Pirelli Team – will lead the U.S. team as it fights to claim the sport’s largest monetary prize of US$1 million when the global league returns for the start of its second season, April 24-25, 2021, at the Bermuda Grand Prix presented by Hamilton Princess.

Rome Kirby, who previously led the team from inception as helm, will shift to the flight controller position, making the U.S. the only team to have a former F50 helm flying the boat. The remainder of the U.S. team roster will be announced in the coming months.

Spithill is widely regarded as one of the sport’s top athletes in high-performance racing, having spent the last two decades competing in the America’s Cup. He served as skipper of ORACLE TEAM USA for more than 10 years, during which time he delivered two America’s Cup wins, including a dramatic come-from-behind victory in San Francisco in 2013, widely acclaimed as one of the greatest comebacks in sports history.

“We couldn’t be more excited to have not only an amazing sailor, but also one of the greatest competitors, join SailGP,” said SailGP CEO Sir Russell Coutts. “Jimmy brings a massive amount of experience and skill to the U.S. team and even further cements our position as the sport’s pinnacle league.

“Make no mistake – we have the best sailors in the world competing in the most exciting format. We’ll have eight incredibly competitive teams, each racing in identical, high-speed foiling catamarans in nine different countries around the world. Season 1 produced some great racing, and Season 2 will take this to a whole new level. It’s shaping up to be some of the most thrilling racing the sport has ever seen.”

Spithill is the latest high-profile signee for SailGP, joining Season 1 frontrunners and Olympic champions Tom Slingsby (AUS) and Nathan Outteridge (JPN), as well as 2020 additions Sir Ben Ainslie (GBR/four-time Olympic champion), and Peter Burling and Blair Tuke (NZL/Olympic and America’s Cup champions). There are four Olympic champions among the league’s eight helms, who have combined for 10 medals in 14 Olympic appearances.

Spithill said: “It’s obvious that SailGP is one of the pinnacle events in our sport that combines cutting-edge technology with exciting, dynamic racing in iconic venues spread around the world. As a competitor, an annual championship that draws in the world’s best professional sailors is where you want to be. I am extremely honoured to have the opportunity to represent the United States once again.”

Spithill and Kirby will be no strangers to appearing in the same starting lineup – both were former teammates on Oracle Team USA for more than seven years – a dynamic sure to play to the team’s competitive advantage. That ambition, coupled with a renewed purpose to create a legacy for U.S. sailing, is what motivates Spithill as he looks toward his inaugural SailGP season.

“Rome and I both have great respect for one another having been teammates for many years,” Spithill said. “I’m excited to be building an American team that is able to compete with and win against the best of the best both now and for years to come.

“Our first step is to create a winning team and we will use that as a catalyst to re-energise sailing in the US. Having raced under the American flag for a significant part of my professional career, this opportunity is – for me – all about creating a pathway that allows us to identify, develop and train the best U.S. talent going forward.”

Additional updates from the United States SailGP Team will be announced after the first of the year. The team is currently slated to begin pre-season training in April 2021 on Bermuda’s Great Sound prior to the start of SailGP Season 2 at the Bermuda Grand Prix presented by Hamilton Princess (April 24-25).

Following the opener, the global championship will then travel to Taranto, Italy (June 5-6); Plymouth, UK (July 17-18); and Aarhus, Denmark (August 20-21), with four additional events yet to be announced that will be staged prior to the Season 2 Grand Final at the United States Grand Prix in San Francisco in April 2022.