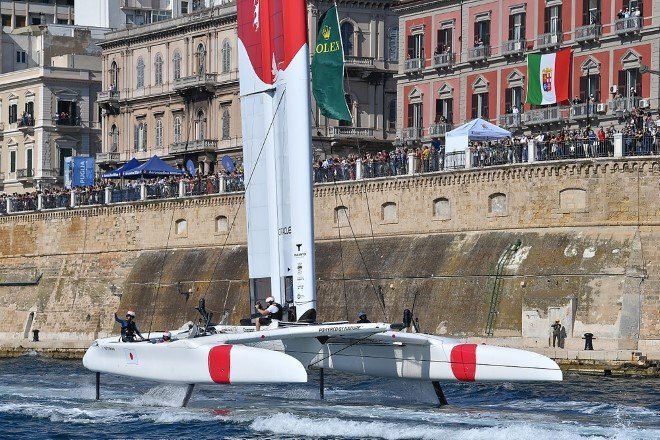 Nathan Outteridge’s Japan SailGP Team has won the Italian leg of the 2021-22 SailGP international circuit after winning the final podium race of the weekend in Taranto.

SailGP fans were out in full force – with sellout crowds on-shore and nearly one thousand registered boats lining the racecourse – to enjoy the second and final day of the Italy Sail Grand Prix in Taranto.

Spain finished in second place in front of Jimmy Spithill’s U.S team to move to the top of the SailGP Championship leaderboard following the opening two events of the season.

Overcoming disappointment in Bermuda, Outteridge drove his team straight into the weekend’s podium race with bold ambition. After an intense battle with Phil Robertson’s Spanish team and an on form U.S. team – the latter being forced to pull out of the final race with a broken rudder – Japan claimed the win at the first ever Italy Sail Grand Prix.

Outteridge said: “It’s really nice to win here. We knew that the result in Bermuda didn’t reflect our performance and obviously that was unfortunate. We sailed really well all the time here and it’s just been fantastic to have Francesco onboard – not just on the boat but the chase boat as well helping us with coaching – so to deliver a home win for him is just fantastic.

“I heard that we are now up to third overall and you wouldn’t have thought that would be the case after the event in Bermuda. We’ve only done two events this year so there’s plenty more to come. We’re really happy with the performance and are looking to improve even more for the next event.”

Downsizing the crew between the fleet races and the final podium race to three athletes due to the light winds meant Japan team flight controller Bruni would be repositioned onto the chase boat, but the epic win in Bruni’s home country in front of cheering crowds was a fairytale ending to an incredible weekend.

Bruni said: “It’s been an incredible event. We are super happy, it couldn’t get any better! We deserved some luck in the last race. I think we all sailed very well during the week, especially Nathan, Chris [Draper], and Tim [Morishima]. It’s really a prize for how good we sailed all week.

“It’s been unbelievable to see so many people on the water, and along the shore watching and cheering, especially for us, for me, and for the whole event. It’s been a great success.”

The Japan team now sit third on the season championship leaderboard with 14 points, with fellow finalists Spain moving into first place. Great Britain, winners of the Bermuda Sail Grand Prix presented by Hamilton Princess, are in second place despite a disappointing sixth-placed finish in Taranto under interim driver Paul Goodison.

Sunday’s two fleet races were won by New Zealand and Japan respectively – the debut race win for Season 2 newcomers New Zealand with Arnaud Psarofaghis in the driving seat for the first time, while Peter Burling and Blair Tuke embark on defending their Olympic title.

Rounding out the event standings were New Zealand in fourth, Denmark in fifth, Great Britain in sixth, France – who made the podium in Bermuda – placed seventh, and Australia taking eighth spot.

SailGP CEO Russell Coutts said: “Taranto has been a spectacular venue to host our second event in SailGP Season 2. The city has really embraced SailGP and it has been fantastic to see the crowds turn out every day to support the teams – on and off the water – and in particular Francesco Bruni and the Japan SailGP Team, who I must congratulate on a fantastic win here this weekend.”

SailGP takes to the waters of Plymouth, U.K on July 17-18 as the third event on the global league’s championship calendar. Fans can look forward to additional events in Aarhus, Denmark (August 20-21), Saint-Tropez, France (September 11-12), Cadiz, Spain (October 9-10) to finish off 2021. Racing returns in the new year starting in Christchurch, New Zealand (January 29-30), and the Grand Final in San Francisco, U.S. (March 2-27).