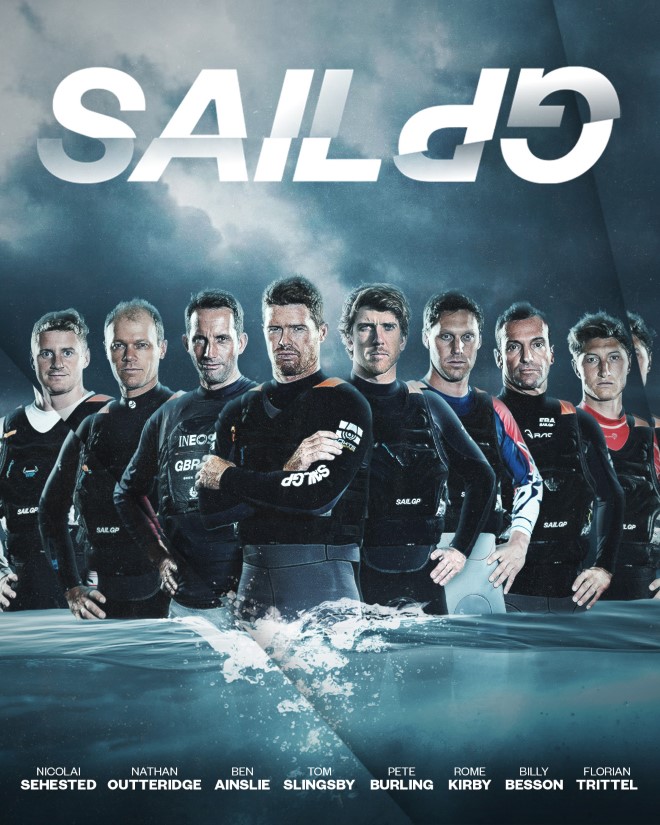 The much-anticipated blockbuster, starring John David Washington, Robert Pattinson, Elizabeth Debicki, Michael Caine and Kenneth Branagh, was filmed across the world in seven locations – including Southampton, UK – and when the script required an epic sailing scene, SailGP answered the call.

Following Cowes SailGP in August 2019, two F50s – the Japan and U.S. boats – were rebranded exclusively for the Hollywood movie and SailGP’s world-class athletes took part in the filming, although it will be a struggle to spot them thanks to the magic of cinematography.

U.S SailGP helm Rome Kirby and SailGP Season 1 champion Tom Slingsby of the Australia team were two of the athletes involved and spent a week at the helm of the F50s – one white and one blue – setting up dramatic, boat-on-boat scenes in the Solent, under the watchful eye of Nolan from a helicopter.

Famed for his directing roles in Inception, Dunkirk and The Dark Knight Trilogy, no stone was left unturned to get the epic shots required in the script, although the plot was a closely guarded secret.

“When news reached us that SailGP would be featured in a Hollywood movie, everyone wanted to be involved,” said Slingsby. “It was one of those things you hear and think that it would be cool but would never happen. It was amazing to get a little insight into Hollywood and it was a fun project to be part of. I can’t wait to see the movie.

“But, the best thing for me is that people will see for the first time the F50s in full flight on the big screen and that will bring a completely new audience to SailGP. Hopefully it will change people’s perception of the sport and they will come and see us in real life – the real racing is as good as any Hollywood movie.”

While SailGP is certainly a logistical feat involving national teams from around the world, multiple global events and the world’s top athletes – the Hollywood production was another level. Based out of Southampton docks, the filming involved multiple helicopters, chase boats, hi-tech camera boats, IMAX cameras, production staff and a team of hair and make-up, which Kirby got to experience first-hand.

“In the script, the white boat was helmed by the character played by Debicki,” explained Kirby. “In the real world, very few people are equipped to handle an F50 and while Debicki already had a stunt double – who had more than a passing resemblance to the Australian actress – even in a blonde wig, I didn’t really cut it as Hollywood leading lady.

“It was amazing to be a part of. We shot scene after scene, scenario after scenario trying to get as close to each other as possible. We didn’t know how the pieces fit together or where it would feature in the movie, but I think it will be a pretty prominent scene.”

SailGP CEO Sir Russell Coutts said: “It was a privilege to be approached to feature in the movie and testament to our incredible boats that as soon as they had a vision for cutting-edge race boats, we got a call.

“The exciting thing is that so many more people around the globe will get to witness the speeds and dramatic nature of these incredible flying machines and hopefully they will come and see us in the flesh when SailGP gets underway again in April 2021.”

SailGP Season 2 will restart in San Francisco and New York in April and June of next year. Following the U.S. leg of the championship, grand prix events will take place in each of the European team markets: the UK, Denmark, France and Spain. The league plans to hold 7-9 events as part of Season 2, and will feature racing in the Australia/New Zealand region in the early part of 2022.

SailGP will debut in Tenet, out August 26. Full details and exclusive behind the scenes content plus the story of the filming can be found at SailGP.com/hollywoodpremiere.