Skip to content
You are here
Home > SailGP > SailGP: Formula 1 for growth 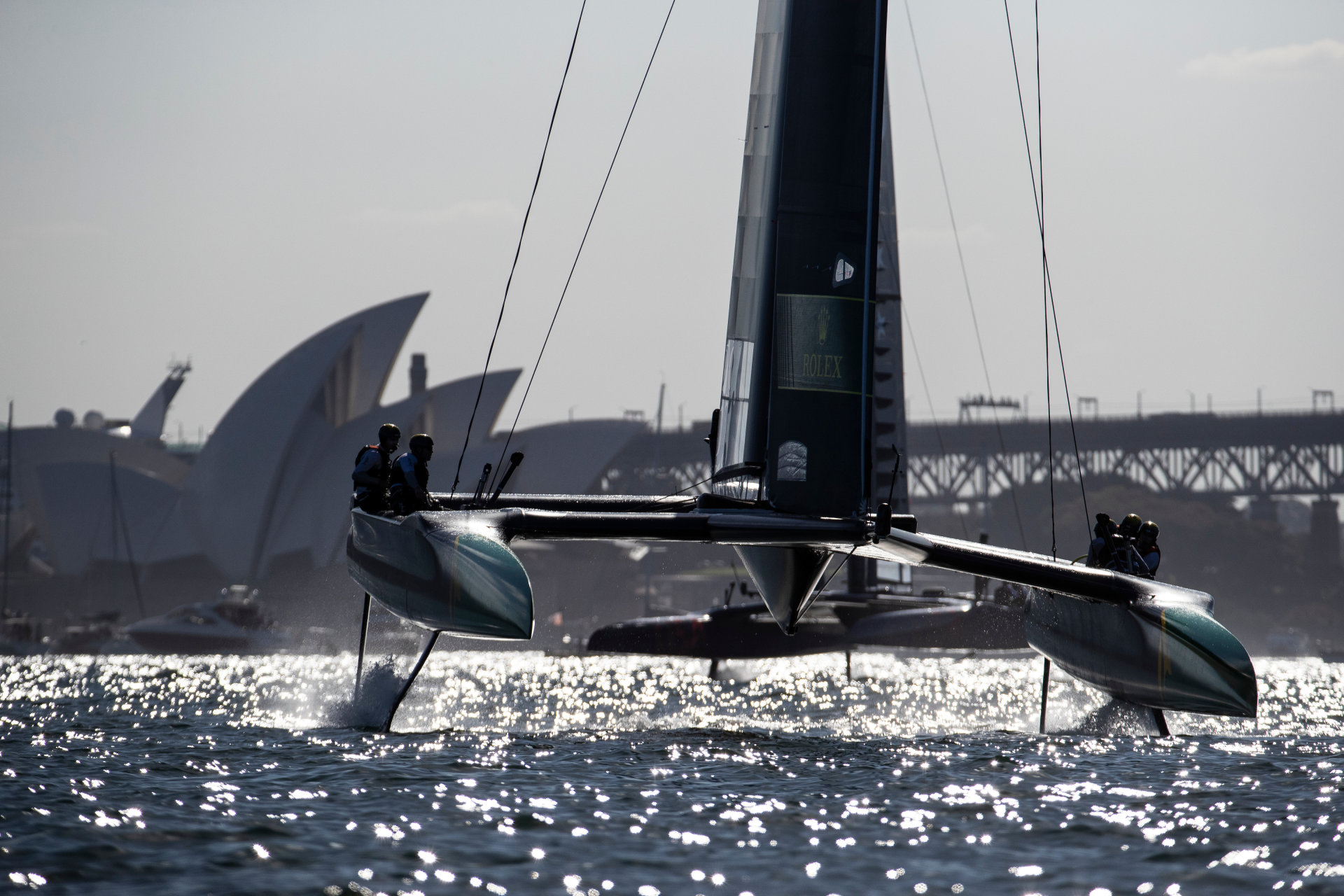 With just weeks to go to the start of the second SailGP season – exclusively for Yacht Racing Life – Rob Kothe speaks to the global series’ instigator, CEO Sir Russel Coutts, and some of the top skippers on the international circuit.

The second season of the Larry Ellison funded, Sir Russell Coutts run SailGP series, will start in Sydney Australian on February 28-29. I was in Madrid last night for the launch of the Spanish SailGP team, and there were several interesting observations about the future of this series.

I talked at length to Coutts during the afternoon as his team prepared for the Press Conference.
As he has before, he emphasized the unique nature of the SailGP package. National teams, one design, evolving high performance, close racing and lots of racing in iconic venues around the world. And gasp, shock horror, the vital necessity for funding sustainability.

There was a recap. The circuit launched a year ago with six teams. A lot happened in the off-season. A changing of the guard with the British team, now led by Sir Ben Ainslie with backing from INEOS. Ainslie’s decision to join the circuit was influenced mainly by the amount of sailing his AC75 squad needed.

Then it was Denmark’s Rockwool who are fully funding their national team.

China dropped out after season one but was immediately replaced with the Spanish team, now having meaningful discussions with numbers of potential Spanish sponsors and an eighth team, also full funded is not far from going public.

In season 1, Tom Slingsby and his Australian Team and Nathan Outteridge with Team Japan dominated the circuit, but the speed with which the neophytes from China, Great Britain, France and USA came on quickly.

The key to the advancement of the second group was the instantaneous sharing of telemetry from all the boats. That meant they could quickly learn to tack like Tom and gybe like Nathan and dry laps soon became the norm across the fleet.

Coutts talks past and future

‘We were disappointed to lose China,” Coutts said. “For us, it was necessary to have events within teams’ countries, and we needed to secure rights to use the Chinese flag on the sails in China, and then further difficulties arose. We anticipate a Chinese team will return, at some time in the future. No doubt with the support of a strong Chinese company.

‘Meanwhile, Spain was very keen to join the circuit. They had a tight group of very talented sailors who were very eager to commit.”

So, now it’s the turn of the youngest new team. The Spain SailGP Team features Olympians and world champions from across the country and will be the youngest team to compete in the world’s fastest sail racing.

Jordi Xammar will helm the Spanish entry following the 2020 Olympic Games, with SailGP veteran Phil Robertson serving in an interim capacity to start the season. Robertson a former World Match Racing Tour champion was impressive in season one taking an inexperienced Chinese team onto the podium.

I talked to Robertson, earlier in the day. “I’ve done a lot of F50 sailing in the last two months,” he told me. “I commissioned the new segmented wing sail and did initial training with Spanish. I’ve done a good 20+ days. It’s been good to get more comfortable, and I feel like I know the beast.

“It’s a shame that Chinese outfit shut down. Politics get in the way of sport sometimes. I was gutted when it happened, but I was offered the opportunity to get the Spanish up to speed in their first season, while so many of their team have Tokyo programs.” 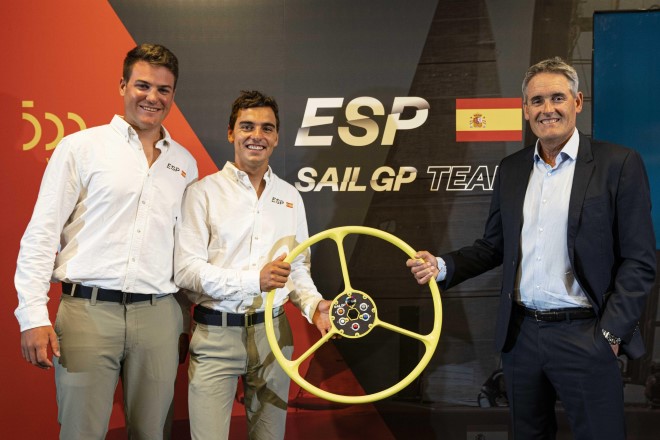 Xammar along with Botín, Bugallo, Cardona, Rodríguez and Trittel for the 2017 Youth America’s Cup in Bermuda.

‘Their early trials in New Zealand with Phil who has been able to fast track them in these early days have surprised everyone,” Coutts weighed in.

“As we have data coming off the boats, we can see just how they are going. They were sailing dry laps very early in their tight course practice and are already at a similar standard to where China left off in Marseille.

“In fact, both the Spanish and Danes are performing at a much higher level than the 2019 teams were sailing in Sydney a year ago. Of course, it will be much harder in a fleet of seven boats all sailing close with disturbed air. But it shows that the open data availability and ever-improving control systems on the boats are making it much easier for new teams to join the tour and become competitive very quickly.”

Another development is set to reduce the barriers to entry further and impact the quality of the event package commercially.

Coutts again: “We’ve been working hard on new wing sails to extend the wind ranges high and low that we can sail in and we will have these on all the boats by San Francisco.

“But in Sydney both new teams Denmark and Spain will have new wing sails, and that will give them a little advantage. These have a much better control system. There are more control points on the wing. That means the trimmer can adjust the wing twist more accurately, will be able to power up much more efficiently than they used to, in light winds and out of the manoeuvres and in heavy winds, they will be able to depower better.”

Robertson commented: “The old wings required a real mission to get your head around. It took half of the first season to learn how to tune them well. Whereas the new wing in almost plug and play. You can program in settings at the push of a button, and off you go. This dramatic reduction in learning curve is another step in making new teams rapidly competitive.”

Tom Slingsby: “Spain will be strong. Phil is a great competitor. Obviously being a world match racing champion if he can get his team in the top two boats, he is a massive threat to win the match race finale. He has done more sailing than anyone in the F50, so we are expecting him to bring them up the ranks fast.

“INEOS, I feel, are probably the favourites with us, I believe. They have a team that lives and trains full time together and plenty of resources. They will be up the front for sure.

“I think Denmark is going to have to climb the hill. Plenty of talent on board but not a heap of experience. I’m not expecting them to be winning events but who knows, they may surprise.’

Phil Robertson: “It won’t be all roses for numbers of the team, Team Japan has lost two key members, Denmark and we will be on steep learning curves.

“INEOS should be strong with Goobs and then Ben with a lot of AC50 experience. But its Tom we all must catch.”

After Sydney, SailGP returns to San Francisco (May 2-3) and New York (June 12-13), ahead of the first European event of the year in Cowes on the Isle of Wight (August 14-15). The remainder of the schedule will be announced in February.

And then the kicker from Coutts:

“The eighth boat is mid-built, and we are in advanced discussions about its fully-funded team.”